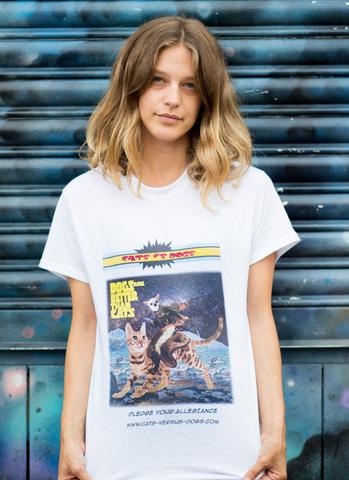 Dogs Are Better Than Cats

You can now pledge your allegiance in the cats vs dogs debate, with new T-Shirt brand… Cats Vs Dogs.

“I could see how heated things were getting: cats are everywhere and dog lovers – albeit equal in numbers – are nowhere near as vociferous in their support as their feline counterparts – mostly because cats are vain and love having their picture taken and love having them shared on social media even more. This has led to a profound feeling of voicelessness among canine supporters, and thus a seething undercurrent of emotion which threatens to spill over into violent conflict. All of this can be avoided by wearing a coat of arms in the form of t-shirt – an ensign siding you with your favoured domestic quadruped – and helping them in a manner befitting a classy and peaceful tribal rivalry.”

Cats Vs Dogs is offering people the chance to pledge their loyalty and declare their faith with these uniform t-shirts and tote bags serving as an insignia of honour and dedication to their legion.

It’s simple: If you’re in the feline faction, don a ‘Cats Are Better Than Dogs’ T-shirt or carry a tote bag carrying the same maxim and vice versa if you’re in the canine clan.

The leader in the race for dominance is determined (as a percentage) by which domesticated quadruped has the most products purchased in its name.

There’s only one thing left to say here – dogs are better than cats.