Big waves are coming across the Channel: an intriguing mélange of smoky Gallic chanson and upbeat French electro synth-pop is on its way over from a talent who wears her ambition, emotion and attitude very much on her sleeve. That sound is from Flora Fishbach – known simply as Fishbach – who released her exploratory début album, À ta Merci, internationally earlier this year.

Having made quite an impression in her native France in 2017, Fishbach is hotly tipped to capture the imagination of the English-speaking world this year. FMS spoke with the busy 27 year-old from Normandy about the whirlwind of her last 12 months, growing up in the north of France and her enchanting new album.

Fishbach, when she was younger, moved from the north Normandy coast to Charleville-Mézières, close to the Belgian border. It was there where she struck up an unexpected relationship with American singer-songwriter, Patti Smith.

“She’s come to my town Charleville-Mézières very often,” she tells us. “She’s worldwide famous but has an attachment to my town because of [symbolist poet] Arthur Rimbaud. Each time she came, she performed. I saw her when I was 18. At this time I didn’t realise aura was as important as music. And she has that charisma! She gave me this strong lesson about charisma. She’s like a mother to me.”

‘That charisma’ is clearly something that has moulded Fishbach, both in her songwriting and in her live performances. Having toured extensively across France with her band, Fishbach played SXSW earlier this year, playing in America for the second time, and has so far eschewed the temptation to switch to English on stage.

“I’m always happy to sing for people who don’t speak my language, because I feel they understand what I mean even if they don’t speak my language. I’m glad to live in this time where you can sing in your own language and travel thanks to this. I was so proud to represent France with my music there and can’t wait to be back!”

Dieppe-born Fishbach released her début album, À ta Merci, in France last year and internationally earlier this year. The album caused quite a stir across the Channel, winning Album Révélation at Le Prix des Indés, the coveted French prize for best independent début of the year.

However, that prestigious acclaim has clearly not gone to her head, as it may well have done with others. “For me, it has changed nothing,” she says, with her feet very firmly on the ground. “It’s really encouraging but I don’t need recognition. I feel proud for my musicians and for my team, but I don’t really care for myself.”

From the very first listen, it is clear that À ta Merci has been carefully constructed, with a very precise production coming from Fishbach herself. Each song has been shaped in what reveals itself to be a distinctive Fishbach style without losing its individual character, using combinations of synth, rhythm, tempo and raw vocals to varying degrees and to great effect. The result is a very polished mix of Francophone electropop, which is underpinned by an undertone of dark mystery; no song strays too far into the uplifting category without being pulled back down to earth by an element of pensive unease.

‘Ma Voie Lactée’ is a strong album opener, pumping a stoccato-disco sound around a solid vocal hook and jumping straight into the electro-synth-pop that runs through the arteries of the record.

‘Le Meilleur de la Fête,’ with its pendulum-ticking bassline, has a sound reminiscent of the early ‘80s electronic movement, but Fishbach’s despairing vocals somehow bring it up to date and retain that very French charm.

‘Y Crois-tu’ is characteristic of the mixture of the upbeat and sombre; the fast and slow; the warmth and desperation that exists to a greater or lesser extent in many of the album tracks, with a belting chorus providing a counterweight to its overall solemn feel.

The album offers breathing space through some softer instrumental interludes and ballads, including the dreamy ‘Un Beau Langage’ (which is reprised later on in the album in Arabic) and the reflective title track, ‘À ta Merci.’

However, the pick of the album comes later on: ‘Mortel’ (‘Deadly’) is a near-perfect balance of vocal talent, sung from the heart and retaining the tenacious rhythm that drives the song through the steadily building verses and the unfiltered emotion of the chorus.

‘Un Autre Que Moi,’ with its heavily-synthesised bassline, would not be out of place in the late 1980s, but again it is the lyrical passion that makes for a superb rhythmic track that’s impossible not to move around to.

The Deluxe Edition of the album features a number of live tracks from her sold-out performance at Paris’s Bataclan, capturing the intimate atmosphere generated by a clearly appreciative audience.

Fishbach began this album at the end of 2013, which “is the result of three years wandering around.” Indeed, À ta Merci is clearly a very personal reflection of herself: “Each song is a part of me; sometimes a little girl, sometimes an old woman, but all the time questioning romanticism.”

However, it is evident that Fishbach’s music is not made just for her. She has previously described every song as being ‘like a painting’: “I want to free one’s imagination,” she says, noting that everyone has their own interpretation of the meaning of a song, like they do a painting.

Her childhood growing up watching the sea in coastal Normandy has had a profound impact upon enhancing her own imagination. Although Fishbach now lives in the city, she misses seeing the horizon, stating rather profoundly that “imagination works when you’re looking at the sea because it’s mindless and you have time to think about your life. Everything can change; waves will always remain. It’s a bit like looking at the stars.”

Now her début album is done and dusted, Fishbach is writing new songs and preparing her second album, which she hopes to release next year. Interestingly, she is also composing a soundtrack and turning her hand to acting, with a strong desire to work with others and embrace any new projects that come her way.

A multi-talented individual who is certainly demonstrating ‘that charisma,’ Fishbach’s début offering is a strong one and will equally suit a Friday night or lazy Sunday morning.

Fishbach plays at The Lexington, London, on 25th June. 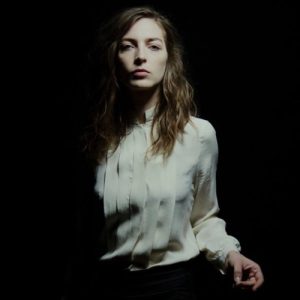