The three track EP marks something of a new beginning for the young Irish band – completed by singer/songwriter, Eoghan O’Hagan, and pianist, Luc McParland – with a fresh new sound, abbreviated band name, and new home town to boot.

Recently named one of BBC Northern Ireland’s hottest new acts by Huw Stevens (Radio One), the band toured the UK and Ireland extensively in 2015, and following a huge response to their appearance at last year’s Sound City Festival, they moved from their native Belfast and set up shop in Liverpool in early 2016.

Young Hearts – produced and mixed by Rocky O’Reily (Wheatus, Ex Magician) – is the result of an intensive writing period for 19-year-old O’Hagan, who locked himself in his flat for three months until he was happy with the results, such was his dedication to the project.

The video for title track, ‘Young Hearts’, was directed by Darren Lee, who O’Hagan has been working with closely for a year now, “We feed off each other’s ideas a lot. The concept for this video was a spin on what the song is about – we fall in love young, spend time with that person, but as we make the change from teen to adult we become an almost different person, and you kind of have to renew the love, or you just don’t have it. This is just that, with the main guy realising he was gay as he grew older.”

‘In My Bones’ and ‘The Child’ crash along at an equally invigorating pace, completing an EP that touches on tender themes, inspired by reflection and awareness. We caught up with O’Hagan to find out more, but first up, check this out…

How was it growing up in Ireland, and how did this impact on you as a musician?

Great, there is an amazing music scene that constantly helps each other. In terms of writing, I lived in the middle of nowhere surrounded by fields. We used to take hikes up mountains and go swimming in lakes when it was sunny (one day a year), really inspiring.

How does the music scene in Belfast compare to Liverpool?

Well, initially what I have noticed is there are mid-level bands playing Liverpool, which usually Belfast was skipped on a tour schedule, so that’s great. Mainly there is more people here, more people means more musicians, and there seems to be a big beautiful community here.

When did you and Luc come to meet and start playing music together?

So I quit education when I was 17 to focus on my art (parents loved that). I was passing by my old college, which Luc was studying in at the time, and got chatting. We went into the studio played together, which felt really natural and good, he has been at my side ever since.

You previously played under the name His New Atlas; when did you decide to drop the ‘His’ and does this mark a fresh start with a new sound?

The name drop is a little complicated, as yes there was a rebrand in place, but there is more to it. His New Atlas just finished recording this EP and it all felt, and sounded different, and in the background of all this we all lived together. Living together got to be hard when there was financial stress you know, our heating and electric got turned off when I had pneumonia. Living of porridge and eggs. That actually split us up. So New Atlas is something I see as a new band.

How have your influences changed since you started out, and what was the inspiration for the new songs?

I think what I write is what inspires me yes, but not in a certain period of my life. I have a range of influences from Jeff Buckley, Sigur Ros to Two Door Cinema Club, and Bombay Bicycle Club. My music is somewhere in between I guess.

You locked yourself away for three months to work on the EP; what was the song writing process for you and at what point did Luc become involved?

So at this point I felt really let back as we had some big promises towards the end of last year that didn’t go through. This crippled me inside because I was so overworked, I felt there was no more hope or energy to fuel a new release.

I ended up never leaving my room, stopped talking to people, my girlfriend at the time hated it and we ended up finishing. But being locked away I was listening, playing, and writing for 18 hours most days. I wrote 20 songs, brought 15 to Luc, and then we chose three.

How did you come to work with Rocky O’Reily, and what do you feel he brought to the project?

Rocky has played a big role in some of my all-time favourite records, so he was always what I aimed for. I think he got in touch after liking one of my old tracks, then we got working together. As well as an amazing producer he has helped me out a lot. When going to the studio I never left enough air or room for last minute inspiration, or experimentation. I came in with a list and we followed it. Rocky told me, “No list!” That was cool of him.

How was it working with Darren Lee – I note he has worked on your previous videos?

How was it working for him? The guy told me he seen a ghost in my house, so I didn’t get my usual six hours sleep. He got me a Chinese though, I forgot how good they were.

You’re playing your “first ever show” as New Atlas, at The Finsbury in London on May 1st, will you be playing all new material?

New Atlas is a new band, and that meant to keep writing. It’s a whole new set. We are going to be playing something we are going to record soon. It’s different from Young Hearts, but I think everyone will like it.

Young Hearts is out now. Catch New Atlas live on the date below, and check their website for more. 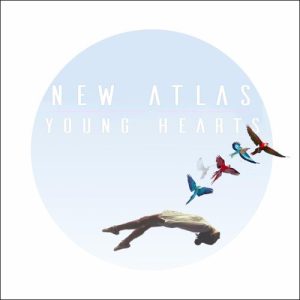