ISHU: Meet the Man Keeping Celebrities in the Dark

Anonymity is a rare thing in this day and age, and where fashion is often used to propel oneself into the limelight, one man is doing the opposite of just that.

Saif Siddiqui is the founder of the ISHU brand, and the world’s first anti-flash scarf, a garment that cleverly absorbs the light in a flash photograph, thus protecting the wearers privacy. Launched just last October, ISHU has already received a positive response from a wealth of celebrities, being worn by the likes of Nick Jonas, Jeremy Piven and Cameron Diaz.

He arrives to our interview dressed in a long black coat, swathed stylishly with his anti-flash scarf, and as we talk it soon becomes clear that although popular among A list stars, reaching celebrities is not what Siddiqui cares about most. The main aim of the ISHU scarf is to bring back privacy in an age where everyone uses social media. Platforms such as Instagram, Snapchat and Facebook have thousands of photos uploaded every second, and not all of this content is approved by us – the ones being photographed daily in situations that we don’t necessarily want to share with others. We live in a world where we have lost our privacy and the ISHU scarf returns the right to anonymity to the wearer – it was created to help anyone who wants to protect their privacy.

The idea for the ISHU was born six years ago in Amsterdam, when a friend took a picture of Siddiqui standing next to a bike. The reflective surface of the bike absorbed the flash, making him disappear from the picture. That was it – the beginning of something huge that could make life in the 21st century just a little bit better.

All kinds of different fabrics and designs were tested until he reached his idea of the perfect scarf, and he laughs when I ask him about the initial production of the scarves, explaining that he has ‘boxes’ of prototypes still in his flat in London. The development was difficult and time consuming, but so was building the right team, and it’s Siddiqui’s diverse and talented social network that is also a key to his growing success, “I am a perfectionist, so I wanted to build the right team around us, to find the right people to help us, to make sure that I always give a hundred percent.”

The day before the launch, Siddiqui was still without a name for the brand – throwing away wild ideas such as ‘Privacy is Back’ and ‘Fuck the Paparazzi’, as none really captured the brand the way he wanted. It was his hip-hop artist friend, Bento, who came up with the idea of ‘ISHU’, as in “I” – “SHH” – “YOU.” These short words hidden in the brand’s name, perfectly expressed the philosophy of the company, which is to stop others from taking away our privacy. 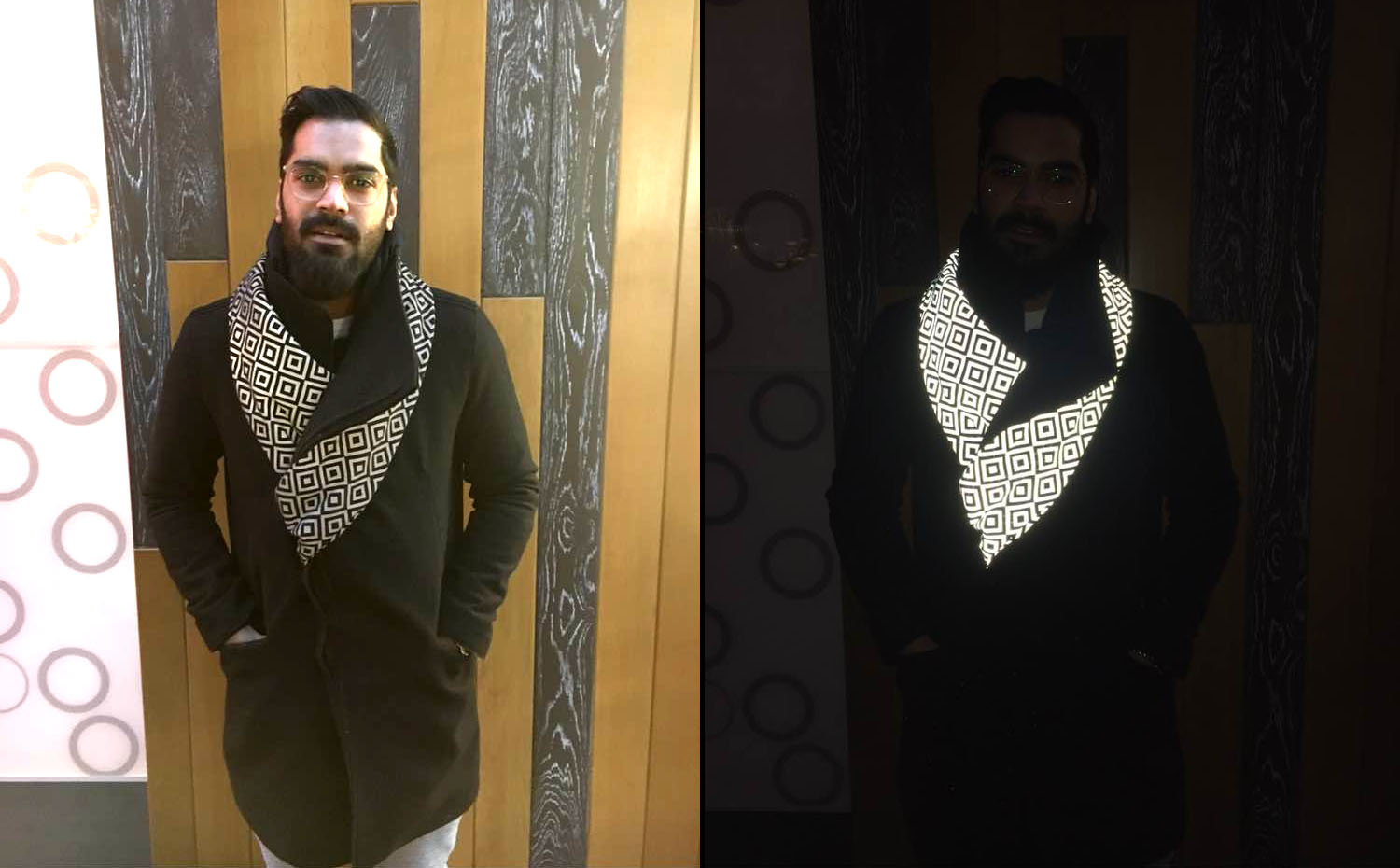 “I quit my job at IMG, which was a big risk – not to launch a piece of fabric, but to make something new and make a change,” he explains. Siddiqui had a good job at a prestigious company but wanted something more. Now he is both his own boss and his own biggest motivation, and with so much work going into the brand, he has to be disciplined. ISHU is “his everything,” and he has dedicated his life to it.

With a head full of creative ideas for future projects, he is now set on realising them. Like any true entrepreneur, he can’t remember the last time he took a day off, and is currently working on his new collection, which will include hoodies, hats and clothes for children, with a launch planned for mid-April. Also in the pipeline are pop up stores with limited collections.

“I have not studied fashion design and I have never dreamt of being a fashion designer. All I wanted to do is to express my idea in products, such as anti-flash clothing,” he says, admitting that he’s not yet satisfied with the scarf. “Sometimes people congratulate me… and I do not know how to react, because I am not fully satisfied yet. At the moment it’s a cool scarf. I always want to create more; I want to spread the whole idea wider.” He dreams about bringing the concept of anti-flash to interior design, particularly in clubs and even theme parks and museums. All venues that require privacy should hear about ISHU, and that’s what we wish for Saif Siddiqui too; after six years in the making, he totally deserves it.

All products, anti-flash scarfs, ties and pocket squares, are available at www.theishu.com and the South Kensington pop up store in London. The ISHU boutiques can also be found across Holland, Germany and South Africa.