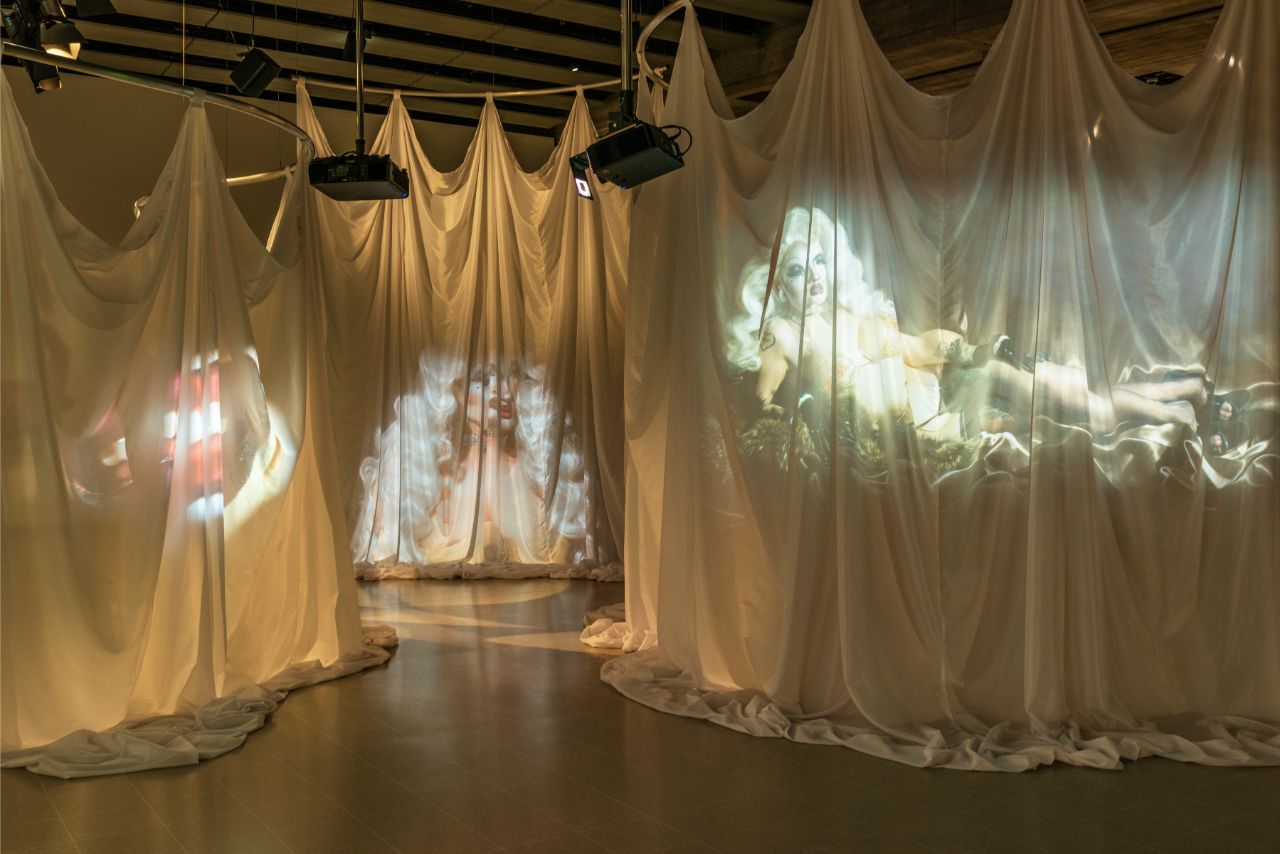 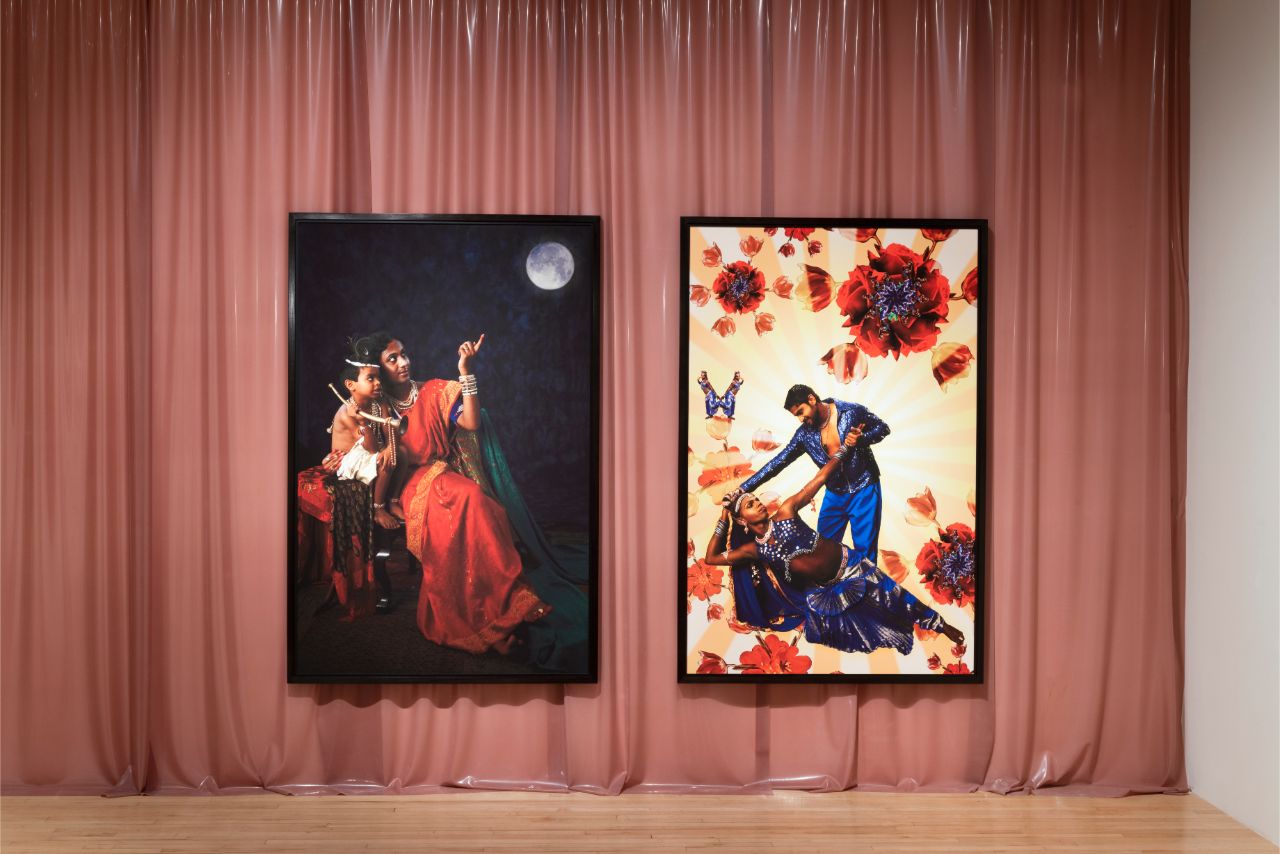 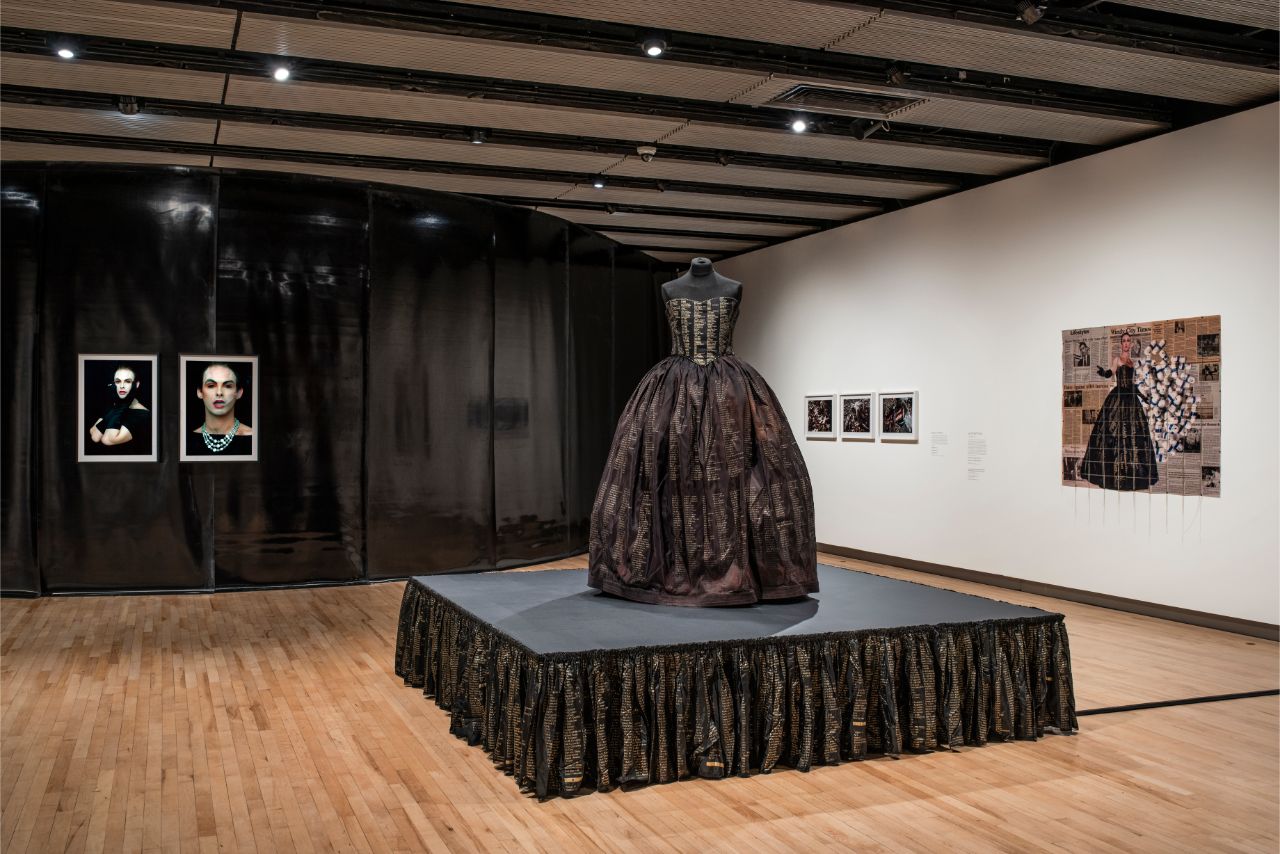 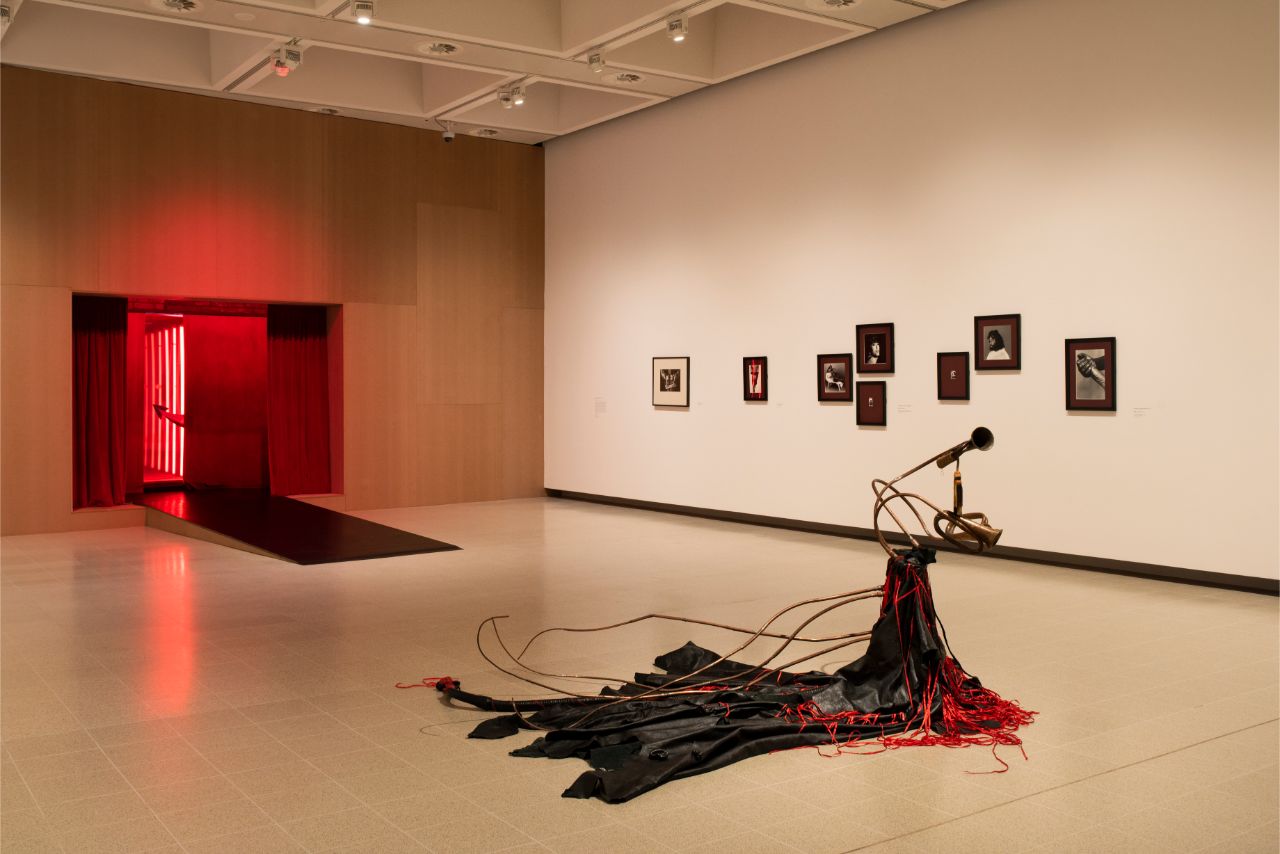 With its title borrowed from the lyrics of Planningtorock‘s ‘Transome’, Hayward Gallery‘s Kiss My Genders brings together more than 100 artworks by 35 artists from around the world, some of whom were born almost a century apart. Spanning 50 years and employing a wide range of approaches, these artists share an interest in articulating and engaging with gender fluidity, as well as with non-binary, trans and intersex identities.

“I get excited about terminologies around fluidity or liquidness in sexuality and gender. I think the whole thing should be hugely playful and open.”

“I get excited about terminologies around fluidity or liquidness in sexuality and gender,” said Jam Rostron (aka Planningtorock), whose portrait features in the exhibition. “I think the whole thing should be hugely playful and open.” Rostron sings using gender-neutral vocals and often queers their appearance for performances and photo shoots, using temporary facial prosthetics like the ones seen in the portrait on display.

While the artists in Kiss My Genders work across a wide variety of media – including installation, video, painting, sculpture and wall drawings – the exhibition places a particular emphasis on works that revisit the tradition of photographic portraiture. A number of artists in the exhibition treat the body itself as sculpture, and in doing so open up new possibilities for gender, beauty and representations of the human form.

Juliana Huxtable‘s Untitled (Lil’ Marvel) also serves as the promotional artwork for the exhibition. As an artist, poet, performer and DJ, Huxtable is often the subject of her own work, with the fantastical self-portraits featured within Kiss My Genders being informed by science-fiction. “I think it’s really important that as a black trans woman I have the right not to be documentary, to not have to be literal,” she states.

Featured in the second room of the lower galleries is the work of Del LaGrace Volcano, an artist committed to ‘disobedience, disruption and defiance of gender norms.’ In the 1980s, Volcano was involved in the formation of London’s first lesbian sex and performance club, Chain Reaction, and in the mid-1990s, became involved with the emergence of the city’s drag king scene, which informed their later publication, The Drag King Book (1995). Included in the collection of five intimate photographic portraits on display – described as a ‘visual road map of euphoric, turn-of-the-century queer London’ – is Marc Angelo Almond (1992) and Robyn: Cold Store Romance, London (1988).

Martine Gutierrez also acts as model, stylist and photographer in her engaging photographic series, Masking and Demons; both featured in her one-off publication, Indigenous Woman (2018). The Brooklyn-based performance artist characterises identity as something ‘alien and unfamiliar’, and this certainly comes across in the Masking series, which utilises fish, fruit and vegetables to create surreal masks. Demons, on the other hand, sees Gutierrez play with the identities of Aztec, Mayan and Yoruba, as she explores the role each deity served in their own cultures versus their interpretations by the West.

Visual activist, Zanele Muholi, uses photography as ‘a space for people to be visible, respected and recognised’ and brings inanimate objects to life, as elaborate costumes or backdrops that hold deep psychological importance, through the ongoing Somnyama Ngonyama: Hail the Dark Lioness series, which began in 2012. Muholi began documenting the black lesbian and transgender community in South Africa in 2006, and has deliberately enhanced the dark tones of this series, stating: “I’m reclaiming my blackness, which I feel is continuously performed by the privileged other.”

Peter Hujar‘s intimate black-and-white photography features portraits of friends and acquaintances from the group of artists, writers and performers that he lived and worked with in downtown New York, during the 1970s and ’80s. Among them are drag performers, Ethyl Eichelberger and The Cockettes, and filmmaker, actor and writer John Heys. “I like people who dare,” said the artist, who also regularly photographed the streets and public spaces around New York City, the abandoned buildings along the Hudson River waterfront, and the river itself.

Sections of paintings erupt from the work of Flo Brooks, such as the excerpt above. “I was thinking a lot about the kind of hygienic spaces I’ve traversed through my hormone transition and mental health support,” said Brooks; ‘spaces designed to clean, conceal and correct’ things that are considered ‘dirty, abnormal or other’. A fictional cleaning company, Scrubbers, features in U Bend but it’s still a trap and YESSIR! Back off! Tell me who I am again? (both 2018), with cleaning products taking on loaded titles and bodily matter, dirt, chemicals and pharmaceutical products clashing in a style reminiscent of artist and fashion designer Philip Colbert (The Rodnik Band).

The highlight of the exhibition was the multimedia video installation by Jenkin van Zyl – entitled Looners – which after 30 minutes of viewing leaves one feeling like their mind has been assaulted. With rusty weapons protruding from arseholes, and a cake effigy being crumbled and smeared all over the one it resembles, Looners is hilariously perverse and not one for the squeamish. As far as installations go, this one is all-consuming. With loud, surround sound, additional side screens, and seating just two rows deep, there’s no turning away from the action. In fact, the seating is so close to the screens, that after 30 minutes it may well give you a pain in the neck.

Jenkin van Zyl is interested in the slippages between gender identities, and embraces ‘multiple selves, instability and deviance’. The artist filmed most of Looners (2019) in a huge complex of decaying film sets located in the Atlas Mountains. Deliberately queering the macho history of violence, Van Zyl’s ecstatic cinematic fantasy – ‘a tribute to the gang of queens’ the artist performs with – is concerned with both reclaiming autonomy and the pleasure to be found in abandoning all control.

The exhibition is accompanied by an illustrated catalogue featuring original essays by Amrou Al-Kadhi, Paul Clinton, Charlie Fox, Jack Halberstam, Manuel Segade and Susan Stryker, as well as an excerpt from Renate Lorenz’s influential Queer Art: A Freak Theory, and poetry by Travis Alabanza, Jay Bernard, Nat Raha and Tarek Lakhrissi. Also featured in the exhibition catalogue is a roundtable discussion between a number of the artists and exhibition curator, Vincent Honoré.

18 July – Troubling Gender, Photography and Society @ Royal Festival Hall, £12
Artists from Kiss My Genders discuss the ways in which queer artists from the 1980s onward have used photography to redefine gender and sexual identity, engage in political activism, and open up or disrupt the role of the photographic image. Chaired by writer and lecturer Paul Clinton.