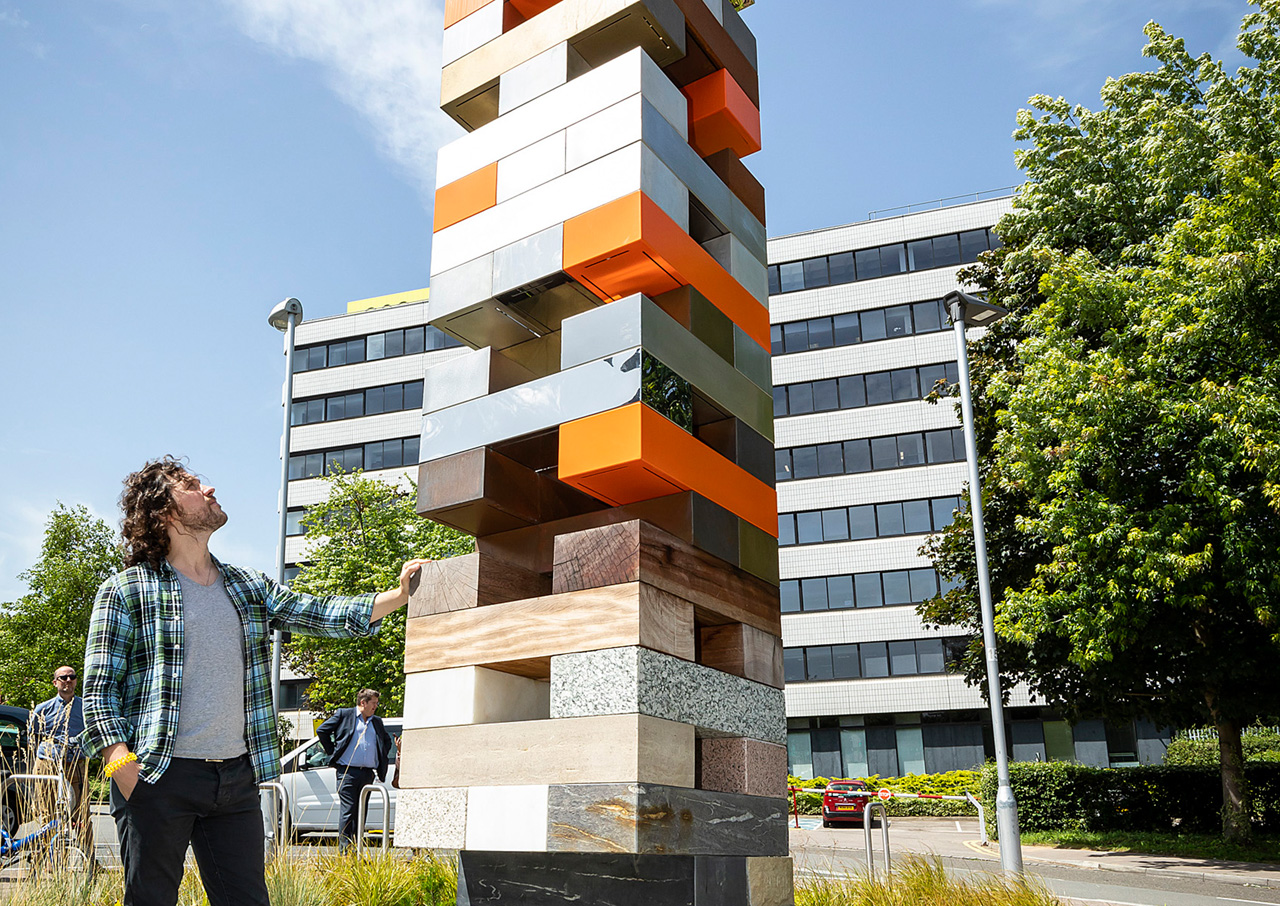 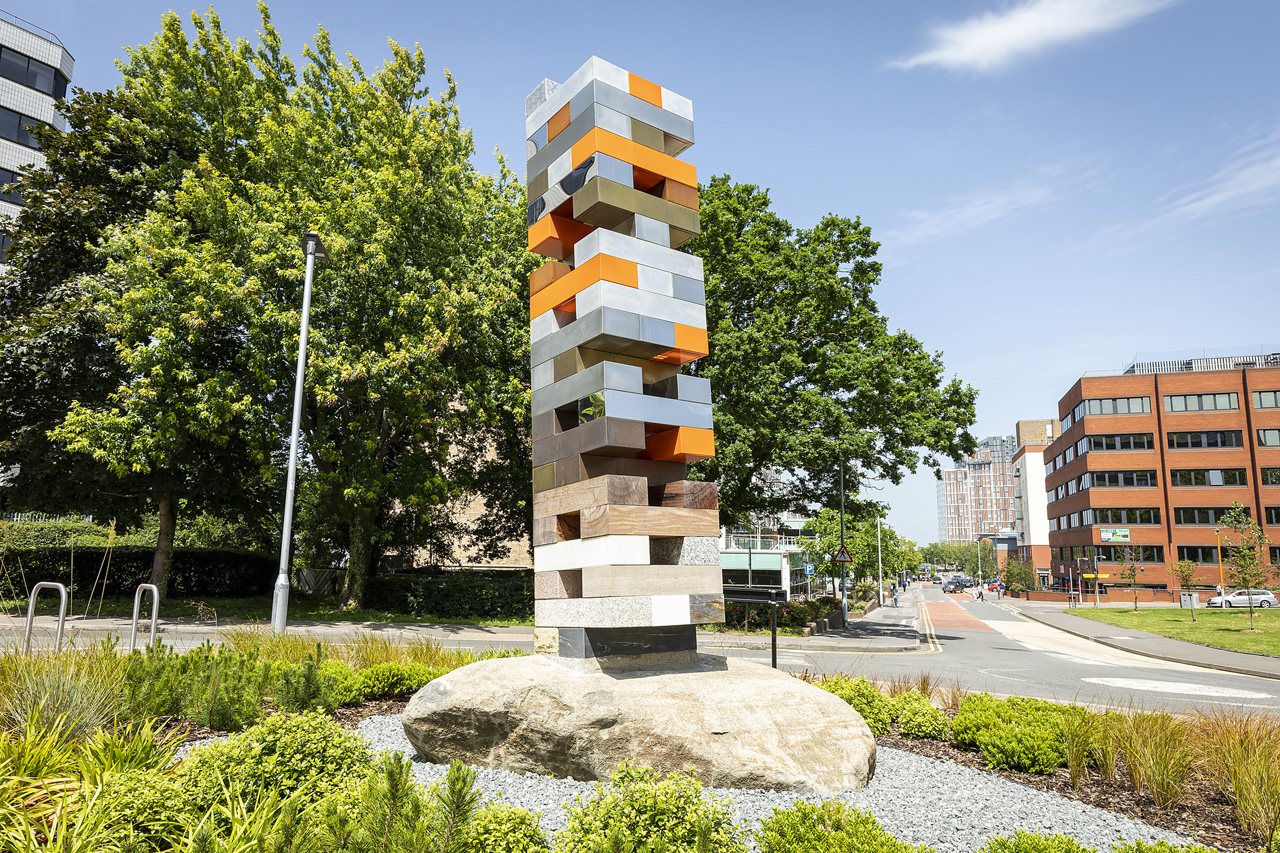 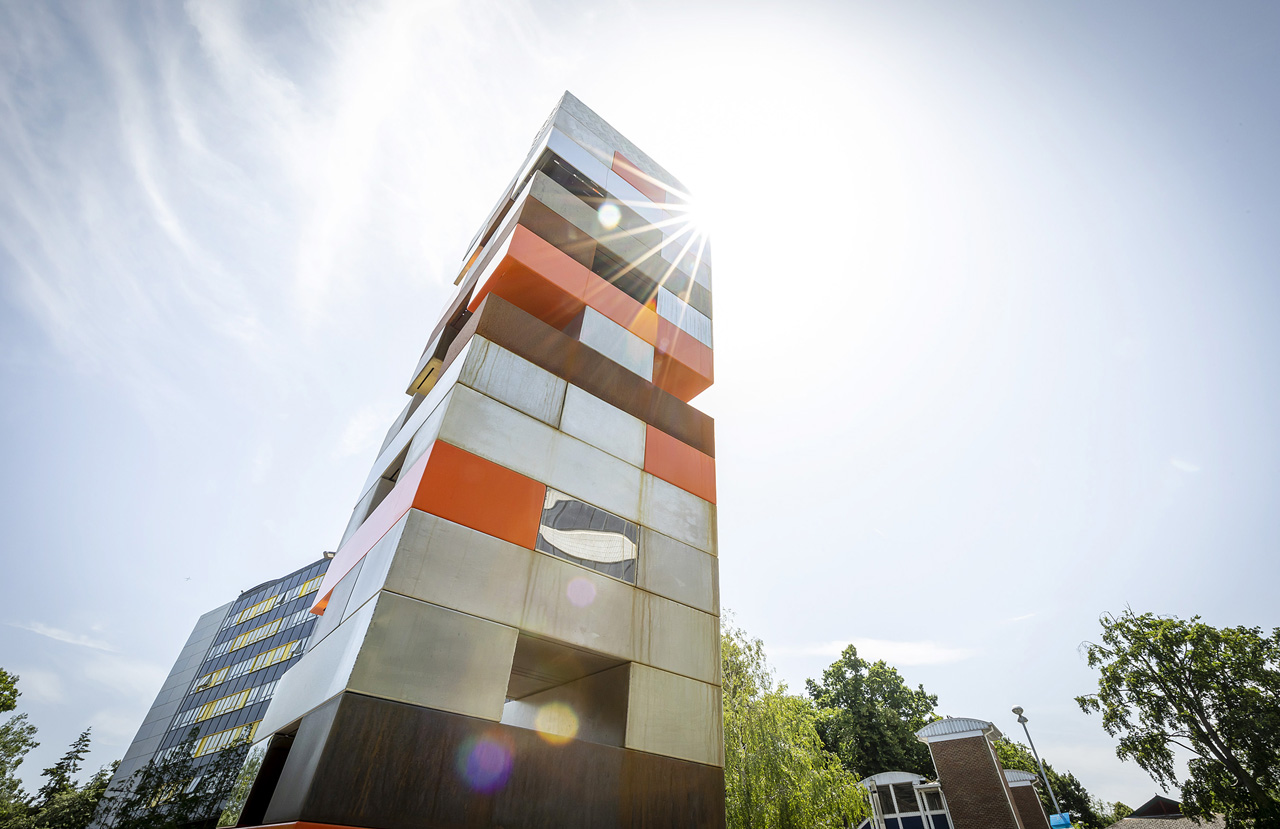 The official launch has now taken place for the latest public sculpture by Samuel Zealey. Onyo was picked by hundreds of people as their favourite piece to adorn the forecourt of Bracknell train station, as part of the GATEway Project, which was run in conjunction with South Hill Park Arts Centre.

More than 900 people voted for their favourite piece, with Zealey’s creation taking the top spot over four other contenders. Voters described it as ‘original’, ‘striking’ and ‘pioneering’, with Zealey stating at the time that he believed it was important to create thought-provoking public sculptures.

“I really wanted to put Bracknell on the national contemporary public sculpture map and I think Onyo serves this purpose.”

The sculpture was installed last November but required some planting and landscaping work to complement the sculpture, which has since been finished. A plaque has also been installed to provide information about the sculpture – which has all been paid for by developer contributions. The artwork was officially launched by Zealey as well as representatives from Bracknell Forest Council and South Hill Park on Friday, 28 June.

Cllr Marc Brunel-Walker, Executive Member for Economic Development and Regeneration, said: “The public were asked to pick their favourite piece during a showcase of different artistic designs at South Hill Park Arts Centre and the piece by Samuel Zealey was the clear winner.

“While the sculpture has been in place since November, it was only finished in its entirety this summer and so was officially launched on Friday. It’s been an innovative way of using developer funding to further enhance the cultural offering of our new town centre.”

The artist’s design sees a layered infrastructure emerging from a bedrock, which appears to reside at ‘tipping point’. With references to a recognisable, well-loved family game, the sculpture is playful yet thought-provoking. The design relates to Bracknell primarily through regeneration – the idea of progress (the continuous building of the structure) and a tipping point, leading to a new process of building.

The layers represent a visual history as it starts with archaic materials representing Bracknell’s humble beginning as a prehistoric town and develops systematically through the layers to newer materials higher up in the structure.

“Onyo has been a very ambitious project and a devotion of love which I am truly proud of,” said Zealey. “I really wanted to put Bracknell on the national contemporary public sculpture map and I think Onyo serves this purpose. With that said I would like to thank Andy Martin Associates, Stowe Steel (in particular Stuart Vincent), Ashwell Timber, D&D Engineering and the CED Stone Group (in particular David Smith), for all their efforts and professionalism. Their services to this project have been invaluable and truly amazing.

“I would also like to thank family and friends that have been involved in this project and BFC as well as SHP for this opportunity. I hope that the sculpture becomes an important landmark for Bracknell and that the people of Bracknell receive a lot of future enjoyment from this dynamic piece of contemporary sculpture.”

“Great art stimulates discussion and debate,” adds Craig Titley, Chief Executive of South Hill Park. “Today’s addition to the local landscape will become tomorrow’s masterpiece or treasured heritage. Inevitably we will all respond differently. ‘Controversy is part of the nature of art and creativity,'” he continues, quoting Yoko Ono. “Initially I am drawn to the visual familiarity represented in the Onyo statue, but the essence behind the piece, its link to Bracknell, the materials used and sense of time and belonging adds to our understanding and enjoyment of the work.”