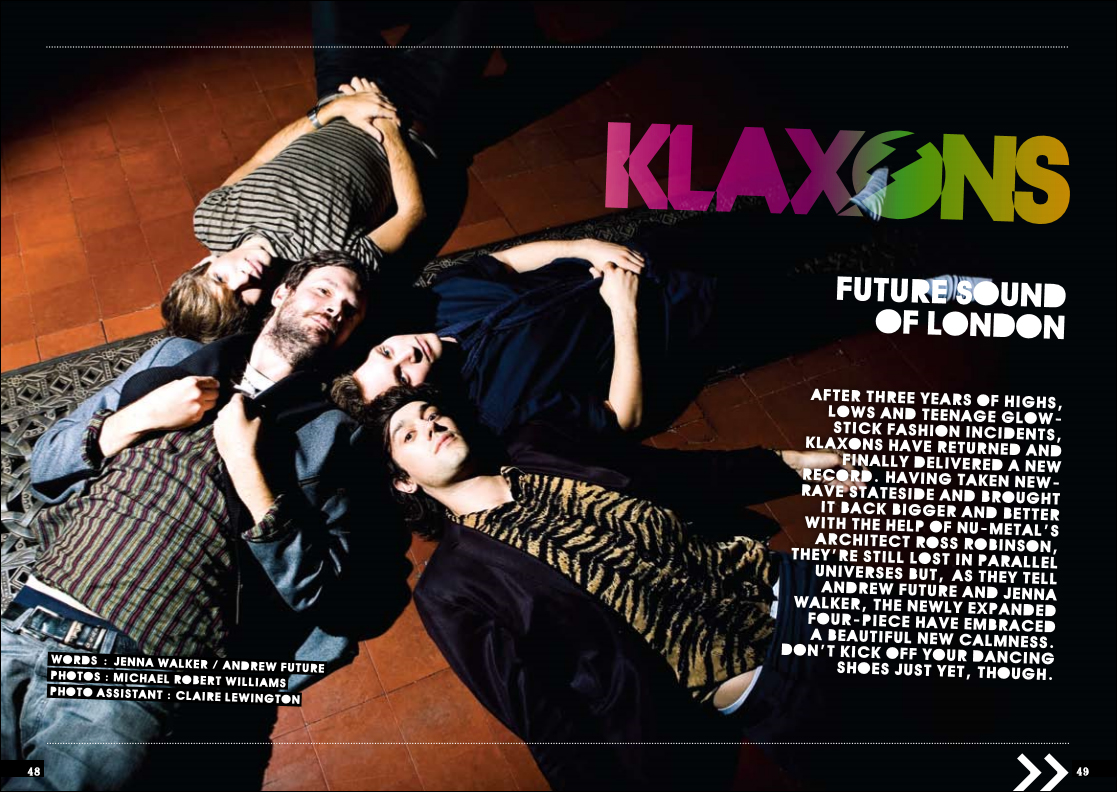 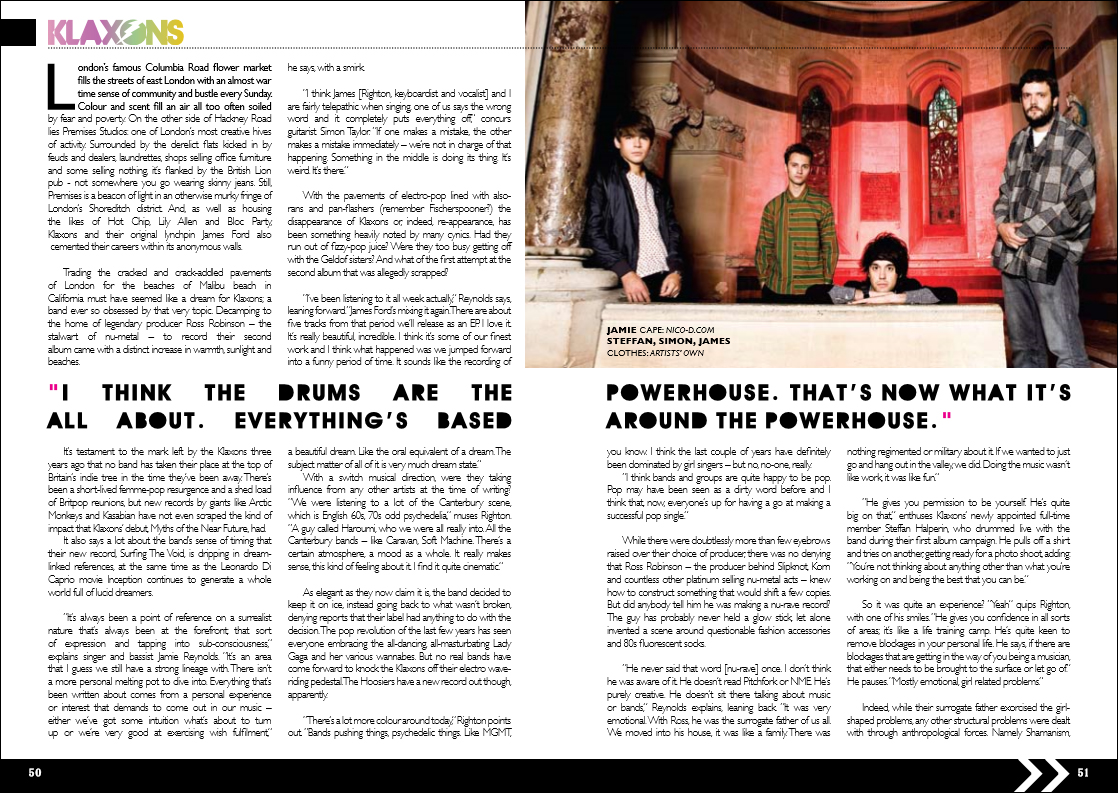 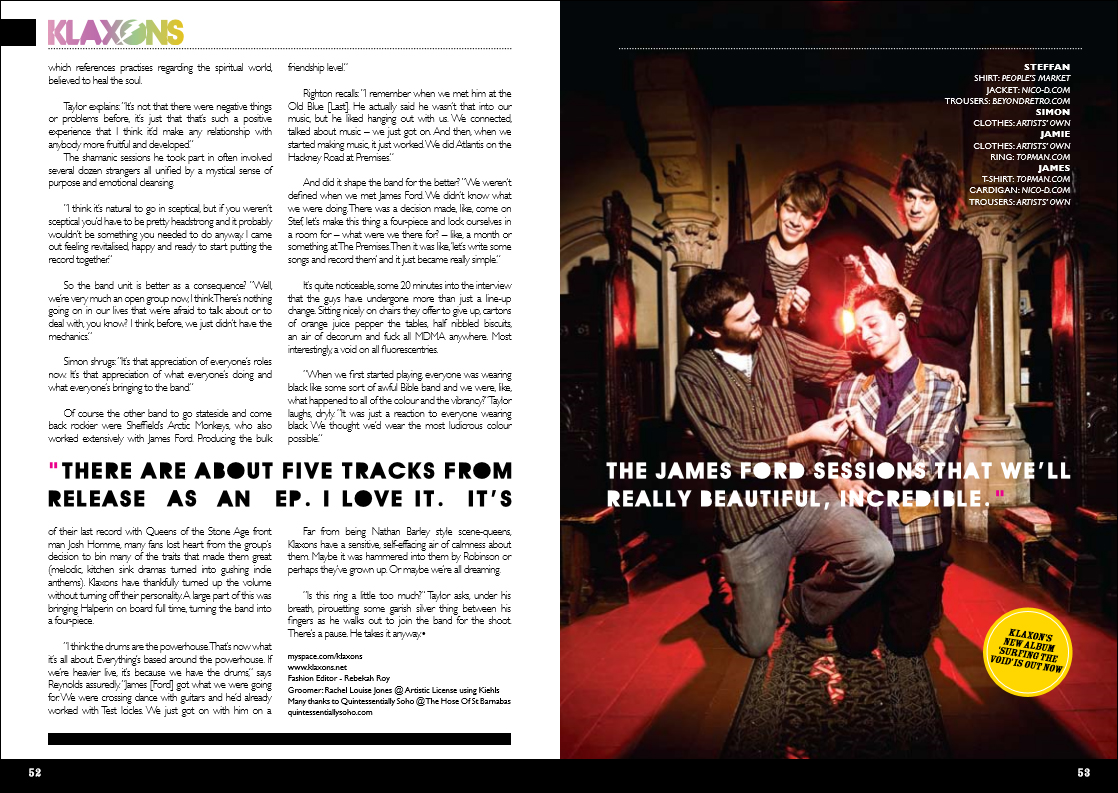 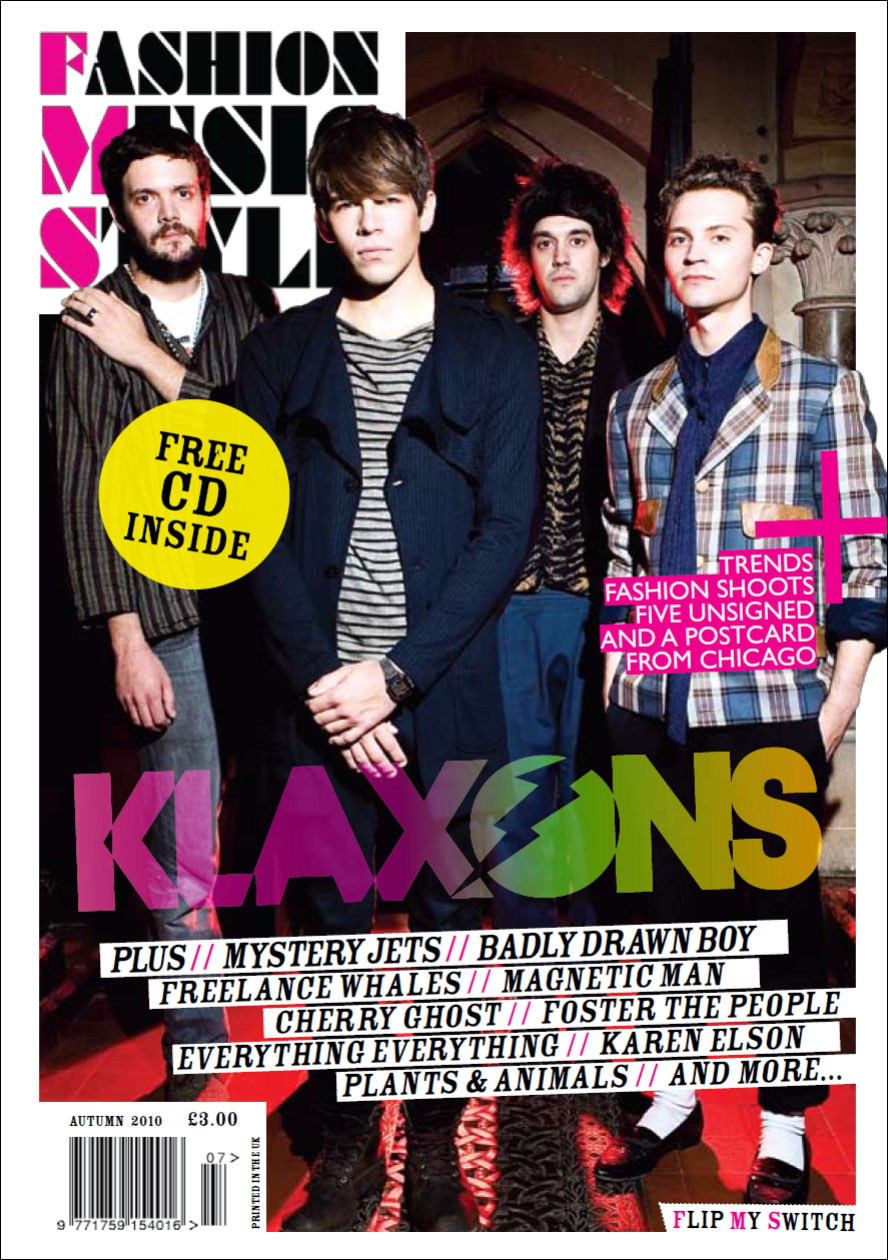 After three years of highs, lows and teenage glow-stick fashion incidents, Klaxons have returned and finally delivered a new record. Having taken new-rave stateside and brought it back bigger and better with the help of nu-metal’s architect Ross Robinson, they’re still lost in parallel universes but, as they tell Andrew Future and Jenna Walker, the newly expanded four-piece have embraced a beautiful new calmness. Don’t kick off your dancing shoes just yet, though.

London’s famous Columbia Road flower market fills the streets of east London with an almost war time sense of community and bustle every Sunday. Colour and scent fill an air all too often soiled by fear and poverty. On the other side of Hackney Road lies Premises Studios: one of London’s most creative hives of activity. Surrounded by the derelict flats kicked in by feuds and dealers, laundrettes, shops selling office furniture and some selling nothing, it’s flanked by the British Lion pub – not somewhere you go wearing skinny jeans. Still, Premises is a beacon of light in an otherwise murky fringe of London’s Shoreditch district. And, as well as housing the likes of Hot Chip, Lily Allen and Bloc Party, Klaxons and their original lynchpin James Ford also cemented their careers within its anonymous walls.

Trading the cracked and crack-addled pavements of London for the beaches of Malibu beach in California must have seemed like a dream for Klaxons; a band ever so obsessed by that very topic. Decamping to the home of legendary producer Ross Robinson – the stalwart of nu-metal – to record their second album came with a distinct increase in warmth, sunlight and beaches.

It’s testament to the mark left by the Klaxons three years ago that no band has taken their place at the top of Britain’s indie tree in the time they’ve been away. There’s been a short-lived femme-pop resurgence and a shed load of Britpop reunions, but new records by giants like Arctic Monkeys and Kasabian have not even scraped the kind of impact that Klaxons’ debut, Myths Of The Near Future, had.

It also says a lot about the band’s sense of timing that their new record, Surfing The Void, is dripping in dream-linked references, at the same time as the Leonardo DiCaprio movie Inception continues to generate a whole world full of lucid dreamers.

“It’s always been a point of reference on a surrealist nature that’s always been at the forefront; that sort of expression and tapping into sub-consciousness,” explains singer and bassist Jamie Reynolds. “It’s an area that I guess we still have a strong lineage with. There isn’t a more personal melting pot to dive into. Everything that’s been written about comes from a personal experience or interest that demands to come out in our music – either we’ve got some intuition what’s about to turn up or we’re very good at exercising wish fulfilment,” he says, with a smirk.

“I think James [Righton, keyboardist and vocalist] and I are fairly telepathic when singing, one of us says the wrong word and it completely puts everything off,” concurs guitarist Simon Taylor. “If one makes a mistake, the other makes a mistake immediately – we’re not in charge of that happening. Something in the middle is doing its thing. It’s weird. It’s there.”

With the pavements of electro-pop lined with also-rans and pan-flashers (remember Fischerspooner?) the disappearance of Klaxons or, indeed, re-appearance, has been something heavily noted by many cynics. Had they run out of fizzy-pop juice? Were they too busy getting off with the Geldof sisters? And what of the first attempt at the second album that was allegedly scrapped?

“I’ve been listening to it all week actually,” Reynolds says, leaning forward. “James Ford’s mixing it again. There are about five tracks from that period we’ll release as an EP. I love it. It’s really beautiful, incredible. I think it’s some of our finest work and I think what happened was we jumped forward into a funny period of time. It sounds like the recording of a beautiful dream. Like the oral equivalent of a dream. The subject matter of all of it is very much dream state.”

With a switch musical direction, were they taking influence from any other artists at the time of writing? “We were listening to a lot of the Canterbury scene, which is English 60s, 70s odd psychedelia,” muses Righton. “A guy called Haroumi, who we were all really into. All the Canterbury bands – like Caravan, Soft Machine. There’s a certain atmosphere, a mood as a whole. It really makes sense, this kind of feeling about it. I find it quite cinematic.”

As elegant as they now claim it is, the band decided to keep it on ice, instead going back to what wasn’t broken, denying reports that their label had anything to do with the decision. The pop revolution of the last few years has seen everyone embracing the all-dancing, all-masturbating Lady Gaga and her various wannabes. But no real bands have come forward to knock the Klaxons off their electro wave-riding pedestal. The Hoosiers have a new record out though, apparently.

“There’s a lot more colour around today,” Righton points out. “Bands pushing things, psychedelic things. Like MGMT, you know. I think the last couple of years have definitely been dominated by girl singers – but no, no-one, really.

“I think bands and groups are quite happy to be pop. Pop may have been seen as a dirty word before and I think that, now, everyone’s up for having a go at making a successful pop single.”

While there were doubtlessly more than few eyebrows raised over their choice of producer, there was no denying that Ross Robinson – the producer behind Slipknot, Korn and countless other platinum selling nu-metal acts – knew how to construct something that would shift a few copies. But did anybody tell him he was making a nu-rave record? The guy has probably never held a glow stick, let alone invented a scene around questionable fashion accessories and 80s fluorescent socks.

“He never said that word [nu-rave] once. I don’t think he was aware of it. He doesn’t read Pitchfork or NME. He’s purely creative. He doesn’t sit there talking about music or bands,” Reynolds explains, leaning back. “It was very emotional. With Ross, he was the surrogate father of us all. We moved into his house, it was like a family. There was nothing regimented or military about it. If we wanted to just go and hang out in the valley, we did. Doing the music wasn’t like work, it was like fun.”

“He gives you permission to be yourself. He’s quite big on that,” enthuses Klaxons’ newly appointed full-time member Steffan Halperin, who drummed live with the band during their first album campaign. He pulls off a shirt and tries on another, getting ready for a photo shoot, adding: “You’re not thinking about anything other than what you’re working on and being the best that you can be.”

So it was quite an experience? “Yeah” quips Righton, with one of his smiles. “He gives you confidence in all sorts of areas; it’s like a life training camp. He’s quite keen to remove blockages in your personal life. He says, if there are blockages that are getting in the way of you being a musician, that either needs to be brought to the surface or let go of.” He pauses. “Mostly emotional, girl related problems.”

Indeed, while their surrogate father exorcised the girl-shaped problems, any other structural problems were dealt with through anthropological forces. Namely Shamanism, which references practises regarding the spiritual world, believed to heal the soul.

Taylor explains: “It’s not that there were negative things or problems before, it’s just that that’s such a positive experience that I think it’d make any relationship with anybody more fruitful and developed.”

The shamanic sessions he took part in often involved several dozen strangers all unified by a mystical sense of purpose and emotional cleansing.

“I think it’s natural to go in sceptical, but if you weren’t sceptical you’d have to be pretty headstrong and it probably wouldn’t be something you needed to do anyway. I came out feeling revitalised, happy and ready to start putting the record together.”

So the band unit is better as a consequence? “Well, we’re very much an open group now, I think. There’s nothing going on in our lives that we’re afraid to talk about or to deal with, you know? I think, before, we just didn’t have the mechanics.”

Of course the other band to go stateside and come back rockier were Sheffield’s Arctic Monkeys, who also worked extensively with James Ford. Producing the bulk of their last record with Queens of the Stone Age front man Josh Homme, many fans lost heart from the group’s decision to bin many of the traits that made them great (melodic, kitchen sink dramas turned into gushing indie anthems). Klaxons have thankfully turned up the volume without turning off their personality. A large part of this was bringing Halperin on board full time, turning the band into a four-piece.

“I think the drums are the powerhouse. That’s now what it’s all about. Everything’s based around the powerhouse. If we’re heavier live, it’s because we have the drums,” says Reynolds assuredly. “James [Ford] got what we were going for. We were crossing dance with guitars and he’d already worked with Test Icicles. We just got on with him on a friendship level.”

Righton recalls: “I remember when we met him at the Old Blue [Last]. He actually said he wasn’t that into our music, but he liked hanging out with us. We connected, talked about music – we just got on. And then, when we started making music, it just worked. We did Atlantis on the Hackney Road at Premises.”

And did it shape the band for the better? “We weren’t defined when we met James Ford. We didn’t know what we were doing. There was a decision made, like, come on Stef, let’s make this thing a four-piece and lock ourselves in a room for – what were we there for? – like, a month or something, at The Premises. Then it was like, ‘let’s write some songs and record them’ and it just became really simple.”

It’s quite noticeable, some 20 minutes into the interview that the guys have undergone more than just a line-up change. Sitting nicely on chairs they offer to give up, cartons of orange juice pepper the tables, half nibbled biscuits, an air of decorum and fuck all MDMA anywhere. Most interestingly, a void on all fluorescentries.

“When we first started playing, everyone was wearing black like some sort of awful Bible band and we were, like, what happened to all of the colour and the vibrancy?” Taylor laughs, dryly. “It was just a reaction to everyone wearing black. We thought we’d wear the most ludicrous colour possible.”

Far from being Nathan Barley style scene-queens, Klaxons have a sensitive, self-effacing air of calmness about them. Maybe it was hammered into them by Robinson or perhaps they’ve grown up. Or maybe we’re all dreaming.

“Is this ring a little too much?” Taylor asks, under his breath, pirouetting some garish silver thing between his fingers as he walks out to join the band for the shoot.  There’s a pause. He takes it anyway.

This feature was first published in Issue 07 of FASHION.MUSIC.STYLE, Autumn 2010.