Kate Nash: Her New Best Friend Is You 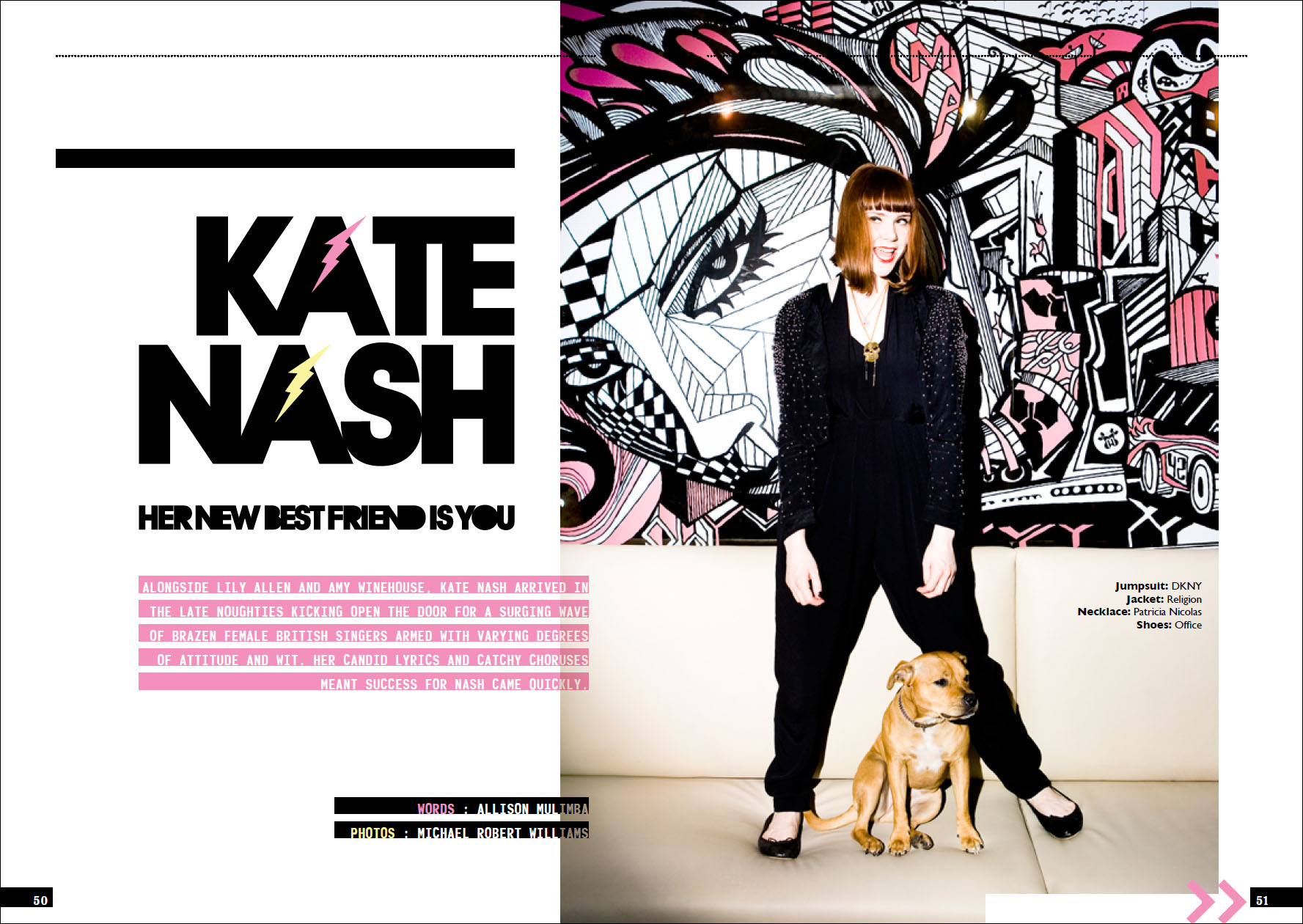 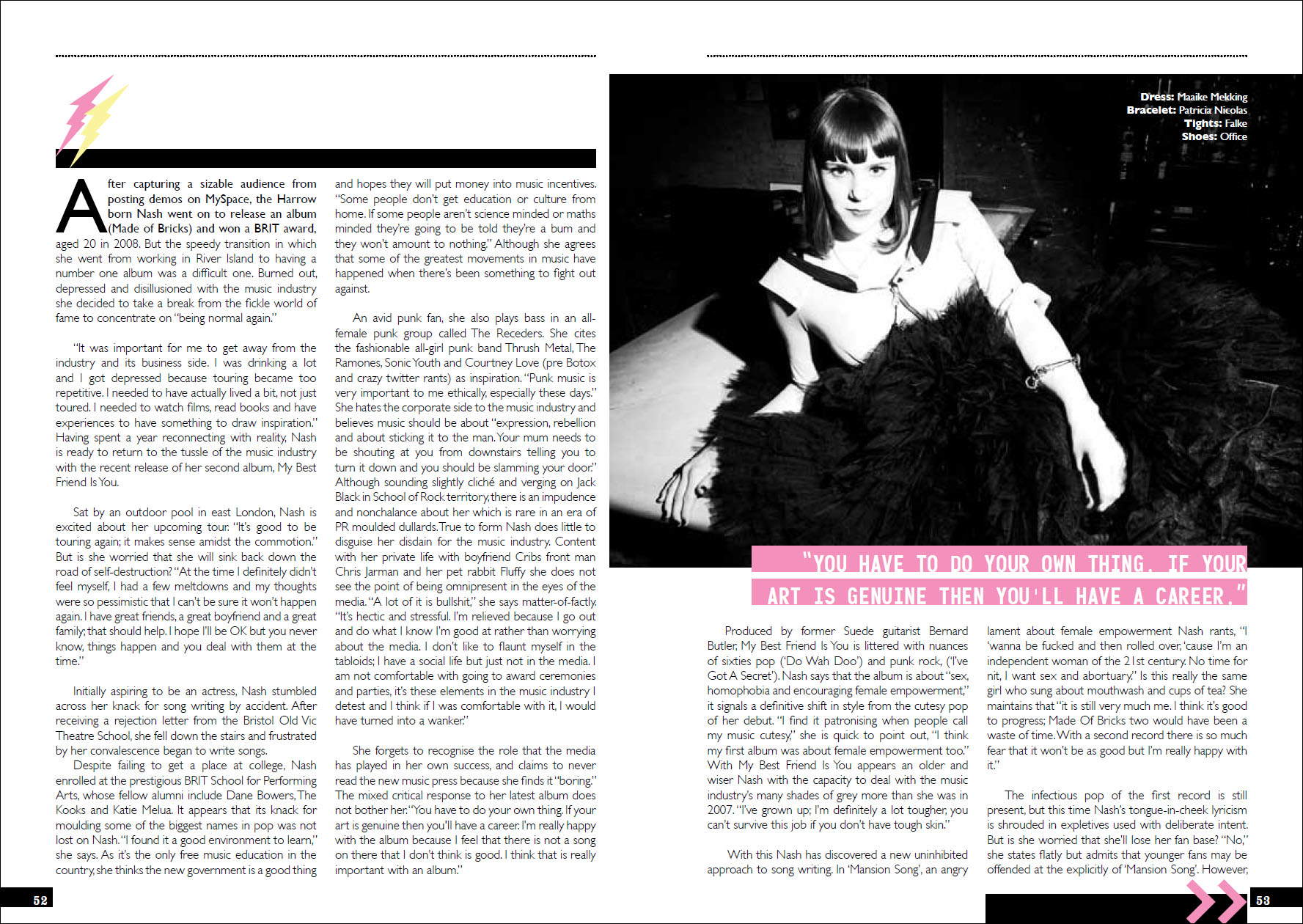 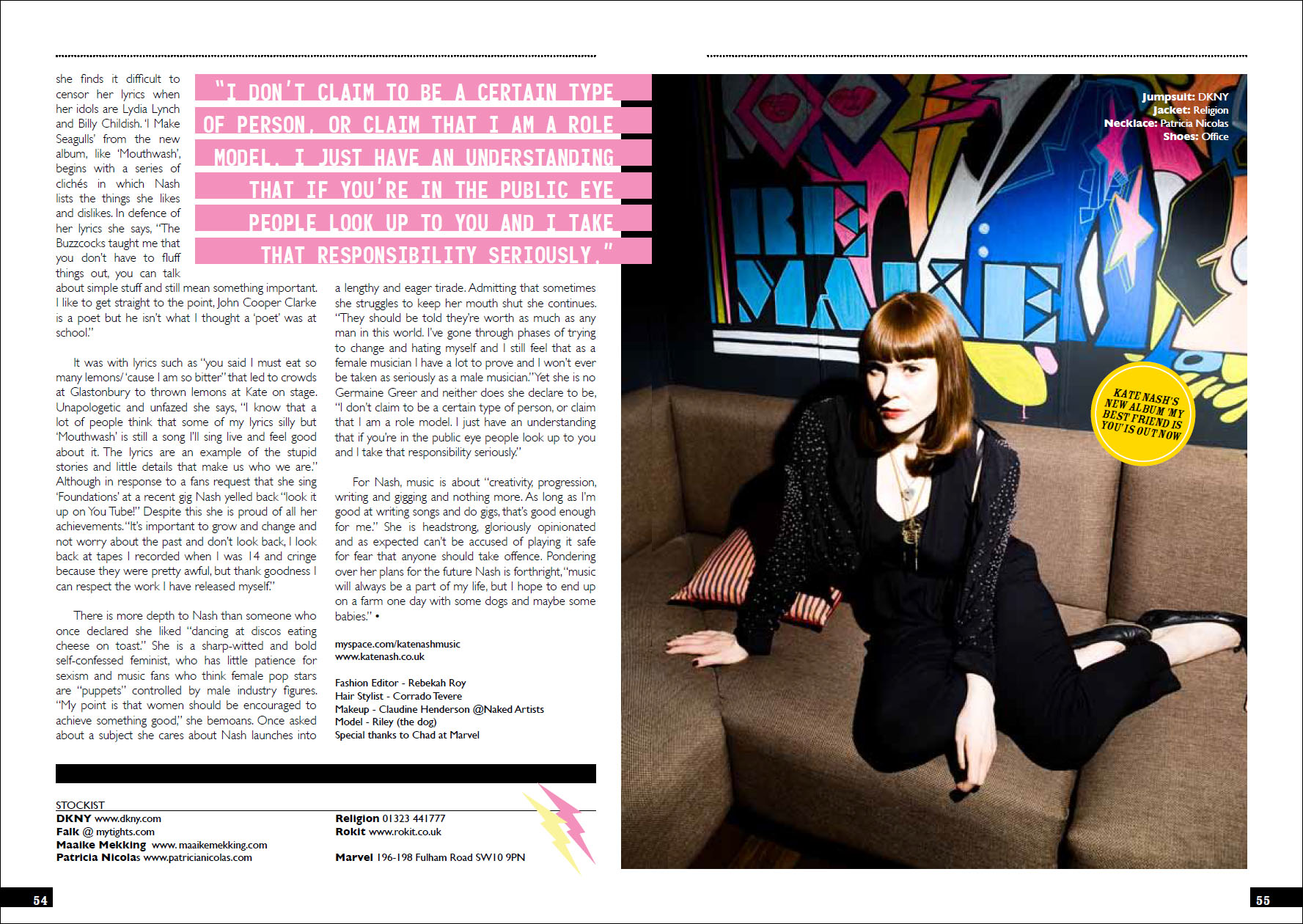 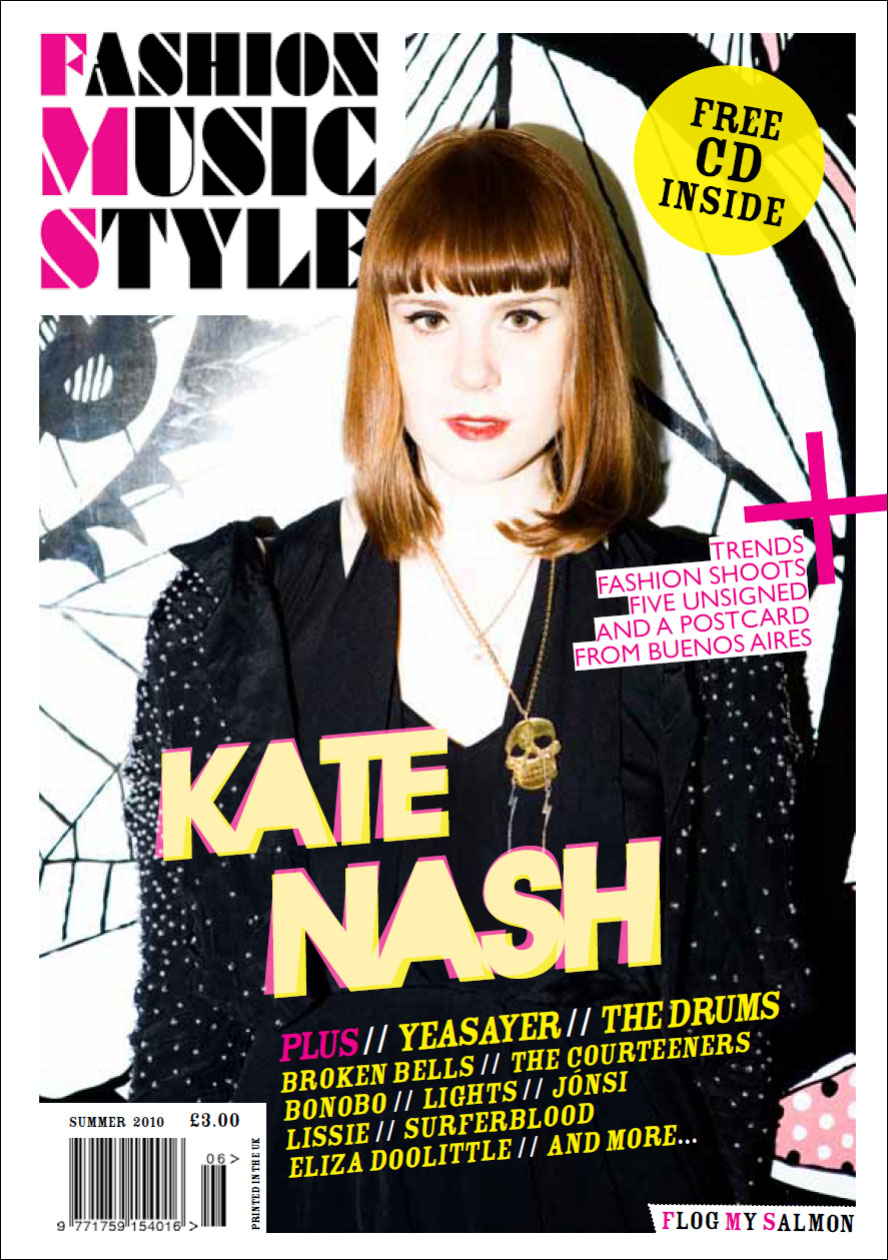 Alongside Lily Allen and Amy Winehouse, Kate Nash arrived in the late noughties kicking open the door for a surging wave of brazen female British singers armed with varying degrees of attitude and wit. Her candid lyrics and catchy choruses meant success for Nash came quickly.

After capturing a sizeable audience from posting demos on MySpace, the Harrow born Nash went on to release an album (Made of Bricks) and won a BRIT award, aged 20 in 2008. But the speedy transition in which she went from working in River Island to having a number one album was a difficult one. Burned out, depressed and disillusioned with the music industry she decided to take a break from the fickle world of fame to concentrate on “being normal again.”

“It was important for me to get away from the industry and its business side. I was drinking a lot and I got depressed because touring became too repetitive. I needed to have actually lived a bit, not just toured. I needed to watch films, read books and have experiences to have something to draw inspiration.” Having spent a year reconnecting with reality, Nash is ready to return to the tussle of the music industry with the recent release of her second album, My Best Friend Is You.

Sat by an outdoor pool in east London, Nash is excited about her upcoming tour. “It’s good to be touring again; it makes sense amidst the commotion.” But is she worried that she will sink back down the road of self-destruction? “At the time I definitely didn’t feel myself, I had a few meltdowns and my thoughts were so pessimistic that I can’t be sure it won’t happen again. I have great friends, a great boyfriend and a great family; that should help. I hope I’ll be OK but you never know, things happen and you deal with them at the time.”

Initially aspiring to be an actress, Nash stumbled across her knack for song writing by accident. After receiving a rejection letter from the Bristol Old Vic Theatre School, she fell down the stairs and frustrated by her convalescence began to write songs. Despite failing to get a place at college, Nash enrolled at the prestigious BRIT School for Performing Arts, whose fellow alumni include Dane Bowers, The Kooks and Katie Melua. It appears that its knack for moulding some of the biggest names in pop was not lost on Nash. “I found it a good environment to learn,” she says.

As it’s the only free music education in the country, she thinks the new government is a good thing and hopes they will put money into music incentives. “Some people don’t get education or culture from home. If some people aren’t science minded or maths minded they’re going to be told they’re a bum and they won’t amount to nothing.” Although she agrees that some of the greatest movements in music have happened when there’s been something to fight out against.

An avid punk fan, she also plays bass in an all-female punk group called The Receders. She cites the fashionable all-girl punk band Thrush Metal, The Ramones, Sonic Youth and Courtney Love (pre Botox and crazy twitter rants) as inspiration. “Punk music is very important to me ethically, especially these days.” She hates the corporate side to the music industry and believes music should be about “expression, rebellion and about sticking it to the man. Your mum needs to be shouting at you from downstairs telling you to turn it down and you should be slamming your door.” Although sounding slightly cliché and verging on Jack Black in School of Rock territory, there is an impudence and nonchalance about her which is rare in an era of PR moulded dullards.

True to form Nash does little to disguise her disdain for the music industry. Content with her private life with boyfriend, Cribs front man Chris Jarman, and her pet rabbit Fluffy she does not see the point of being omnipresent in the eyes of the media. “A lot of it is bullshit,” she says matter-of-factly. “It’s hectic and stressful. I’m relieved because I go out and do what I know I’m good at rather than worrying about the media. I don’t like to flaunt myself in the tabloids; I have a social life but just not in the media. I am not comfortable with going to award ceremonies and parties, it’s these elements in the music industry I detest and I think if I was comfortable with it, I would have turned into a wanker.”

She forgets to recognise the role that the media has played in her own success, and claims to never read the new music press because she finds it “boring.” The mixed critical response to her latest album does not bother her. “You have to do your own thing. If your art is genuine then you’ll have a career. I’m really happy with the album because I feel that there is not a song on there that I don’t think is good. I think that is really important with an album.”

Produced by former Suede guitarist Bernard Butler, My Best Friend Is You is littered with nuances of sixties pop (‘Do Wah Doo’) and punk rock, (‘I’ve Got A Secret’). Nash says that the album is about “sex, homophobia and encouraging female empowerment,” it signals a definitive shift in style from the cutesy pop of her debut. “I find it patronising when people call my music cutesy,” she is quick to point out, “I think my first album was about female empowerment too.” With My Best Friend Is You appears an older and wiser Nash with the capacity to deal with the music industry’s many shades of grey more than she was in 2007. “I’ve grown up; I’m definitely a lot tougher, you can’t survive this job if you don’t have tough skin.”

With this, Nash has discovered a new uninhibited approach to song writing. In ‘Mansion Song’, an angry lament about female empowerment Nash rants, “I ‘wanna be fucked and then rolled over, ‘cause I’m an independent woman of the 21st century. No time for nit, I want sex and abortuary.” Is this really the same girl who sung about mouthwash and cups of tea? She maintains that, “it is still very much me. I think it’s good to progress; Made Of Bricks two would have been a waste of time. With a second record there is so much fear that it won’t be as good but I’m really happy with it.”

The infectious pop of the first record is still present, but this time Nash’s tongue-in-cheek lyricism is shrouded in expletives used with deliberate intent. But is she worried that she’ll lose her fan base? “No,” she states flatly but admits that younger fans may be offended at the explicitly of ‘Mansion Song’. However, she finds it difficult to censor her lyrics when her idols are Lydia Lynch and Billy Childish. ‘I Hate Seagulls’ from the new album, like ‘Mouthwash’, begins with a series of clichés in which Nash lists the things she likes and dislikes. In defence of her lyrics she says, “The Buzzcocks taught me that you don’t have to fluff things out, you can talk about simple stuff and still mean something important. I like to get straight to the point, John Cooper Clarke is a poet but he isn’t what I thought a ‘poet’ was at school.”

It was with lyrics such as “you said I must eat so many lemons/ ‘cause I am so bitter” that led to crowds at Glastonbury to throw lemons at Kate on stage. Unapologetic and unfazed she says, “I know that a lot of people think that some of my lyrics silly but ‘Mouthwash’ is still a song I’ll sing live and feel good about it. The lyrics are an example of the stupid stories and little details that make us who we are.” Although in response to a fans request that she sing ‘Foundations’ at a recent gig Nash yelled back “look it up on You Tube!” Despite this she is proud of all her achievements. “It’s important to grow and change and not worry about the past and don’t look back, I look back at tapes I recorded when I was 14 and cringe because they were pretty awful, but thank goodness I can respect the work I have released myself.”

There is more depth to Nash than someone who once declared she liked “dancing at discos eating cheese on toast.” She is a sharp-witted and bold self-confessed feminist, who has little patience for sexism and music fans who think female pop stars are “puppets” controlled by male industry figures. “My point is that women should be encouraged to achieve something good,” she bemoans. Once asked about a subject she cares about Nash launches into a lengthy and eager tirade. Admitting that sometimes she struggles to keep her mouth shut she continues. “They should be told they’re worth as much as any man in this world. I’ve gone through phases of trying to change and hating myself and I still feel that as a female musician I have a lot to prove and I won’t ever be taken as seriously as a male musician.” Yet she is no Germaine Greer and neither does she declare to be, “I don’t claim to be a certain type of person, or claim that I am a role model. I just have an understanding that if you’re in the public eye people look up to you and I take that responsibility seriously.”

For Nash, music is about “creativity, progression, writing and gigging and nothing more. As long as I’m good at writing songs and do gigs, that’s good enough for me.” She is headstrong, gloriously opinionated and as expected can’t be accused of playing it safe for fear that anyone should take offence. Pondering over her plans for the future Nash is forthright, “music will always be a part of my life, but I hope to end up on a farm one day with some dogs and maybe some babies.”

This feature was first published in Issue 06 of FASHION.MUSIC.STYLE, Summer 2010.