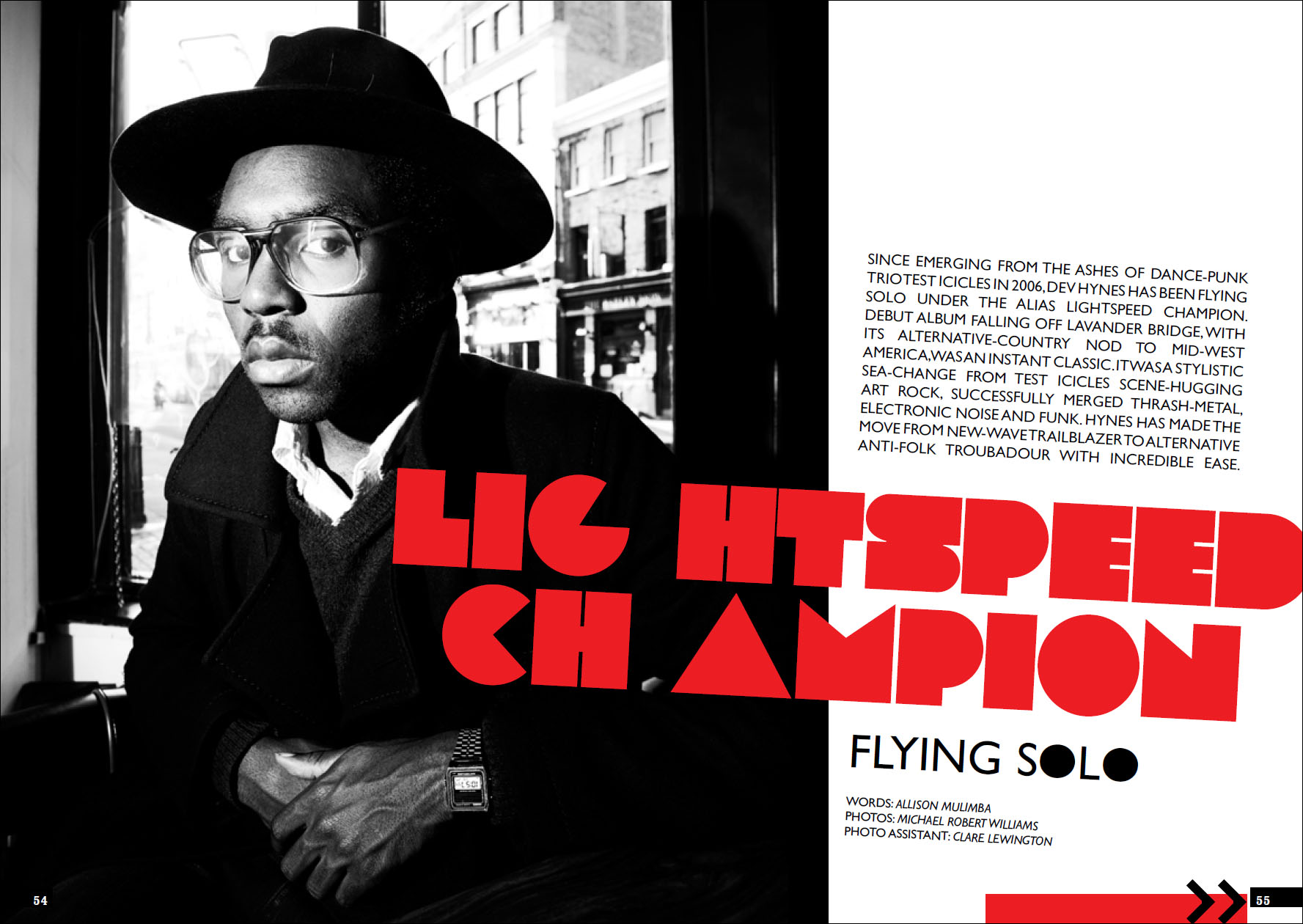 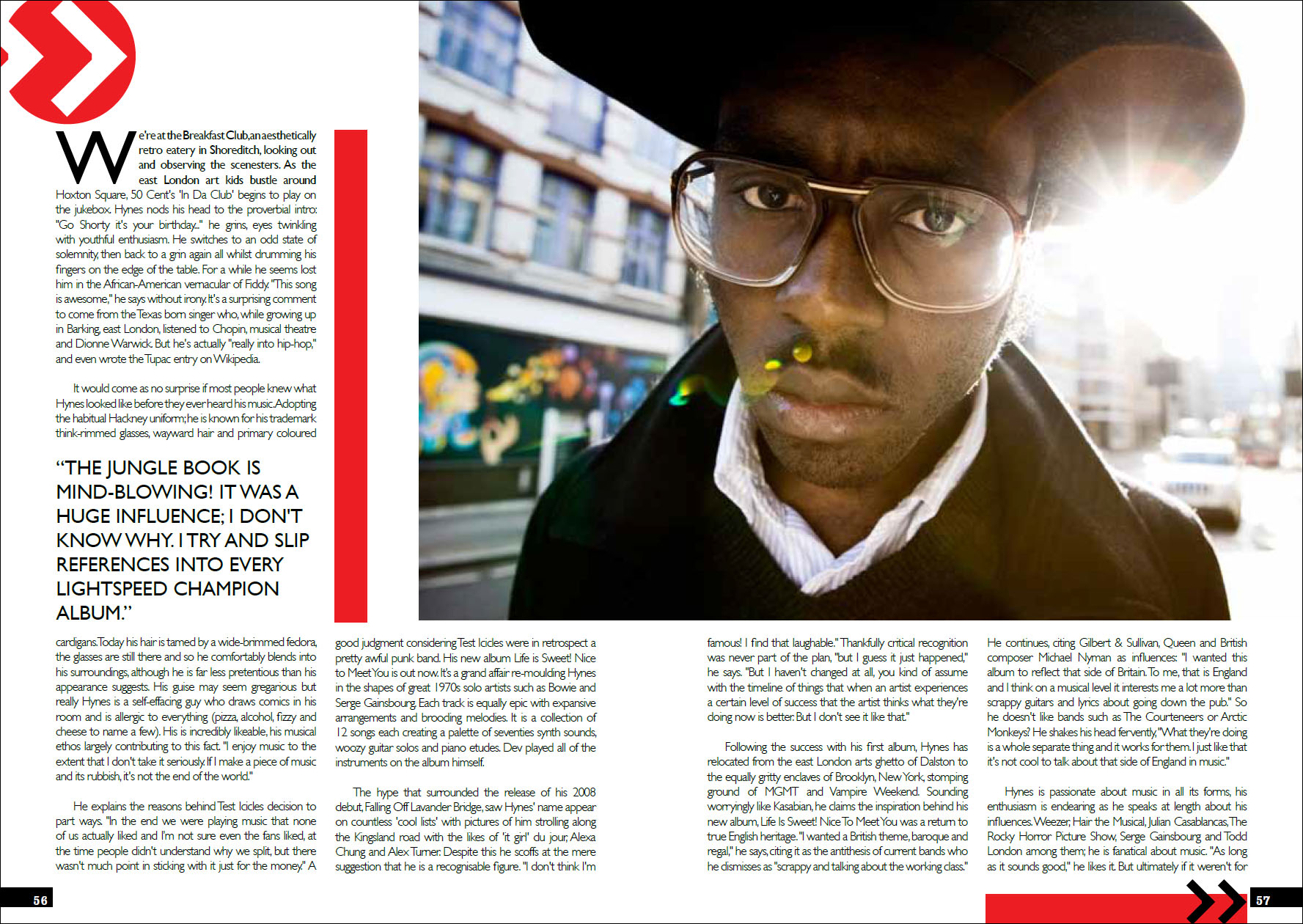 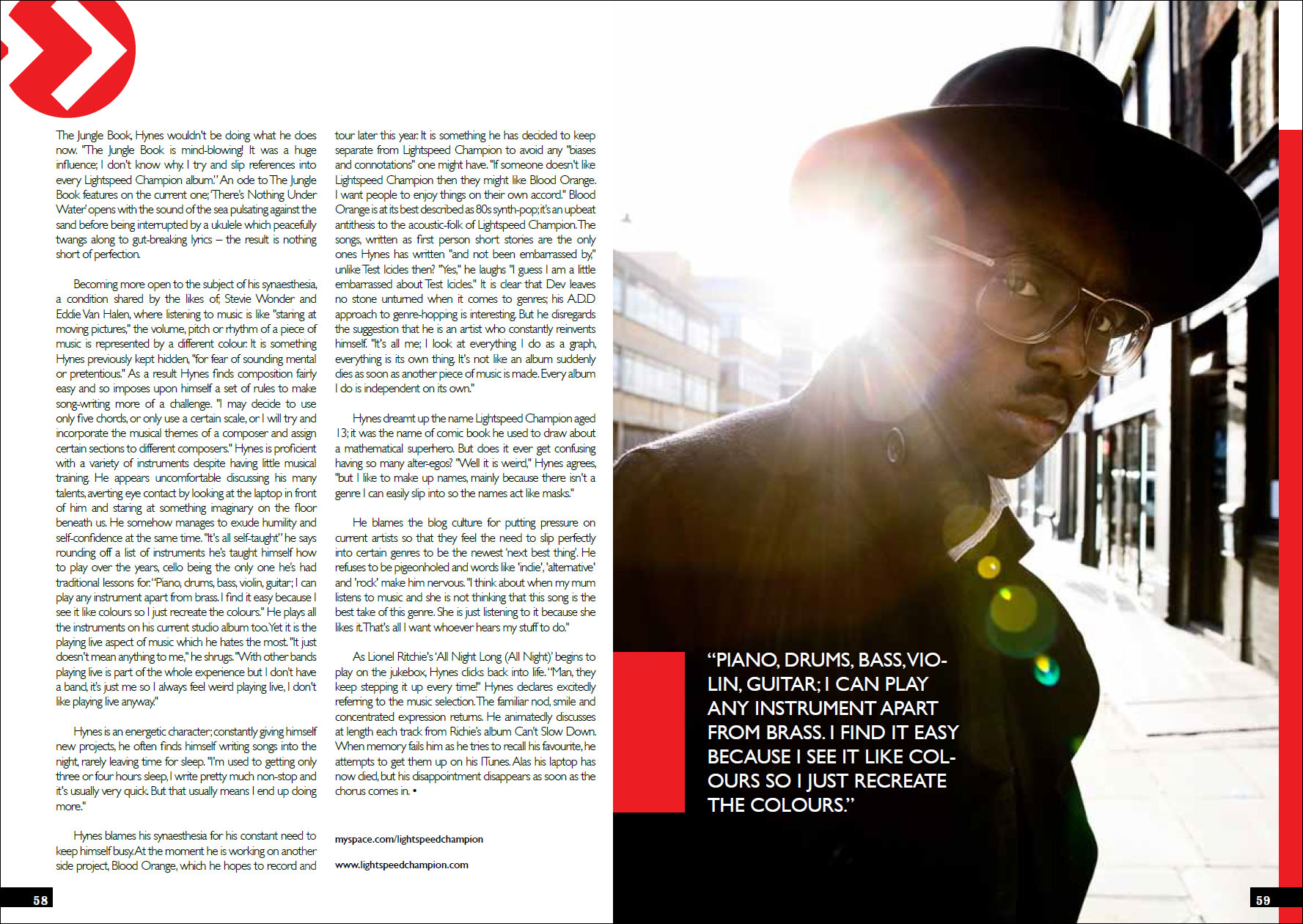 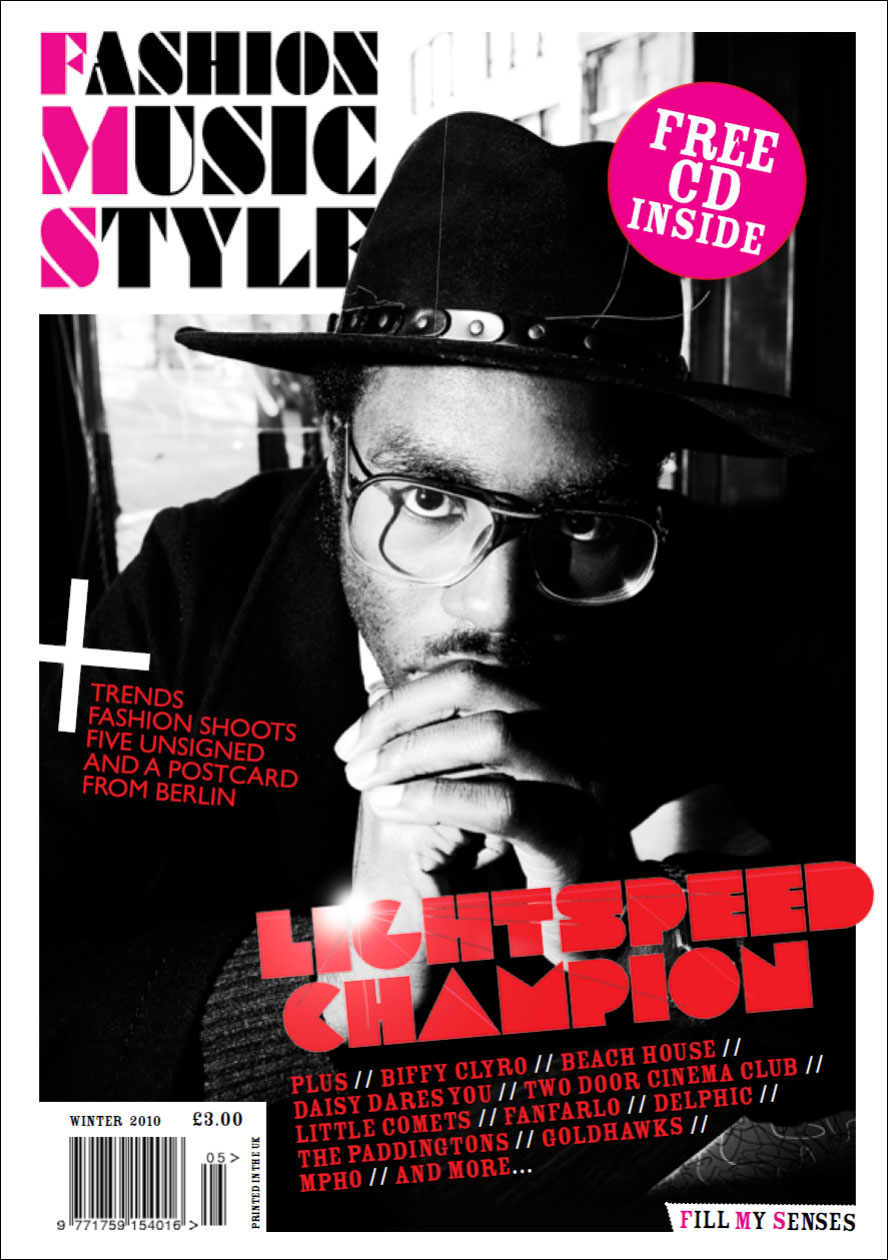 Since emerging from the ashes of dance-punk trio Test Icicles in 2006, Dev Hynes has been flying solo under the alias Lightspeed Champion. Debut album Falling Off Lavender Bridge, with its alternative-country nod to mid-west America, was an instant classic. It was a stylistic sea-change from Test Icicles scene-hugging art rock, successfully merged thrash-metal, electronic noise and funk. Hynes has made the move from new-wave trailblazer to alternative anti-folk troubadour with incredible ease.

We’re at the Breakfast Club, an aesthetically retro eatery in Shoreditch, looking out and observing the scenesters. As the east London art kids bustle around Hoxton Square, 50 Cent‘s ‘In Da Club’ begins to play on the jukebox. Hynes nods his head to the proverbial intro: “Go Shorty, it’s your birthday…” he grins, eyes twinkling with youthful enthusiasm. He switches to an odd state of solemnity, then back to a grin again all whilst drumming his fingers on the edge of the table. For a while he seems lost him in the African-American vernacular of Fiddy. “This song is awesome,” he says without irony. It’s a surprising comment to come from the Texas born singer who, while growing up in Barking, east London, listened to Chopin, musical theatre and Dionne Warwick. But he’s actually “really into hip-hop,” and even wrote the Tupac entry on Wikipedia.

It would come as no surprise if most people knew what Hynes looked like before they ever heard his music. Adopting the habitual Hackney uniform; he is known for his trademark think-rimmed glasses, wayward hair and primary coloured cardigans. Today his hair is tamed by a wide-brimmed fedora, the glasses are still there and so he comfortably blends into his surroundings, although he is far less pretentious than his appearance suggests. His guise may seem gregarious but really Hynes is a self-effacing guy who draws comics in his room and is allergic to everything (pizza, alcohol, fizzy and cheese to name a few). His is incredibly likeable, his musical ethos largely contributing to this fact. “I enjoy music to the extent that I don’t take it seriously. If I make a piece of music and its rubbish, it’s not the end of the world.”

He explains the reasons behind Test Icicles decision to part ways. “In the end we were playing music that none of us actually liked, and I’m not sure even the fans liked, at the time people didn’t understand why we split, but there wasn’t much point in sticking with it just for the money.” A good judgement considering Test Icicles were in retrospect a pretty awful punk band. His new album, Life is Sweet! Nice to Meet You, is out now. It’s a grand affair re-moulding Hynes in the shapes of great 1970s solo artists such as Bowie and Serge Gainsbourg. Each track is equally epic with expansive arrangements and brooding melodies. It is a collection of 12 songs each creating a palette of seventies synth sounds, woozy guitar solos and piano etudes. Dev played all of the instruments on the album himself.

The hype that surrounded the release of his 2008 debut, Falling Off Lavender Bridge, saw Hynes’ name appear on countless ‘cool lists’ with pictures of him strolling along the Kingsland road with the likes of ‘it girl’ du jour, Alexa Chung and Alex Turner. Despite this he scoffs at the mere suggestion that he is a recognisable figure. “I don’t think I’m famous! I find that laughable.” Thankfully critical recognition was never part of the plan, “but I guess it just happened,” he says. “But I haven’t changed at all, you kind of assume with the timeline of things that when an artist experiences a certain level of success that the artist thinks what they’re doing now is better. But I don’t see it like that.”

Following the success with his first album, Hynes has relocated from the east London arts ghetto of Dalston to the equally gritty enclaves of Brooklyn, New York; stomping ground of MGMT and Vampire Weekend. Sounding worryingly like Kasabian, he claims the inspiration behind his new album, Life Is Sweet! Nice To Meet You was a return to true English heritage. “I wanted a British theme, baroque and regal,” he says, citing it as the antithesis of current bands who he dismisses as “scrappy and talking about the working class.” He continues, citing Gilbert & Sullivan, Queen and British composer, Michael Nyman, as influences: “I wanted this album to reflect that side of Britain. To me, that is England and I think on a musical level it interests me a lot more than scrappy guitars and lyrics about going down the pub.” So he doesn’t like bands such as The Courteeners or Arctic Monkeys? He shakes his head fervently, “What they’re doing is a whole separate thing and it works for them. I just like that it’s not cool to talk about that side of England in music.”

Hynes is passionate about music in all its forms, his enthusiasm is endearing as he speaks at length about his influences. Weezer, Hair the musical, Julian Casablancas, The Rocky Horror Picture Show, Serge Gainsbourg and Todd London among them; he is fanatical about music. “As long as it sounds good,” he likes it. But ultimately if it weren’t for The Jungle Book, Hynes wouldn’t be doing what he does now. “The Jungle Book is mind-blowing! It was a huge influence; I don’t know why. I try and slip references into every Lightspeed Champion album.” An ode to The Jungle Book features on the current one; ‘There’s Nothing Under Water’ opens with the sound of the sea pulsating against the sand before being interrupted by a ukulele which peacefully twangs along to gut-breaking lyrics – the result is nothing short of perfection.

Becoming more open to the subject of his synaesthesia, a condition shared by the likes of; Stevie Wonder and Eddie Van Halen, where listening to music is like “staring at moving pictures,” the volume, pitch or rhythm of a piece of music is represented by a different colour. It is something Hynes previously kept hidden, “for fear of sounding mental or pretentious.” As a result Hynes finds composition fairly easy and so imposes upon himself a set of rules to make song-writing more of a challenge. “I may decide to use only five chords, or only use a certain scale, or I will try and incorporate the musical themes of a composer and assign certain sections to different composers.”

Hynes is proficient with a variety of instruments despite having little musical training. He appears uncomfortable discussing his many talents, averting eye contact by looking at the laptop in front of him and staring at something imaginary on the floor beneath us. He somehow manages to exude humility and self-confidence at the same time. “It’s all self-taught” he says rounding off a list of instruments he’s taught himself how to play over the years, cello being the only one he’s had traditional lessons for. “Piano, drums, bass, violin, guitar; I can play any instrument apart from brass. I find it easy because I see it like colours so I just recreate the colours.” He plays all the instruments on his current studio album too. Yet it is the playing live aspect of music which he hates the most. “It just doesn’t mean anything to me,” he shrugs. “With other bands playing live is part of the whole experience but I don’t have a band, it’s just me so I always feel weird playing live, I don’t like playing live anyway.”

Hynes is an energetic character; constantly giving himself new projects, he often finds himself writing songs into the night, rarely leaving time for sleep. “I’m used to getting only three or four hours sleep, I write pretty much non-stop and it’s usually very quick. But that usually means I end up doing more.” Hynes blames his synaesthesia for his constant need to keep himself busy. At the moment he is working on another side project, Blood Orange, which he hopes to record and tour later this year. It is something he has decided to keep separate from Lightspeed Champion to avoid any “biases and connotations” one might have. “If someone doesn’t like Lightspeed Champion then they might like Blood Orange. I want people to enjoy things on their own accord.”

Blood Orange is at its best described as ’80s synth-pop; it’s an upbeat antithesis to the acoustic-folk of Lightspeed Champion. The songs, written as first person short stories are the only ones Hynes has written “and not been embarrassed by,” unlike Test Icicles then? “Yes,” he laughs “I guess I am a little embarrassed about Test Icicles.” It is clear that Dev leaves no stone unturned when it comes to genres; his A.D.D approach to genre-hopping is interesting. But he disregards the suggestion that he is an artist who constantly reinvents himself. “It’s all me; I look at everything I do as a graph, everything is its own thing. It’s not like an album suddenly dies as soon as another piece of music is made. Every album I do is independent on its own.”

Hynes dreamt up the name Lightspeed Champion aged 13; it was the name of a comic book he used to draw about a mathematical superhero. But does it ever get confusing having so many alter-egos? “Well it is weird,” Hynes agrees, “but I like to make up names, mainly because there isn’t a genre I can easily slip into so the names act like masks.” He blames the blog culture for putting pressure on current artists so that they feel the need to slip perfectly into certain genres to be the newest ‘next best thing’. He refuses to be pigeonholed and words like ‘indie’, ‘alternative’ and ‘rock’ make him nervous. “I think about when my mum listens to music and she is not thinking that this song is the best take of this genre. She is just listening to it because she likes it. That’s all I want whoever hears my stuff to do.”

As Lionel Ritchie‘s ‘All Night Long (All Night)’ begins to play on the jukebox, Hynes clicks back into life. “Man, they keep stepping it up every time!” Hynes declares excitedly referring to the music selection. The familiar nod, smile and concentrated expression returns. He animatedly discusses at length each track from Richie’s album Can’t Slow Down. When memory fails him as he tries to recall his favourite, he attempts to get them up on his iTunes. Alas his laptop has now died, but his disappointment disappears as soon as the chorus comes in.

This feature was first published in Issue 05 of FASHION.MUSIC.STYLE, Spring 2010.