Danish post-punks Less Win release their latest album Trust this week; a searing symphony of noise and melody that leaves the listener bemused and enthralled.

Trust is an intense and unforgiving listen at times. The three piece, made up of Casper Morilla (guitar/ vocals), Patrick Kociszewski (bass/vocals) and Matthew Moller (drums), formed in 2011. Since then they have embraced the true ethos of post punk, creating dense sound collages, underlain with melody and rhythm, but this album is also darker and more experimental than anything preceding it.

Eagulls, Metz and Denmark’s own Yuck and Iceage provide a good guide of what to expect. However, the band cite influences as broad as King Tubby, John Coltrane, and Public Image Ltd, so the vast musical scope of the album should not come as a surprise. Powerful bass guitar and drums provide the canvas of the record, onto which guitars, saxophones, piano and strings warp around each other, battling for space in this often breathless album. Sonic norms are rejected, producing stark soundscapes of fuzzing reverb, thundering drums and striking instrumentation.

When the saxophones enter the fray in album standout ‘Bury The Heart’ it feels like you are listening to a contorted version of The Specials. ‘Crucifix’ provides one of the more straightforward moments on the records, a garage rock number, heavy on reverb, fast and unforgiving drumming and punk attitude. There are stadium rock riffs worthy of U2 on ‘Habits’ and psychedelic freak outs on ‘Where You Lay Your Hands’. ‘Haunted Skin’ transitions from stripped down to frantic and riotous at will, whilst album closer “A Thought To Be More” is almost playful, reflecting on failed relationships before finally playing out into a moment of calm as a single saxophone closes out the album.

The howls and growls of vocalists Morilla and Kociszweski complement the music perfectly. Morilla has said “these songs are seared in feelings. There’s a pendulum swinging between ambivalence, distrust, fragility, blame, guilt, disloyalty, misperceived innocence, claustrophobic emotions, and the disorderly inner eruption of all of these”. Trust soundtracks the feelings of the disenchanted and the vocals are both powerful and emotionally charged. From the strained plea to “Peel off my skin until nothing is left” on ‘Haunted Skin’ to purring on ‘Where You Lay Your Hands’, they often act as the conductor pulling the band out of their experimental break downs.

Recorded fully analogue at the Black Tornado Studio in Copenhagen, Trust sees a transition away from the lo-fi DIY ethos of earlier releases, giving the instrumentation more space to breath, without compromising the rawness of those previous recordings. This raw experimentation is part of the bands identity and it spreads beyond their records to their image and videos. ‘Rituals’ video, for example, brings to life the lyrics of the track in a call to challenge society’s norms and the routines that we are all guilty of slipping into.

There was a risk the album could struggle under such unrelenting noise and experimentation, but across the nine tracks there is little room for attentions to drop and whilst the album can be exigent at times, it is a rewarding and captivating listen.

Trust is released 24 June 2016 via the Big Oil Recording Company and is available to pre-order HERE. 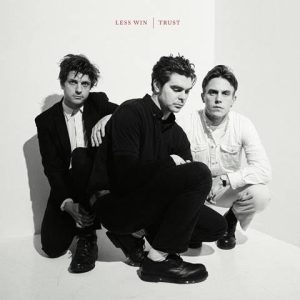