The quintet’s music has the traits of post hardcore, driven by the growling bass work of Andrew Bushnen, but this is accompanied by an intelligence and ambient quality that places the band somewhere between Deftones, Springsteen, Radiohead and Biffy Clyro. The impassioned, raw vocals of David Jakes meanwhile have a crystal quality, both on and off record as shown on ‘Deserter’ and carries the band’s tendency towards melody and soaring riffs on ‘The Blue, The Green’ and ‘Backroads’, without any obvious reach for mainstream acceptance. Lonely the Brave’s music carries real pain and emotional impact and is a shining strength of the band.

Befitting of the music they produce, Jakes placed himself off centre and towards the back of the stage.  Cutting a reserved and withdrawn figure, simply tapping his feet along to the beat, it made the set feel very insular, with only lead guitarist Mark Trotter providing anything in the way of crowd engagement. Jakes even appeared to have a kettle and cup of tea next to him during the set. This is a band full of contrast and intrigue, which came through in abundance during the short set they performed and more than justified their right to hold headlines shows of their own on a similar platform.

The night was opened by Scotland’s Fatherson, whose pop-punk sound has strong mainstream potential. There were also moments of nice vocal inflection and musical warmth from the band, with lyrics rooted in their hometown of Kilmarnock, that proved there is some depth to their work. Their performance was full of energy and enthusiasm and they appear to have all of the traits to build on the fan bases of bands like the headliners, Lower Than Atlantis and Boston Manor. By the time Mallory Knox came to stage, the heavily teenage crowd erupted into a frenzy. Their music is chart friendly mainstream rock, with big choruses and strong riffs central to their appeal.

Whilst this has its place and masses of supporters, it was the musical intelligence of Lonely The Brave that was the standout of the night, with the breakdowns of ‘Dust And Bones’ and varied time signatures of ‘Radar’ marking the band out from its contemporaries. We can only look forward to yet more evolution in their sound, more range and the bigger platforms that will come with this.

Lonely The Brave recently released their Diamond Days EP via Hassle Records, including a cover of The Walkmen’s ‘The Rat’, and it can be streamed HERE. 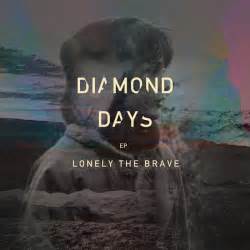