Mellow Gang emerged earlier this year with their debut single ‘Lagoon (Solina)’, a psychedelic pop track that seemed to perfectly balance classic pop and rock of the Sixties with the modern vocal tones of lead singer and guitarist, Harriet Joseph, and the dense and well balanced production of Michael Smith. Whilst Joseph’s husky tenor takes centre place, she is complemented by the lush, melancholic soundscapes of Shen (keys), Nick GK (bass) and Joe Wood (drums).

‘Lagoon’ is now followed by the debut EP from the band, Play. ‘Vendetta’ is a taut record tinged with ideas of love, compromise and sacrifice whilst the dark ‘My Last’ skitters and stutters captivatingly from rich keys work to sparse handclaps. All four tracks on Play are united by their exploration of rich instrumentation and powerful and emotional songwriting. Mellow Gang has largely evolved out of North London’s Venice Trip, with all but Joseph part of that band. Venice Trip shared a similar fascination with psychedelica and 60s R&B but the focus this time around is on a purer pop sound, with fantastic results.

The band have also taken the opportunity to explore certain issues on the record, particularly the complexities of mental health, as Joseph reflects on the impact not just on herself but on those closest to her. The overarching fears of boredom, complacency, imitation, addiction and emptiness pervade the bands work and sees Mellow Gang exploring topics that are often amongst the most difficult to address yet are growingly prominent in modern society

The band have talked of their varied influences, citing the likes of Tame Impala, Beach House, Mac Demarco, Pink Floyd and Roxy Music, and as you listen to the EP you can hear the theatrical tendencies of Roxy Music, Sixties revivalism of Impala and Temples and the minimalist drum work of Demarco’s band. However, as last track ‘Mirrored’ plays out, combining the tight instrumentation of the band (and the closest they come to their former Venice Trip selves) with the powerful and soaring vocals of Joseph, it is clear Mellow Gang are not seeking imitation in their work and have a clear and strong identity and vision for their music.

This rich and at times woozy sound comes as the perfect soundtrack to the long hot evenings which are currently washing over the UK, and Play is set for release on 23 June (pre-order HERE).

Take the opportunity to catch the band live at their EP launch show at The Sebright Arms in London, on 26 June (tickets available HERE). 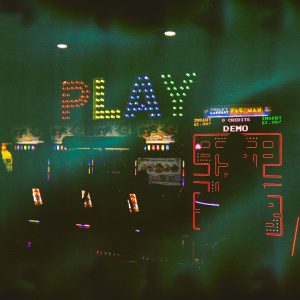