This Christmas could mean something/If I had you near/But you’ll be stumbling round town/I’ve come to the conclusion I’d like you here/Instead of all this messing around… sings MIRI, requesting a mutual ‘leap of faith’, but you can’t help feeling it’s a little halfhearted, as she continues, This Christmas won’t be lonely/If you’re not with me/’Cause I’ll find another like you…

“I wrote this a few years ago and have wanted to release it for ages” say MIRI. “I’d never written a Christmas song before. I decided to record a special live version at mine with my good friends; Chip on guitar and Rosered who mixed, recorded and mastered the track all ready for Christmas.”

‘Tinsel Tree’ is the follow-up to MIRI’s single ‘Under My Skin’ with rapper Cheekie Bugga, but he’s not the only fan of MIRI’s distinctive tones and thoughtful lyrics – film director, Kate Lane, featured three of her songs in the LGBT coming-of-age drama, Fear of Water, including ‘Broken City‘, which MIRI wrote on request for the film, and was her first track to receive radio airplay on BBC London Introducing.

MIRI released her Sound Vibrations EP in 2016 and performs regularly around the UK and Europe, with past performances including 100 Club for The Official Bob Marley Birthday Celebration, Safe Gigs For Women at The Tooting Tram & Social and Bush Hall supporting Laura Veirs. Her European travels have led her to perform in Barcelona, Amsterdam, Bergen, Rotterdam and Berlin – be sure to check out her performance of ‘Part Time Love’ for Sofar Sounds Amsterdam HERE.

‘Tinsel Tree’ is available now via all digital stores, including iTunes HERE. 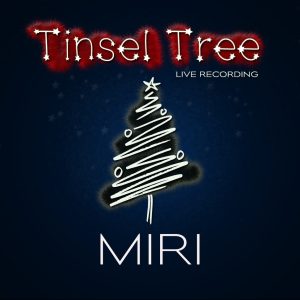