London’s red kite have released a brand new single and video, ‘take care of your own’, a deeply personal and cathartic record which builds expectations for their sophomore album.

The five piece are getting closer to the release of the follow up to 2013’s Song for Crow and ‘take care of your own’ is the first insight into what fans can expect. The track reflects on the moments the band weren’t able to look after one of their own friends who went through a difficult period and despite their best efforts weren’t able to make a difference. It is a sad and poignant record and fits into the wider narrative of the album which addresses the strange nature of relationships with friends, and the life of adults who have spent their whole life trying to make a living as musicians. This promises a deeply personal and reflective record, with ‘take care of your own’ providing an arresting introduction. Musically it is a rich tapestry of swirling guitars, thick basslines, emotive strings and the affecting vocal of Fisher, all driven by the powerful chorus that carries the narrative so clearly.

Lead singer and guitarist, Daniel Fisher, had previously fronted Cooper Temple Clause who split in 2007, and apart from red kite’s debut album, has mostly spent time working in a library and repairing computers. Recording the new album was heavily dependent on funding and time pressures amidst the band members own efforts to make a living. The line-up has evolved since the debut record and now consists of Jim Dare (guitar), Nick Willes (drums), Jo Collis (bass/vocals) and Nicholas Stevenson (guitar), who between them have played in Editors, Minor Victories, Lucky Shivers, Minuteman and An Escape Plan.

The video was made using 1600 different shots filmed on an iPhone over one afternoon in North London and uses the dynamic of the song as inspiration. It uses a slightly terrifying looking toy as the protagonist, fleeing from a situation and emotions he can’t deal with or understand. The strong DIY aesthetic adds a real authenticity to the feeling that this is a band using the recording and artistic process as a form of catharsis.

‘take care of your own’ is available now on Blood Records. red kite are also playing a live date in London in September, which promises further insights into their sophomore record, more details on which are to follow. 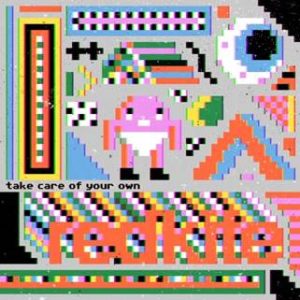