Today sees the release of I Want You To Be Very Happy by Stockholm’s Honeymilk. The duo, aka Marcus Admund and Nikki Nyberg, went from a four piece to a two piece a year ago, releasing first track from the second album, ‘Time Will Kill You’ in the summer of 2016.

The track soon reached 200,000 streams on Spotify, and was followed by ‘The Nothing New’ and ‘Trip,’ which were both instantly hailed as the best tracks the band has released to date.

01- Which colours do you associate visually with the recording & listening to this album?

Nikki: “For me it’s a lot of burgundy and deep blue. Quite dark and sublime colours.”

02 – Which Records / EP / Song or Remixes were on your playlist on repeat, before, during and after the mastering of your second album?

N: “The recording had been going on for quite a long time, so there are loads of songs and records that have been passing by my radar. Lonerism by Tame Impala, Dots & Loops by Stereolab and Alvvays by Alvvays to name just a few.

M: “I listened to a lot of Alvvays and melodic pop. And always Wilco. We have our own playlist, Honeymilk on the road!

03 – Did you have a mood-board with iconic inspo or brand/advertising you were referred to for the art-work or the mood of the album, especially of the album-title?

N: “Not really, when it comes to the artwork we gave our songs to our friend Jonas Rosenblad Holm and he came up with the fantastic artworks for the records. The album-title came from Marcus who heard Donald Trump say it as a douchey remark to Hillary Clinton. Taken outside it’s context, we thought it was a quite emotional and special line.”

04 – Also for the visual communication and the covers of the singles before the second album, I’ve noticed an outstanding graphic design, can you tell us who the artist is, how the collaboration came about, and if there are some mysterious messages in each cover that we’re probably not capable to get at first sight?

N: “His name is Jonas Rosenblad Holm and he’s a friend of ours as well as an amazing artist. I don’t know if there are any hidden messages within the covers, I think Jonas himself’d have to answer this one.”

05 – I Want You To Be Very Happy  is a very beautiful title for a sophomore record. Who is it actually dedicated to from the start? And where do you guys want the message to go places now? Is it dedicated to every potential future listener or…?

06 – I feel a massive vibe coming from The Flaming Lips – especially their Yoshimi’s Record from 2002. Any real association and any possible connection/experience, with their recent, live in Stockholm?

N: “Thank you! Me personally don’t really have a big connection to Flaming Lips other than that I like some of their songs.”

M: “I remember seeing Flaming Lips once in 2008 and Wayne Coyne blew my mind. They also made fun of Håkan Hellström who played right before them at WOW. I loved that.

06 – Memes/Habits: Describe us your daily routine to the studio, and some key-situations, that are reminding you of the ‘process’.

N: We’d usually incorporate a bottle of wine, a couple of retakes and pizza. We’d record in quite a small studio, so quite a lot of close bodily contact with each other aswell.

I Want You To Be Very Happy is out now via Birds Records/Phonofile. 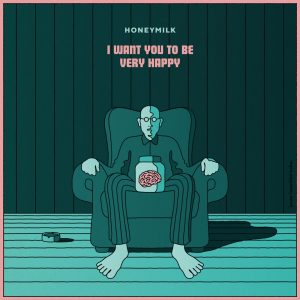