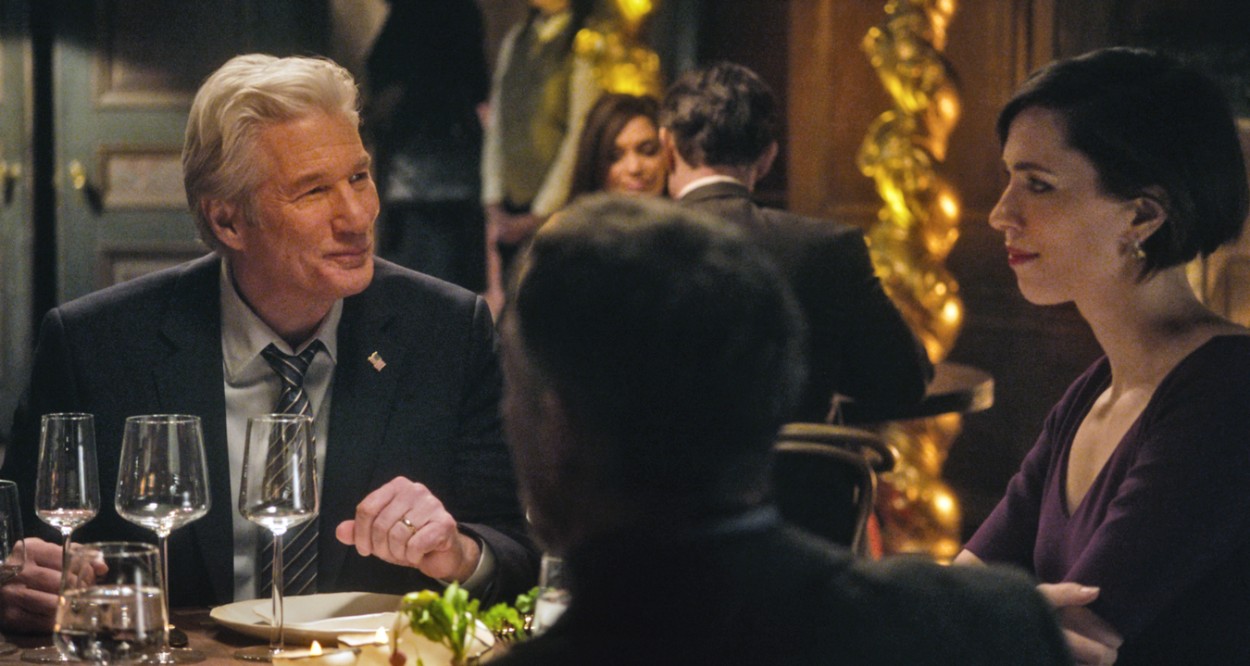 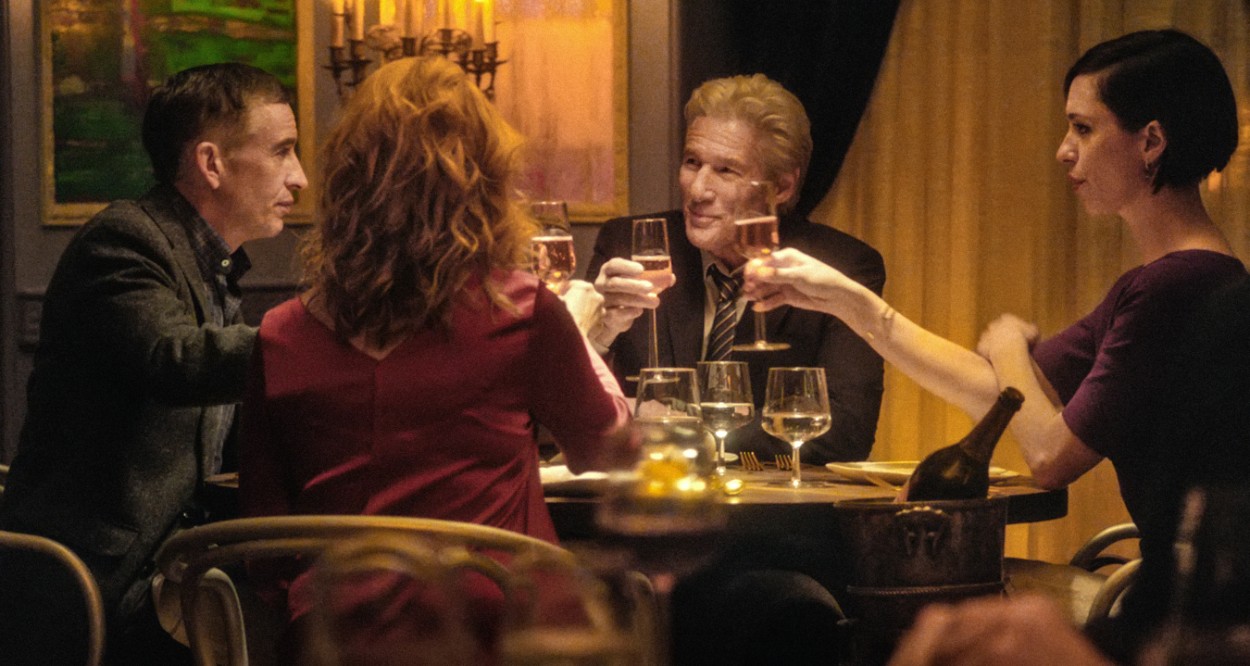 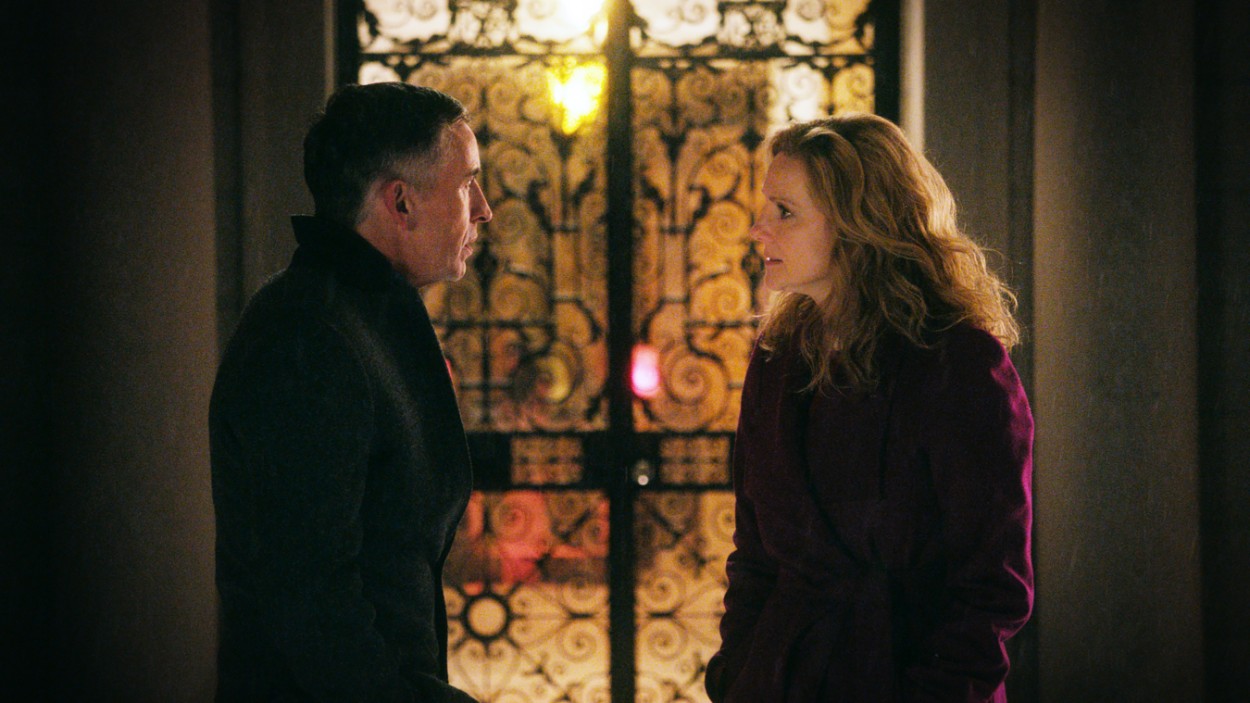 Presented over one evening at an exclusive restaurant, the kind that regular (desperate) folk have to book three months in advance, the story unravels course by course… as do the characters, brought together for an urgent family meeting, in the hope that they can come to a mutual agreement on how to deal with a recent tragedy that could affect the lives of each and every one of them, and more to the point, those they love.

Stan Lohman (Richard Gere), a popular congressman running for governor, gets a spontaneous booking for the restaurant, with its overbearing maître d’ (Michael Chernus) – who over explains every dish to the point of claiming he knows the name of the cow who produced the dairy. His estranged brother, Paul (Steve Coogan), is the reluctant guest, encouraged to attend by his seemingly charming and supportive wife, Claire (Laura Linney).

Rebecca Hall plays Stan’s new wife, Katelyn, the seemingly hard done by, try hard successor to Barbara – the first Mrs Lohman played by Chloë Sevigny – who we come to know through the sporadic flashbacks that piece the characters together, and reveal the abhorrent crime committed by the sons of both couples.

Paul Lohman is rarely given a voice by his family and in-laws, at least not one that is respected. Coogan’s character is the type often described as a ‘loose cannon’, simply because they’re direct with their opinions and their emotions. Apparently Paul has inherited some kind of mental illness, yet we soon come to learn that his dear wife is both controlling and deceitful, using this against him and leaving him in the dark while she colludes with their son to keep his ‘accident’ under wraps – ultimately, both mother and son disrespecting him in the process.

Meanwhile, Stan is considered, “elitist, self-serving… just like mother raised him,” by Paul, but as the story unfolds we see that Stan – who annoyingly has his assistant, Kamryn (Taylor Rae Almonte), hovering around the building all evening and updating him on the vote for his new bill on mental health provision – is willing to sacrifice his own goals to see that justice prevails and that their sons are forced to face the consequences of their actions – placing the moral good above all.

While the structure seems scattered and the ending abrupt, inconclusive (and slightly bizarre), The Dinner does manage to burrow beneath the surfaces of relationships, revealing that people are not always what they seem, or how others have presented them; and that all it takes is a threat to who they love and/or what they believe in to bring out the darkest or brightest sides of their character.

The Dinner is in cinemas now.