You might not have heard this name before, but you will probably hear it way more from now on…

Becky & The Birds is the moniker of Thea Gustafsson, the 21-year-old from Örebro who writes, produces and sings all of her own music. Her talent was forged at the prestigious Songwriters Academy of Sweden, Musikmakarna, which also kick-started the careers of LÉON and Skott, to name a few.

Here we see B&TB, debuting with fresh and dreamy first single ‘Holding On, although Gustafsson has already clocked up millions of streams as a top line vocalist in high profile collaborations. However, these relentless sessions with all-male producers began to grate on her. “I always had this voice inside me – society’s voice – that was like ‘No, you can’t, ‘cos you’re a girl, that’s for the boys’,'” she explains.

Digging among her various music’s influences, such as trip-hop and ‘90s R&B alongside beautiful samples plucked from nature, “Holding On” was born and we’re excited to reveal some secrets behind its creation, with an exclusive Q&A from Mars.

01 – Which colours do you associate visually with the recording & listening of this song?

“Funny you ask. I actually see colours when I write and produce music. And even though every song has its own colours, I would say that I’ve been very inspired by blue, yellow, pink and red while making the EP. This song though is blue and red.”

02 – Which Records/EP/Songs or Remixes were on your playlist on repeat, before, during and after the mastering of ‘Holding On’?

“Eva Cassidy will always be my number one go to. But I remember also listening a lot to Tyler The Creator’s Flower Boy. It’s a masterpiece in my opinion. And of course, Frank Ocean’s Blonde.”

03 – How much do Fashion and Trends influence your outfit on stage, and your stage-persona overall?

“I’m more inspired by people on Instagram and other social medias, but I have no idea about what’s really in and out in the ‘fashion world’. And I really couldn’t care less. I just wanna be comfortable while looking cool af, and I’m happy with my current self.”

04 – Memes /Habits: Please describe to us, your daily routine in the studio, and some key-situations, or Fun-XD-Situations that are reminding you of the ‘process’: writing-recording-publishing for the single?

“I’m a very visual person. So I actually had one screen with different movies and pictures that I like next to me when I wrote this track. That always gets me into the right mood. That, and some wine. Haha. And I also love scented candles, so I had one that smells like flowers and champagne. It’s amazing. But other from that, my days in the studio looks very different from one another, since I often have a different process for a different song.”

05 – Tove Lo retweeted and promoted your song after release… WOW! What was your first feeling about that? Would you like to do the same, if one day could you be of Tove Lo’s status, and why?

“I love Tove. It was such a beautiful thing of her to promote me, which I’m so thankful for. I mean, I could only imagine that she has like a thousands of people asking her every day to do this and that, and promote this new band or write something about this new artist. So for her to do this was an amazing feeling for me. I hope to one day be able to help a new upcoming artist in the same way that she helped me with this one. It’s such a nice and generous thing and really shows what kind of amazing person she is.”

06 – What does it means for you – Equality – In this particular moment, for the music industry? What would you like to suggest to new up & coming artists that perhaps struggle to find their own way with their music?

“Equality is something that I think a lot about, probably because I’m a woman in this business. But I think what we saw with ‘Me Too’ was something amazing, and truly beautiful. FINALLY women could come forth and tell their stories about these fucking pigs that are in this business. We need to get rid of them, at least make them scared and sorry as fuck, they are hurting the industry. So that’s what I’m trying to do. Simply by not listening and obeying to their disgusting commands. I will do my own thing in the way that I want it, whatever any man in costume may tell me along the way. And that’s how I think all new artists should do too. It’s a new era now. I’m excited.

‘Holding On’ is out now. 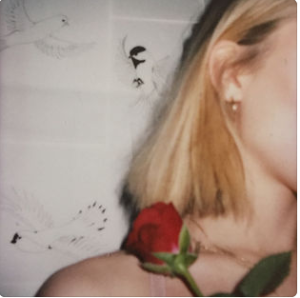