Beans on Toast releases his new album, A Spanner In The Works, later this year; a politically charged and socially aware statement that lives up to its title with its abandonment of guitars and interesting forays into electronica.

A Spanner In The Works will mark Beans on Toast, a.k.a. Jay McAllister’s, eighth studio album to be released annually, on his birthday. His longstanding DIY ethos remains at the forefront of the sound and aesthetics of the album, with the entire record created on a laptop round a friend’s house. However, almost all tracks leave the folksy three chord guitar work of prior records behind to embrace beats, loops, synths and samples that make clear why this progressive record has the title it does.

Album opener, and lead single, ‘2016’ is classic Beans, a musical record of the passing year and ode to the mood of the country in what has been a tumultuous year for so many reasons. ‘2016’ is also an indication of what is to come across the rest of the record lyrically, but sonically it is something of a comfortable outlier.

As Beans explains, he, “had the urge to do something a little different when recording [the album]. The idea of doing it without guitars seemed like a suitable spanner. The sounds and rhythms you can make on a computer are absolutely endless and we had a lot of fun exploring that world, as it’s interesting to see how many twisting paths a song can go down after it’s been written.”

Testament to this, ‘I Can Be That Tree’ is punctuated with synths as it recollects Beans and his wife’s time together, as they marked their first wedding anniversary by planting a tree in a public park. ‘The Drum Kit’ is almost carnivelesque as Beans addresses the closure of live music venues across the country, the same venues he has built his following in over the past decade, alongside long-time friends and collaborators such as Frank Turner and Ben Lovett. It is this everyman lyricism that makes Beans such a valuable contributor to modern pop culture. As so many others go for the dramatic and extravagant, Spanner in the Works is rooted in everyday life, whether that is time in the pub, holidays at Butlins or family relations.

The record is not limited to threadbare drums fills, as there are piano loops, brass sections and organs on display. Album closer, ‘Fast Train’, even features some waltz as McAlister looks at the impact of gentrification. It may seem easy to write off gentrification as destroying creative communities and there are undeniable success stories to be heard from gentrification. However, Beans writes with such honesty and authenticity that helps to drive home his message and make the listener think.

There are also some interesting features across the course of the record. Vocalist, Alex Mills (Tricky, Wretch 32), adds sixties inspired harmonies to ‘We Made It To The Waterfall’, and Matt Millership from Tensheds provides keys on a number of tracks, including ‘Down The Pub’ and ‘Nanny Mac’, an endearing tale of Beans’ life in the old East End with his Nan. Beans mum, Pauline, even appears on ‘Fear Mongering Clap Trap’ as she helps her son consider the growing threat of global warming, and showing where Beans’ socially conscious outlook may have come from.

The whole record was recorded over a weekend with long-time collaborator, Scampi Dan, and it is a unique take on Beans’ traditional approach. Whilst folksy and counter culture in spirit (particularly on the brilliantly sceptical ‘Money For War’), it feels equally modern and relevant given its lyrical content. The beats and tracks can at times seem a little lightweight and throwaway but Beans on Toast’s reputation is rightly forged on his lyrics and storytelling, and this is in great shape throughout the record.

A Spanner In The Works will be released on Xtra Mile Recordings on 1st December this year. Beans is also going on tour in support of the record, on his now annual winter tour. Despite the electronic stylings of the album, the live show promises to retain the usual guitar, banjo and harmonica set up for any long-time supporters. 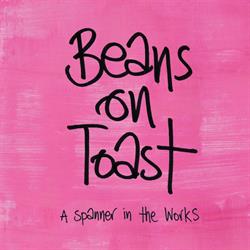