On Tour: Cage The Elephant Return to UK with First Headline Shows in Almost Five Years

No doubt the tour will feature performances of the band’s more established tracks, including breakout ‘Ain’t No Rest For the Wicked’ and the riotous ‘Always Something’, as well as tracks from their latest album, Tell Me I’m Pretty. Their fourth LP was produced by The Black Keys’ Dan Auerbach and released in December last year to universal acclaim. It fused their blues and alternative rock stomp with a more developed and deft songwriting performance. In particular, the magnificent ‘Sweetie Little Jean’ is a Beatles–esque narrative, whilst ‘Mess Around’ has all the power and catchiness of their previous work, with a Black Keys groove stamped across it. Lead singer, Matt Shultz even directed the Western-inspired video for single ‘Trouble’, with its breezy melodies and undertones of despair.

The release was supported by a short run of UK and European festival appearances throughout the summer, including special guest slots with Red Hot Chilli Peppers and Biffy Clyro. The band have also continued to raise their profile with performances across US TV included The Late Late Show with James Corden and The Tonight Show Starring Jimmy Fallon. This fantastic record and scintillating live show will now be brought to some of the most famous venues across Europe.

Take the opportunity to catch the irrepressible live show of Cage the Elephant with tickets on sale now and available HERE. Support in the UK and Ireland will be provided by Declan McKenna, as well as Spring King for dates in Manchester and London. 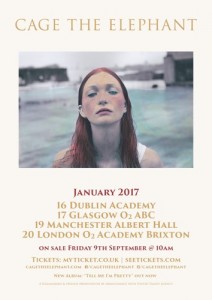