Belgian three-piece, BRUTUS, release their debut album, Burst, later this month; a dark, heavy and atmospheric record which straddles post punk, rock and hardcore and provides an impressive introduction to the band.

Fronted by lead singer and drummer, Stefanie Mannaerts, the group draw immediate comparison with Marmozets and with their mix of melody and power this is understandable. However, as Burst progresses, it become clear that BRUTUS are driven by their own ideas and identity. The drums are high and prominent in the mix and there is fusion of power metal pummelling and math rock intricacies, ably supported by growling bass work and post hardcore influenced guitars of Peter Mulders and Stijn Vanhoegaerden.

Opening track ‘March’ is largely instrumental and moves through time signatures and musical motifs with a nod to the principles of prog rock, but loaded with raw propulsive energy. This energy rarely lets up as the record moves straight into lead single ‘All Along’. These opening tracks set the tone for an emotionally loaded and anxiety riddled record, typified by he imploring refrain of ‘Bird’ and embittered lyrics of ‘Not Caring’.

At times Burst is a little rough and rugged, the vocals strained, the drumming single-minded, but that is almost part of aesthetic, as Mannaerts explains she ‘had to dig deep into hidden and guarded emotions’ in making this record. The result is, “a ball of emotions ready to burst with frustration and anger. But also with tons of energy, love, everything at once.”

Whilst much of the record is driven by high tempos and thunderous instrumentation, the group show versatility in influence and style throughout. BRUTUS revel in their differences and embrace the range of influences from which they have come, united by a background playing Refused covers. This diversity is undeniably to the strength of the band, and evident throughout their work, as their debut plays out as a blistering introduction to a band challenging the norms of post hardcore and experimenting freely.

Burst was recorded in Vancouver with Jesse Gander (Japandroids, White Lung) and is due for release in the UK on 24 February via Hassle Records.

BRUTUS tour the UK and Europe over the next few months, dates below. 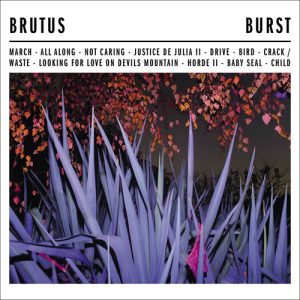