“’Do It Alone’ is about refusing to be the other woman and sticking to girl code,” says Howl, “so I love the girl power vibes of this video. It was so fun to make – Me and two of my friends were just running around our favourite London spots, causing trouble in front of the general public.”

Howl wrote ‘Do It Alone’ after she could see things were getting closer between her and a man who was taken, “as an ode to all the reasons why I would never ever take that role, even if I wanted to.”

Snapped up by Columbia Records, shortly after leaving school, Howl spent the following three years writing and recording songs, doing studio time with the likes of Justin Parker, Joel Pott, Samuel Preston, EG White. Much anticipation for the young artist also brewed during this time; in 2014, Howl was nominated for BBC’s ‘Sound of’ poll alongside Sam Smith, FKA Twigs and Ella Eyra, and ‘Critics’ Choice’ at BRIT Awards.

Chlöe Howl returned to the live music scene with a sold out headline show at The Waiting Room, in London, last month (her first show in two years) and is now in the studio working on new material. 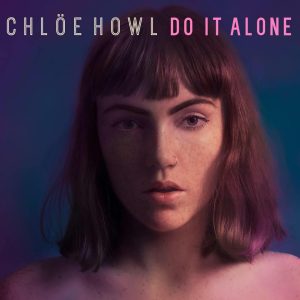