In the first of our new Creative London series we meet Patrick Drake, the Head Chef and Co-Founder of HelloFresh, the UK’s biggest recipe box service. He’s also a presenter on Discovery Channel, National Geographic and Fox, and the creator of the world’s fastest online cooking course, The 60 Second Chef.

Read up on how he went from working in law to becoming a super-fast chef, and how he was inspired by Tom Hanks in that classic movie, Big, to live in a Shoreditch loft. But does he have a trampoline?! We find out…

What brought you to London and how long have you been here?

I was lured to the bright lights of London after I finished Oxford Law School and decided (for my sins) to become a lawyer. I had a couple of stints living abroad in Thailand and Japan but I’ve been here for around 15 years now (where did that time go?!) and in East London for five years. First I was living in a photography studio that used to belong to Nick Knight, then I moved to a beautiful open plan loft in Shoreditch.

It’s just feels so alive. You walk out the door into a constantly evolving gallery of street art, frequented by the most eclectic, creative people you’ll ever see. There’s just a constant undercurrent that people are doing exciting, creative things from tech to art to fashion and food. It’s obvious to say that we are affected by our environment, but in the same way that a great kitchen can inspire you to cook, a great neighbourhood is equally stimulating. But let’s get down to brass tacks: when I was about eight years old I saw Tom Hanks in a movie called Big. He moved into a Manhattan loft apartment and from that moment I set my mind on having the same vibe for my own home. Shoreditch ticks that box. East London has definitely played a part in my outlook. The feeling of energy and constant change pushes me to create and achieve more.

We love Big! Do you have a trampoline?

I don’t have a trampoline yet – I’m not sure I have the ceiling clearance for one!

What was your childhood dream, and does it relate to what you do now?

Ha, my dream was to be an astronaut. It never happened but (here comes a cliché) I never got my head out of the clouds. I always had a very big vision of my own future. Some would say that sounds grandiose, but frankly I couldn’t care less. Everything great in life starts with a dream. The difference between delusional grandiosity and success is in the execution of that dream.

After leaving university I remember quite specifically thinking, “I’ll be damned if my friends are going to earn more money than me.” So with that wonderful motivation (!) in mind I joined a firm called Clifford Chance. The novelty wore off after the first couple of months of paper shuffling and I started to plan my escape route. I’d always loved cooking, but more specifically, I’d always loved teaching other people to cook. So I (totally logically) decided I wanted to have a cooking show. I wrote out what I wanted at the top of a piece of paper and underneath I wrote the steps I thought I’d need to take to get there. And then I got to work. Cooking in secret during my lunchtimes in the law firm’s fine dining kitchen, cooking in high-end London restaurants by night. It all came to a head one day when I walked out of the kitchen in a restaurant wearing my chef’s whites and a group of people from my law firm walked in. I was busted. With that I decided to tell my senior partner I was quitting to be a TV chef. He thought I’d totally lost the plot and the rest is history. There’s nothing quite like somebody doubting you to provide the motivation to succeed!

What are you working on right now?

I’m working on two big projects right now: the launch of my video cooking course The 60 Second Chef and my new website The 60 Second Life. The online course teaches students everything they need to know about cooking in 60 second videos, whilst the website is all about breaking down the world of wellness and self-improvement to make it easier to realise your potential.

What’s a typical day for you?

There are no typical days! The regular parts of my day are 6am yoga and a huge, nutritious breakfast (or two breakfasts if I have time). That combo gets me set up for the day. After that I could be shooting a new video for my vlog, designing the new fit-out for our next office move (I’m planning for it to be a cross between Soho Farmhouse and an industrial Shoreditch coffee shop), touching base with my publicist, giving talks to organisations like The Prince’s Trust, creating new recipes… the list goes on. I get to choose exactly what I do every day and I only do what I love. Some might say that’s lucky, but it’s taken years of hard work to be this lucky.

I’m also borderline obsessed with Shoreditch House. Sometimes I think I spend more time there than I do in my house. I love Redchurch Street for all it’s cool boutiques and coffee shops and when it comes to food you have to try the pizza at Story on Bethnal Green Road. The minimal interior is as beautiful as the food.

A beautiful Japanese Chef’s knife and my Panasonic GH4 camera. They go pretty much everywhere with me.

Link us to something that you’ve created…

It’s easy for people who’ve achieved success to list out all the cool things they’ve done. But it’s more useful to hear about how they got there. I recently did a vlog about scrapping New Year’s Resolution’s in favour of a New Year’s Action Plan. It’s basically the approach I used when I wanted to get out of law and I didn’t wait until January 1st to write it. And neither does anyone else.

What have been the highlights of your career so far?

Landing a TV show that aired in 67 countries, being a co-founder of one of the most successful start-ups in the world and above all else launching my online cooking course (the greatest test of self-motivation I’ve ever faced in my life). And to that last point… check this out.

Jamie Oliver of course. The guy genuinely lives by what he says. He cares about what people eat and he tirelessly campaigns in the face of adversity to improve lives through good food. If you haven’t seen it yet then you have to check out his TED talk. So powerful.

What does the future hold for you?

Ah the big question! My greatest passion is teaching people and I want to build my site the60secondlife.com into a hub where people can easily learn everything they need to realise their potential. I’ve made some dramatic changes in my own life but I know now that there was no magic to it. You create your own luck; you stack the odds in your favour. There is a system. To help people see that and put them on the path to their own dreams would be the greatest legacy I could create.

Top tips for eating a little cleaner this new year?

My greatest personal challenge is erratic blood sugar levels (the kind that leave you elated immediately after eating, but desperate for a sugar-loaded snack mid-afternoon). This year I’m focussing on cutting out stimulants and replacing them with nutrient-dense, slow-burning foods. The simplest thing you could do this year is cut out refined sugar and coffee (or at least reduce to one cup). Is it going to be easy? No, not at first. But things that can change your life need a bit of effort. Taking these two elements out of my diet has made a huge difference to my energy levels, complexion, weight and wellbeing.

People on a budget and limited time – how would you conquer this?

Where budget is concerned it’s worth taking a step back and doing the maths. I’m not going to get all preachy about it, but we all have that tendency to buy certain things without a second thought (cigarettes and alcohol are right up there), but when it comes to food we start pinching the pennies. But there literally couldn’t be anything more important to your health and happiness, so cut back in the areas that don’t serve you and put more budget into great food. And as for limited time…that’s why I created the world’s fastest cooking course the60secondchef.com! 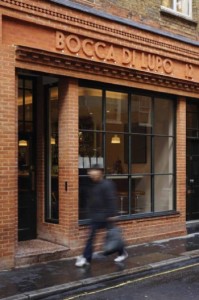 To Eat: I go nuts for Italian food so it’s all about Bocca di Lupo in Soho for me. Head over the road for gelato at Gelupo after.

To Drink: Tonteria on Sloane Square. Best frozen margarita this side of Tulum.

To Party: Ramusake in South Kensington.

To Shop: Kit and Ace on Redchurch Street.