Forest Gate’s Ben Drew, or as he is better known, Plan B, returned last week with his first album in six years, Heaven Before All Hell Breaks Loose. His fourth album introduces yet another phase of his career metamorphosis with a swing towards big choruses and crisp pop production. To mark the release he embarked on a UK tour, culminating in a terrific performance at London’s Brixton Academy.

Drew’s latest record marks a shift in how he perceives the world around him, driven strongly by his first experiences of fatherhood, and opening both the album and setlist with ‘Grateful’ sets the tone as he questions what is most important to him, in tribute to his daughter. The theme of self exploration continues on the record with ‘Pursuit of Happiness’ and ‘Flesh and Bone’, which appears to be addressing his estranged father.

Creating a narrative has always been a core artistic strength, whether on his platinum selling concept album, Defamation of Strickland Banks, or in his directing ventures, such as 2012’s Ill Manors. The new album applies a broader brush approach, tackling themes as much as issues, but there is still a strong core of personal narrative running through it. This storytelling ability also transfers to his performance on the night as he commands the stage on tracks such as ‘Praying’ and the politically charged standout from the new record, ‘It’s A War’.

Having heavily previewed Heaven Before All Hell Breaks Loose with numerous single releases, there was plenty of familiar new material in the setlist in Brixton. Some of those tracks seemed instantly at home in his catalogue, with ‘Queue Jumping’ revealing greater vocal range and the thick bassline of ‘Guess Again’ shaking the Academy to its core. Other moments such as ‘Stranger’, however, strive for euphoria, but come across slightly safe, residing comfortably in middle of the road territory. The new album also sees Drew exploring new musical themes with mixed success, with the reggae tinged ‘Wait So Long’ and retro dance of ‘Mercy’ expanding his parameters further. The result is a diverse record, capturing his many influences in a way none of his previous releases have attempted.

However, it was his older work which most brought the crowd to life, with the riotous ‘Ill Manors’ and acoustic ‘End Credits’ stand out moments for differing reasons. The title track to the soundtrack of the film of the same name was a bolt of energy on the night, strobe lights roving across an ecstatic crowd, the stirring strings and drum and bass powered chorus unleashing some of Drew’s most cutting social commentary. ‘End Credits’ meanwhile was a touching tribute to a lost friend, bringing a moment of poignant reflection to the night. Pop-soul influenced ‘She Said’ and ‘The Recluse’ draw similarly rapturous responses, as it was clear that these tracks have lived well with fans over the past seven years.

Each release has seen Drew explore new ideas and sounds, with each turn more seemingly more disparate from the last. Whilst there are elements of hip hop on tracks such as ‘Stay Too Long’ that helped bridge the gap between the Motown tinged Defamation and the hard-hitting social commentary of Ill Manors, the inclusion of ‘Kidz’ as the solitary feature from his first album Who Needs Action When You Have Words demonstrated how far he has come from his breakthrough moment. Shot through with the aggression that defined much of his early work, ‘Kidz’ stood as an outlier to the rest of the set. Other moments of purer hip hop, such as the ‘Lost Your Way’ sit more comfortably due to the sung chorus, full band production and less direct, personal narrative. The messaging and ideas of sociopolitical problems has remained constant, but the means of delivery has moved on markedly.

What this night demonstrated more than anything was that Plan B remains one of the most intriguing acts in British music. He continues to defy expectation, exploring new musical avenues with each release and challenging and encouraging fans to follow with each turn. His performance in Brixton captured some of the finest moments from his diverse catalogue and his presence grew with every hit. Heaven Before All Hell Breaks Loose meanwhile provides another thematic shift in his career, its big-hearted pop and chronicles of adulthood reflective of his changing outlook on life. Whether all tracks stand the test of time remains to be seen, but there is no doubt that at least a handful of tracks will continue to feature in Plan B setlists for years to come.

Heaven Before All Hell Breaks Loose is out now via 679/Atlantic Records and available to stream HERE.

Plan B goes back on tour later this year. Dates below and tickets available HERE. 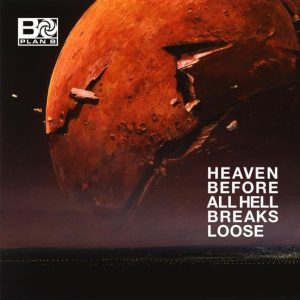