Cambridge upstarts, Grieving, are set to release their debut EP, Demonstrations, this month having just formed in late 2015.

The progress made by the band in this time has been impressive, and the five songs on Demonstrations serve as a summary of their influences and artistic development in this time. Largely demos, hence the name, this is the sound of a band finding its feet and sound, although most of Grieving have been involved in groups previously, most famously The Tupolev Ghost, and this experience comes through in Grieving’s music and lyrics.

Demonstrations has the feel of a lo-fi indie release with punk, indie rock, post-hardcore, emo and alternative influences weaved throughout. Production was handled by Matty Moon, who has also worked with Lonely the Brave, in Cambridge’s Half Ton Studios. The band have also paid tribute to a number of literary and artistic influences, with opening track ‘Little Armoured’, for example, titled after a book of poetry by Rebecca Perry. The song itself is an off kilter, angular post-hardcore number riddled with anxiety. Lead singer James Parrish moves from sneering to snarling, vehemently spitting out the lyrics with tangible emotion, before the track breaks down into a darker, heavier second half.

The vocal range of Parrish throughout the EP is impressive. On ‘Ghost’ he moves from almost soft and sensitive to rock roar with ease. ‘Ghost’ also shows a real knack for crafting a pop-infused chorus, as the song addresses the loss of a loved one, which could well hold the band in good stead as they pursue commercial successes. ‘Warmest Jets’ in contrast shows a British indie inflection in Parrish’s voice as the band deliver a powerful indie rock track, the last to be released from the record.

‘No Sleep’ is the record which has increased the band’s profile most significantly to date. Lyrically it looks at the impacts on day to day life of suffering from insomnia as Parrish sings, “counting sheep again… all I know is I’m not tired yet.” These implications are framed in the context of a working life and mature relationships, rather than the nights out and drinking that are often associated with tracks of this nature. This maturity reflects the stage of life the band members have reached, carrying on their own day jobs away from the band and having enjoyed previous successes and disappointments in the music industry.

‘Ownership’ sees Ned Wilson and Parrish’s thunderous guitar work combine with Matt Simper‘s pounding percussion in a track that is the most snarling and punky on the record, both sonically and vocally. This is in contrast with ‘Ghost’, and best represents the 90’s emo and Dischord/Touch & Go influences the band have previously cited.

Grieving have increased their number of live performances in recent months, supporting Muncie Girls and Three Trapped Tigers, and will only continue to grow with time and experience. This EP feels like a band searching for their identity and sound, and whist there are recurring themes these will no doubt be tightened and fine tuned. In the meantime what Demonstrations provides is a raucous, noisy and thrilling insight into an emerging band with real potential.

Demonstrations is out on July 29th. 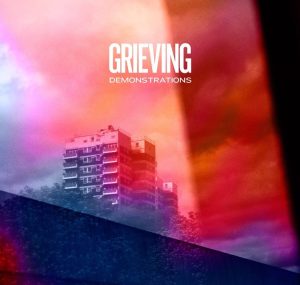