Storms have just dropped their much-anticipated debut album, Her, via Manchester’s MUK Records.

90’s revivalism has enjoyed something of a purple patch in recent years, with bands such as Dinosaur Pile-Up, Darlia, Drenge and Royal Blood finding commercial success, whilst evoking memories of the fuzz and distortion of rock in that decade. Storms are a London four piece riding the crest of that scene, and have enjoyed widespread plaudits and praise, widely tipped as the “next big thing” for British music. Weaving together heavy guitar riffs and indie rock lyricism, drenched in rich melodies, this is the sound of modern British grunge, full of youthful vibrancy, attitude and shifting sonic dynamics.

Lead singer, George Runciman, delivers the opening lines of ‘Girl’, the album’s lead single, with almost palpable ardour, leering his way through, “I can’t seduce you, never see my luck, on the outside I can see how you fuck,” as he yearns for the girl of his dreams. The track serves as a lighthearted introduction to the band, completed by an American Pie style video and Weezer-esque riffs.

Fellow singles, ‘Swell’ and ‘Shame’, continued to establish the blueprint for the Storms sound, with their dynamic mix of quiet and loud, reminiscent of Silverchair but covered in an intoxicating Brit-rock sheen. That Brit-rock sheen is never more evident than on ‘Movies’, which could well be a Blur track, and brings to mind fellow revivalists Superfood, who the band have previously played live alongside.

The mid section of the album transitions towards power pop infused alt-rock in the vein of Pixies and Teenage Fanclub, on ‘Vision’, ‘Undress’ and ‘Plague Machine’. The choruses are more anthemic and some of the guitar work and instrumentation more spacious and defined. Elsewhere, the band show themselves capable of sounding soft and delicate on the acoustic ‘Ballad Of Me, You And Eric’ and ‘Bird Of Prey’. There are also dashes of psychedelia and shoegaze as the record pulls together so many strands of alternative rock, and blends them into a contemporary mix. It is testament to the band that Her does not come across as a nostalgic karaoke session, despite Storms wearing their influences so clearly, and they weave these sounds together into a cohesive record.

Live set opener, ‘Special’, is an album standout, with its anguished tales of young adulthood. Lyrically this is one of the strongest tracks on the album, with it tales of drug abuse, suicide attempts and a personal account of the sense of failing and inferiority that can haunt so many. ‘Undress’ meanwhile looks at a relationship going stale physically, and all the things people will try in an effort to make it work. The band have proved themselves to be capable of writing smart, relatable tracks of love, lust, delinquency, day to day mundanity, isolation and anxiety. Much like Brit-pop before them, these are tracks for the everyman, but delivered with a star quality and sense of exuberance, rather than the disengagement that defined much of Seattle’s scene.

The album also features live and demo versions of many songs on the record, and these tracks demonstrate how musically tight the band are. Storms are driven by Gary Lee’s heavy, powerful drumming, which is complemented by the grooves of Yacob Andersen on bass, the distorted guitar work of Felix Howes and set off by the impressive range and vocal control of Runciman. Previously unheard demo, ‘Better’, could well have been included in the final cut of mastered tracks for the album, and suggests many more could have sadly fallen by the wayside. The album was produced and mixed by Steve Osbourne (New Order, Elbow, U2, Happy Mondays, Placebo), with Henry Broadhead (Pins, Everything Everything) as sound engineer, delivering a crisp, modern, balanced finish to the record.

Storms’ music is also accompanied by a strong supporting image. The modernist style artwork was designed by Don Tomas from the band Whyte Horses, and features Mary Coogan (Steve Coogan’s niece) whilst the video for ‘Shame’, with its dark exploration of peoples deepest thoughts, was directed, produced and edited by Howes and Andersen, demonstrating a broader artistic vision behind the band.

Her feels like the sound of a band hitting their stride, melding the influences of their youth into a captivating sound, worthy of the plaudits it is receiving. Capable of being both dark and intense as well as melodic and catchy, this record will continue to push the boundaries of the vibrant British grunge scene. Whilst it may feel like a trip down memory lane for some, it also serves as the introduction to a talented and ambitious band.

Her is out now on MUK Records and available to buy/stream HERE. 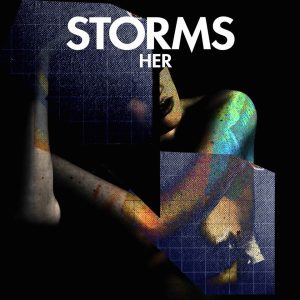