London four-piece, Duke of Wolves, are set to prove that good rock music is not just a thing of the past.

The band – formed in January 2016 and completed by Jim Lawton (lead vocals/rhythm guitar), Sara Fedi (bass guitar/backing vocals, Orlando Formaro (lead guitar/backing vocals) and Tom Romer-Smith (drums) – offer up cleverly insightful lyrics atop of ‘hard hitting riffs’ and idiosyncratic melodies that are often amiss in the rock scene today, giving us more than an excuse to brave the cold-coming weather to get out to their gigs. Having already released two singles this year, ‘Hollow Eyes’ and ‘It’s Real’, their success continues to grow, with multiple features on BBC Radio as well as performances at Isle of Wight Festival, Standon Calling, London’s Hard Rock Cafe and global video series, Sofar Sounds, to name a few.

We spoke with Lawton, who names The Beatles as his initial inspiration behind a career in music – “Watching that Shea stadium performance as a kid just made me think… yeah, I’d like to do that.” – and describes their next single as a political call to arms. “‘They Laugh’ is our third single release this year, and is essentially a call to political arms against the corrupt elite (bit intense right?!). It’s an invitation for people of a liberal mindset to abandon apathy and actually do something rather than just getting ‘laughed’ at.”

How did you come to name the band?

The process involved several months of meditation, precipitation and um… condensation? The Duke came to us as an astral being declaring that he had seen the future. While he didn’t go into much detail at the time, he said that if we call ourselves Duke Of Wolves then something would happen… we like it when something happens.

And do you write songs together?

Everyone in the band has their strengths, and all are capable of writing songs, currently I will provide the raw idea in the form of an acoustic rendition, the band will take it, cook it, season it, and add a side order of je ne sais quoi to make the songs worthy of the Duke. We also jam sometimes.

For me personally (because all of the Duke Of Wolves gigs have been great!), it would have to be when I was 16 playing at a venue called The Pumphouse Youth Club in Watford. Now I want you pay special attention to the word ‘youth’. I solemnly swear that I met Charles Darwin that night. During the performance there was a lady – 80 years old? Not that I was judging – shaking maracas as she charged up and down the aisle yelling at me to play ‘American Pie’… this was in the middle of one of my own songs; in hindsight I admire her tenacity, and The Pumphouse will forever be etched into not just my memory, but my psyche.

How do you feel about the music scene today, do you think it’s harder to break into the industry?

It’s easy to say that it has got harder, but the truth is, there’s always been something which is both a gift and a curse, like the internet, or in the past, record labels who all but suck the life out of their artists. It’s a tough world, but we love what we do, and there are some amazing people out there who help and support musicians. Our manager is awesome, good old Rick. Did you hear that, Rick? I can be nice.

If you had to choose three people (dead or alive) to cowrite a Duke of Wolves song, who would they be?

Do your dreams ever influence your music?

Yeah sometimes, but sometimes no… I’m still struggling to write a song about a goat wearing a pork pie hat who made me coffee… maybe that was real? Ideas are day dreams in a way, although I’m still unsure whether it’s the writer who finds the idea, or the idea who finds the writer. I think Noel Gallagher said it’s a bit like fishing, you could be there for hours, sitting on the river bank, but eventually you’ll catch something, sometimes a little fish, sometimes a unicorn… I don’t think he said the bit about the unicorn.

Would you rather live in a world where everything was written in comic sans or where everyone spoke simlish?

Simlish all the way. Come on, was that even a question?! ‘Disgrubisfanchake’ if you know what I mean.

What would be your band motto if you were a brand?

Describe your sound in three words.

Duke of Wolves release their latest single, ‘They Laugh’, on November 21st, on all the usual platforms with a free download available on SoundCloud. Their final gig for the year takes place at The Monarch in Camden on December 7th.

We are expecting a LOT of people to be there so come down and go mad! 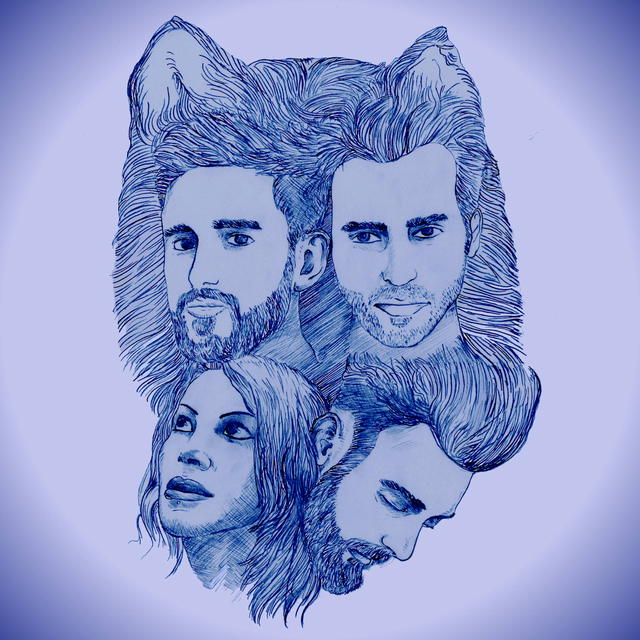