Introducing The Howl & The Hum: Interview w/ York’s One to Watch

It shouldn’t be too difficult to place a four-piece guitar band into a genre, but The Howl & The Hum do things a little bit differently.

Yes, they could quite accurately be described as playing a dark hypnotic style of indie guitar pop with more than a smattering of post-punk, but that’s only scratching the surface: an intriguing dichotomy of attention to detail and a seemingly carefree attitude makes for one of the most exciting bands to emerge from the collaborative York scene in recent times.

On a sunny park bench opposite their beloved Brudenell Social Club in Leeds, FMS chatted to the four-piece about the virtues of playing live, their rather interesting choices of band name and song title, the enforced deletion of their Wikipedia page and their songwriting prowess. 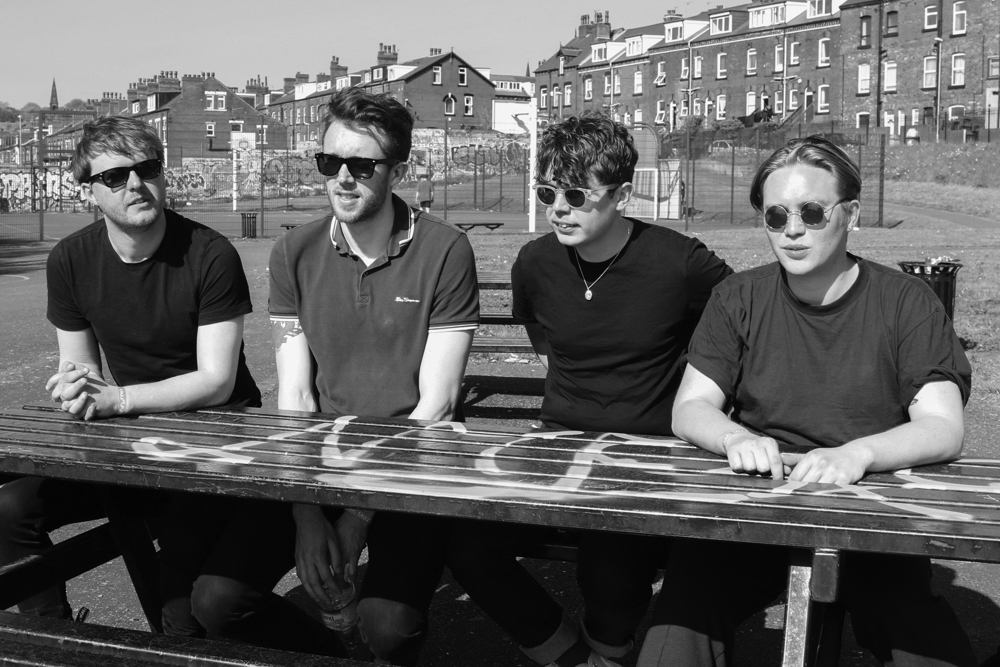 The Howl & The Hum are turning heads far further afield than their native Yorkshire. With some intense recent touring and a self-confessed ‘constipation’ of new music in the pipeline, they’ve hit the ground at pace and there’s no sign of it slowing down anytime soon.

To be fair, this new band from York isn’t really that new. Having started off as an acoustic duo comprising singer-songwriter Sam Griffiths and bassist Brad Blackwell, the lineup was fairly fluid until former Littlemores Conor Hirons and Jack Williams completed the jigsaw last year.

The Howl & The Hum was born, and, without delay, they set off at a rate of knots: appearances at Neighbourhood Festival and Loopallu were followed by a tour of the Scottish Highlands, taking in around ten venues ranging from the back room of a local pub to an over-capacity crowd in Orkney, which is accepted by the band members as being one of the best gigs they’ve played.

The Highlands Tour was a shrewd move: it gave the band time and space to hone their live performances away from the spotlight.

“Playing live brings out these strange creatures in yourself,” says frontman, Griffiths, running his fingers back through his floppy hair in the warm breeze. “In a rehearsal room you’ve got to stay relatively tame – you’re thinking about your tea, what time you’re going to bed, that pint after practice. But when you’re playing live, it’s like you let go a little bit. It’s like playing 20 times in a rehearsal room – playing live will tell you so much about yourself; that’s how songs can be chucked out immediately or go on forever.”

The Howl & The Hum released their debut EP, Godmanchester Chinese Bridge, in Spring 2017. With a beautifully delicate opening, the melancholic title track builds up into an emotional crescendo before falling back down again dramatically and demonstrating a real maturity in their songwriting and musicianship.

The rather unusual song title relates to a landmark in the Cambridgeshire town of Godmanchester that Griffiths used to pass when he travelled between York and Essex. “I always thought it was a beautiful collection of words and wanted to shoehorn them into a song,” he explains, before he reels off a list of other random words and phrases such as ‘Avon Lady,’ ‘East Midlands Parkway’ and ‘Fiat Punto,’ which have all found their way into song lyrics recently.

At the time of writing, it’s still the only song with the name ‘Godmanchester’ in the title, and they’re keen to play there in the future – perhaps even on the bridge itself.

Of course, the name of the band is also more than a little unusual. “I wanted a literary reference,” says Griffiths, a former Literature and Philosophy student, pointing to the beat generation poem Howl by Allen Ginsberg. “But it also reflects our ambient sound.”

It was also a conscious effort to get away from the plethora of bands using one plural word for their name, although they acknowledge it is a little cumbersome. “On our tour of Scotland, we doubled the capacity of the venue in Orkney, which is probably due to our unusual long name,” laughs guitarist, Hirons. “Although a downside is that you always get printed really small!”

There is another downside: “We did have a Wikipedia page, but our name kept on being changed to ‘The Bowel and the Bum.’ We think it was sabotaged by our mates.”

On a more serious note, The Howl & The Hum (correctly spelled) base their songs on a mutual appreciation of music in its primitive form. “We don’t have to add something for the sake of it,” explains Griffiths. “If a part of a song doesn’t need you to play for four minutes, then swallow your ego and don’t play.”

Once Griffiths has worked on the lyrics and melody, it evolves and takes on many shapes as it goes through the other members of the band, going through several iterations before taking on its final form, which might then even differ from what they play at a live performance.

“It’s one of the most exciting things about being in a band,” continues Griffiths, who appears to be enjoying a different direction from his former solo career. “Where I’d previously stop writing at the end of a song, it’s now how far we can take it and what the others can add to it.”

The four-piece embarked on their first English headline tour earlier this year to coincide with the release of their single ‘Portrait I’, which includes more hip-hop elements and shows another dimension of their eclectic style.

“We don’t think we’ve figured out what genre we are yet,” ponders Griffiths, “but we know what we’re influenced by. The first thing is the lyric and the melody, then we use the other instruments to soundscape that. We’re not trying to replicate anything. We’re aware we play within the constraints of poppy guitar, but it’s also post-punk and hip-hop elements on the pad; I think we start to sound like Talking Heads even though I think I’m writing like Bob Dylan.”

Although Griffiths and Blackwell now live in Leeds (close to the Brudenell and – very importantly – close to the free daytime pool table, as well as the pies and pizza on offer), The Howl & The Hum are keen to stress they are very much a York band, with their rehearsal studio in a secret location to the north of the city. The faces of Griffiths, Blackwell, Hirons and Williams are familiar to many from the talented local music scene, which, as the band agree, is like one enormous York collective with tremendous comradery and input from all those involved. “It’s not a competition here, because everyone chips in,” says Hirons. “The first people to support you are your mates.”

The Howl & The Hum have had a busy 2018 so far, having played a big part in the summer’s festival season, including performances at Latitude, Citadel, The Great Escape, Live at Leeds, Standon Calling and the BBC’s Biggest Weekend, and there’s a lot more to come.

Although they have no EPs or albums to release in the near future, they have a huge amount of music in the pipeline and are working out the order in which to release their songs as singles, meaning we’ll continue to be treated to new offerings throughout the rest of the year.

It’s clear that these down-to-earth musicians are serious about their music without taking themselves too seriously. Indeed, it’s the level of thought and attention to detail, coupled with their carefree style and intent to go out there and enjoy themselves, that has enabled them explore more freely, resulting in a fresh, dynamic sound. The intellectual melancholy genre may well have been born.