This Friday see the release of ‘You’re Evil’, the latest single from Coves, ahead of sophomore album, Peel, on April 1st via 1965 Records.

Peel is the follow-up to 2014 debut, Soft Friday, which saw critics draw comparisons to the likes of Spiritualized, Lana Del Ray, The Shangri-La’s, plus Brooklyn trend-setters Crystal Stilts and Vivian Girls. The lead single form Peel, ‘Stormy’, was released in December 2015. “I’ve developed into a new person but I’ve still got that passion,” say Beck Wood (songwriter/vocalist) of the first single, “It’s a good transition song because it has elements of our old album but also elements of our new album.”

The new album was produced by Cam Blackwood (George Ezra, London Grammar) and completed in October 2015. Keen to work with the band, he took the home recordings that Beck and John had made during “red wine holidays” at John’s East London spare room studio, to Studio Voltaire in Clapham and honed the pop side until it was as sharp as their psychedelic garage edge. The result was a second album that promises to be cleaner, harder and just as fiery as ever. We caught up with the duo – completed by John Ridgard (songwriter/guitarist) – to find out more.

When did you know you wanted to break in to the music industry and who were your primary influences?

John: I don’t think with this project I have had much of a desire to break into the music industry, for our generation it’s kind of a dying industry. I would describe it as an annoying yappy dog that you kind of have to put up with if you want people to hear the music you make and play cool shows. My primary influences I guess came from a mix of 60s pop and soul from my parents, through to British indie I listened to as a youngster in the 90s and a lot of American alt like Pavement and Flaming Lips.

Do you find you’re still able to draw out influences from the music of today?

John: So much yes, there are some amazing bands like Dilly Dally, Crows, Sunflower Bean and Heron Oblivion… the past year has been pretty exciting I think.

Your sound has evolved between your first and upcoming albums, Soft Friday and Peel (respectively), how do you feel you’ve evolved with it?

John: Just naturally, no plans, just making music as it comes. There has been a big change in circumstance as the first album was recorded in Leamington in our own studio and now we are in London and after demoing this in my flat went and recorded with an actual proper producer in an actual studio…so I guess that has provided a big change in atmosphere.

The track, ‘Stormy’, features a mix of great guitar riffs with a psychedelic feel, what was the writing process like behind it and how did you capture the sound you wanted?

John: I can’t remember what I was working on but it was something complicated and testing so I took a break and had a mad desire to just put down a straight forward drum beat and bang out some chords for fun and stormy came from that musically.

‘You’re Evil’ has a more ominous tone and the guitar riff is almost reminiscent of a ‘kick ass’ style superhero movie, what was the drive and creation process behind this track?

John: For me I was just having fun messing around with a new fuzz pedal I had bought and it started to sound pretty vicious so I handed it over to Beck and she took it from there…

The music video for it has a really visually appealing feel with the sinuous sort of muted color palette, and quasi-dramatic imagery, how did you come up with the concept for it?

Beck: So me and the director, Jos, came up with it when I showed him a few images I had collected for an idea, the colour palette inspiration was from Tinker Tailor Soldier Spy and my outfit was part Margot from The Royal Tenenbaums, part Blondie. Accent colours on me (red dress). Reasons were to isolate me and my thoughts from a muted dull and inescapable setting – an old British rail station on a pier.

There’s a lot of creativity instrumentally and technically, how do you piece it all together?

John: The magic of the convenience of today’s recording technology means that you can just spend your free time at home messing around and songs kind of slowly evolve from just messing around… I think that’s why today’s music is evolving so much as it’s not constrained to the old model of writing on an acoustic guitar, rehearsing it up with a band and then spending a month doing the best you can to capture it in someone else’s studio.

The album artwork for Peel is very cool, did you design it?

Beck: Thank you very muchos. Yeah I designed it, I do all our art work… Went to an M.C Escher exhibition and got super existed so I decided to work out how to do his Bond of Union but with John and my faces. It was hard work. I’m very happy with it though. Also chose it all to be black and white so it’s a blank canvas for the listener, they can listen to the music and see what colours they come up with.

What has been your favorite gig so far and why?

John: There were loads on the last album, the American shows, Europe, playing venues like Roundhouse and fests like Glastonbury and Latitude… We were so lucky on the last album that I would find it easier to name the bad ones as the great ones were too many.

What is the most exciting thing about heading out on tour again and being back on stage?

John: The feeling you get after a whole run of gigs where things start to gel and the show starts to come together. You can’t rehearse that; it just comes from playing shows but you really feel it as it grows.

Peel is set for release on April 1st via 1965 Records, and available for pre-order here. 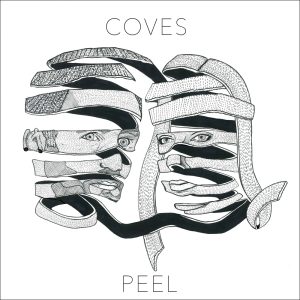 May
19-21 – The Great Escape Festival, Brighton