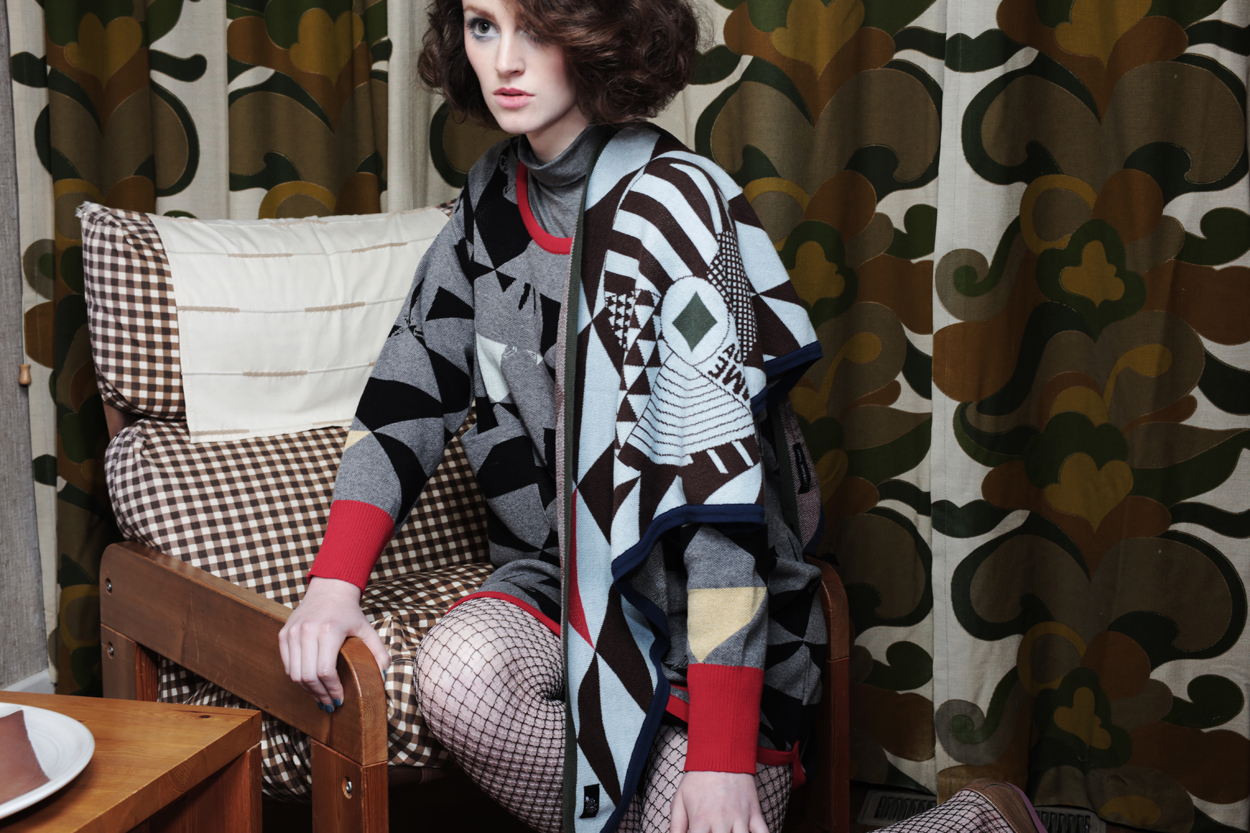 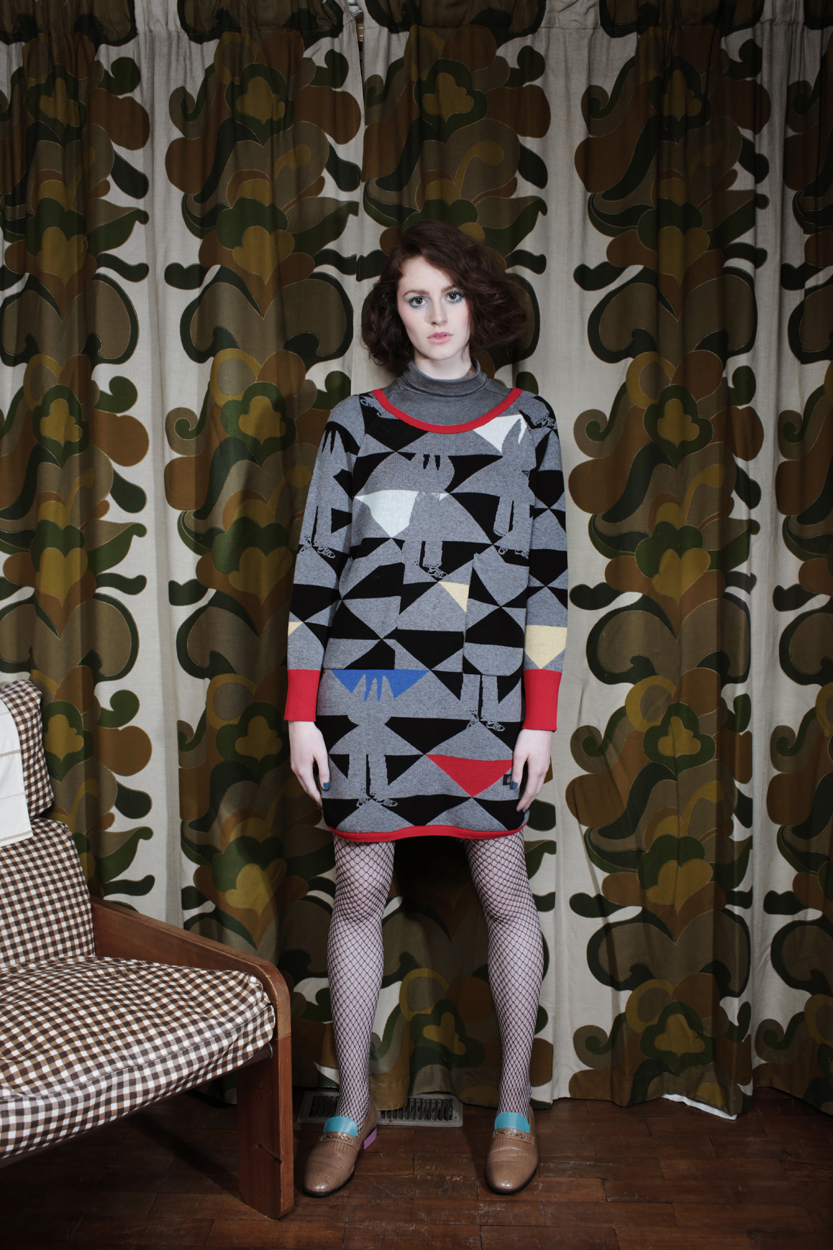 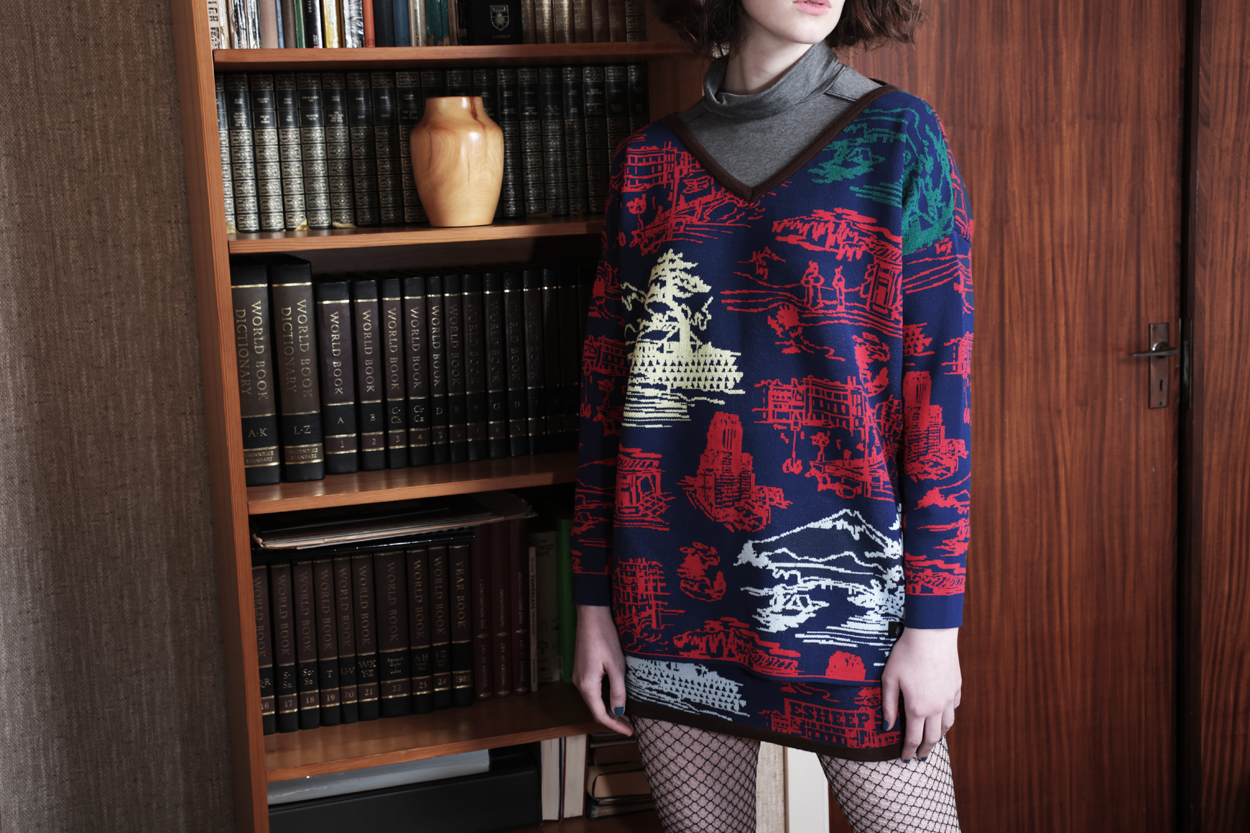 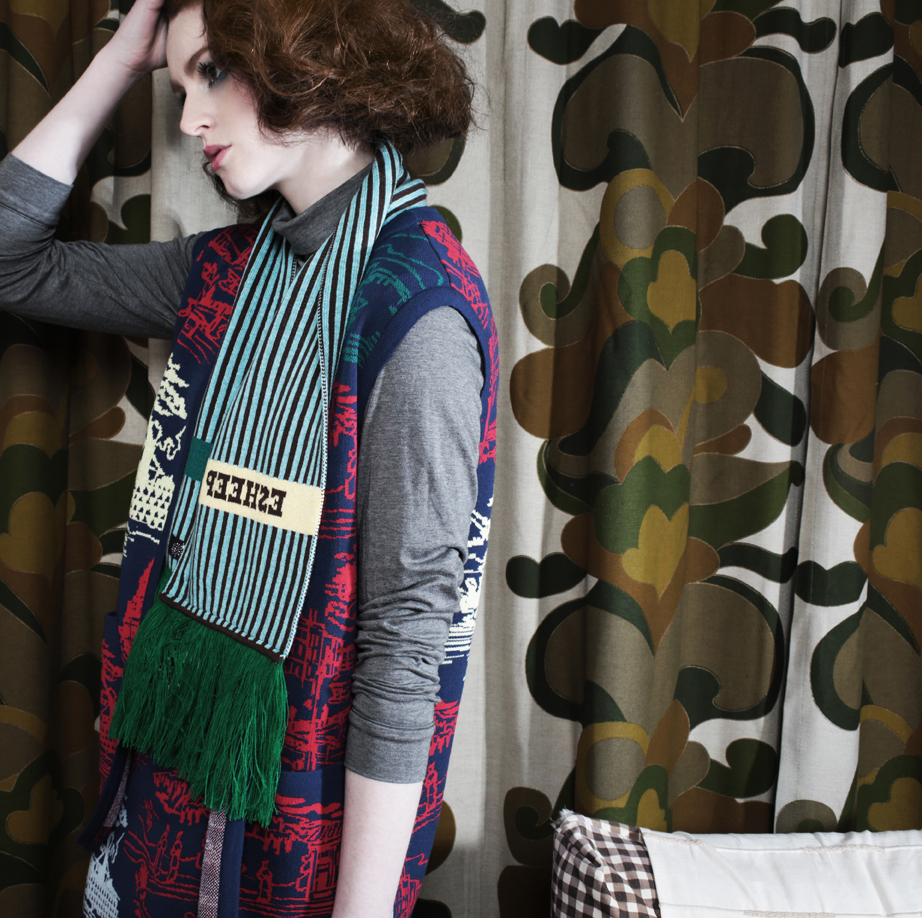 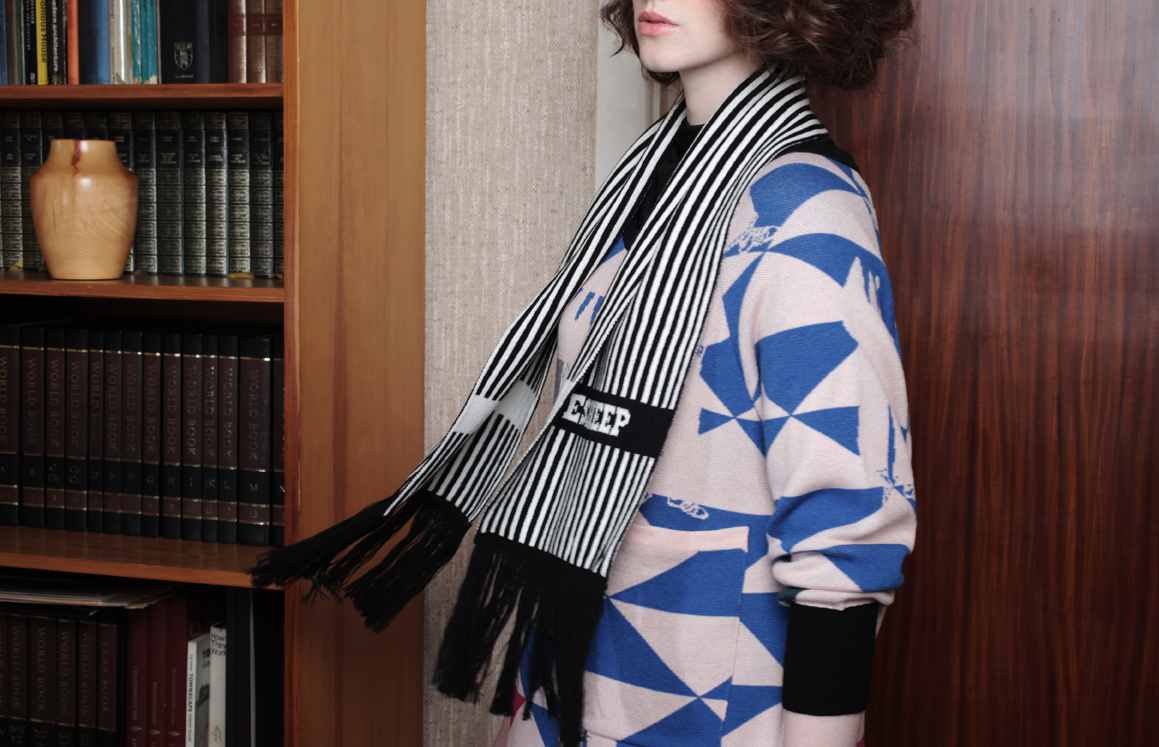 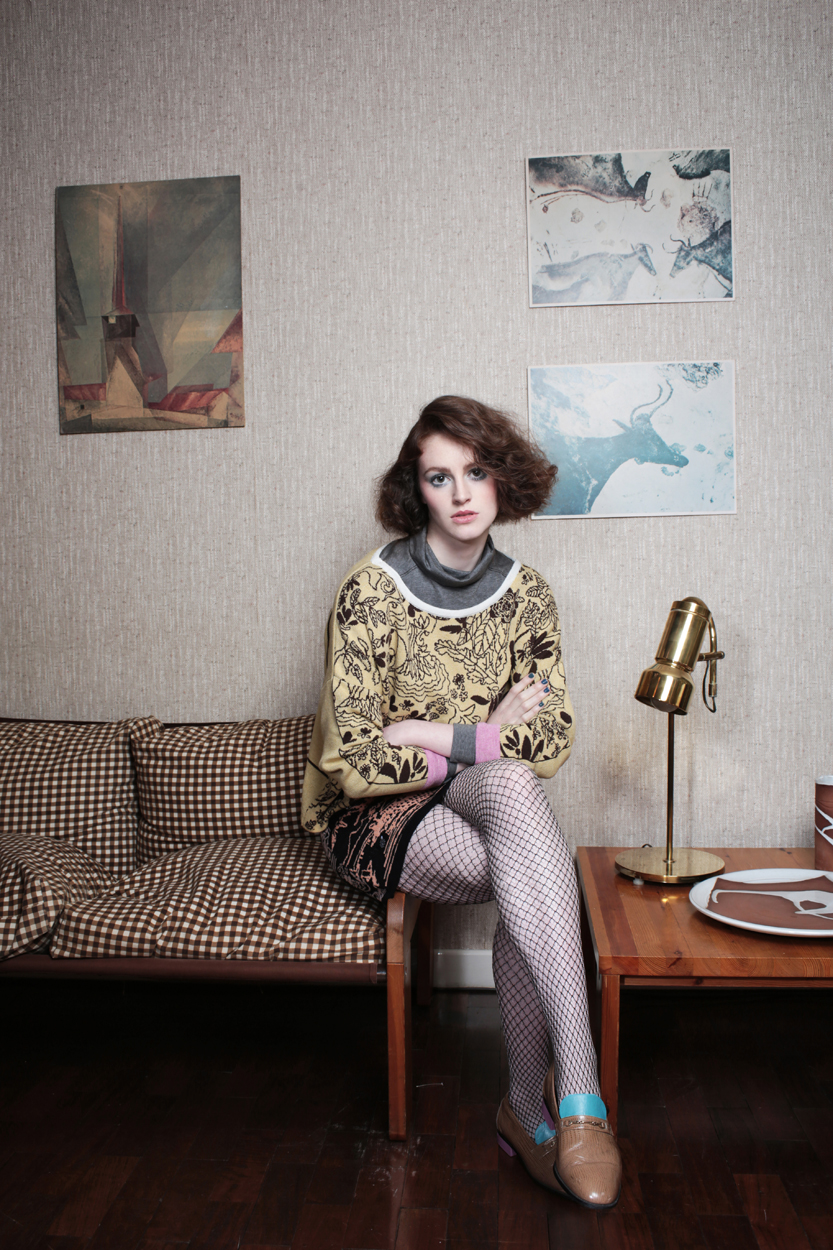 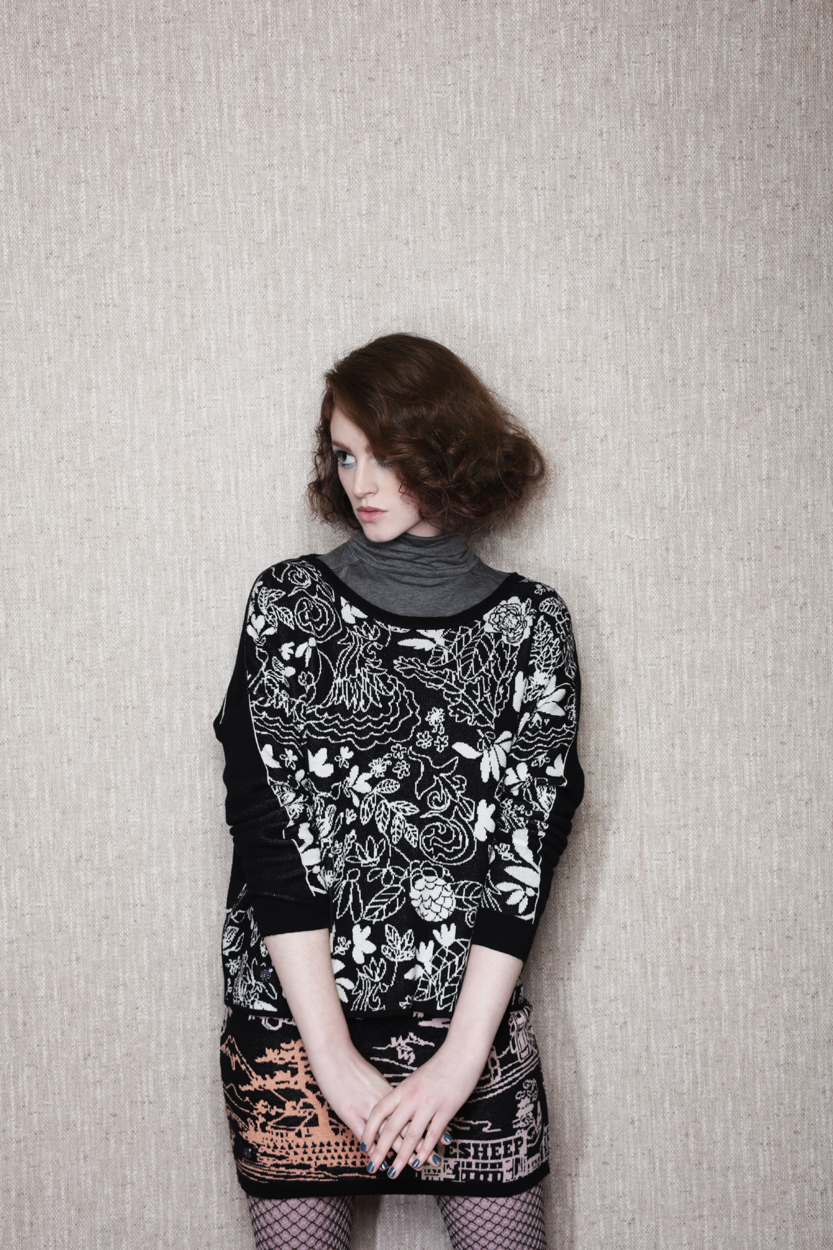 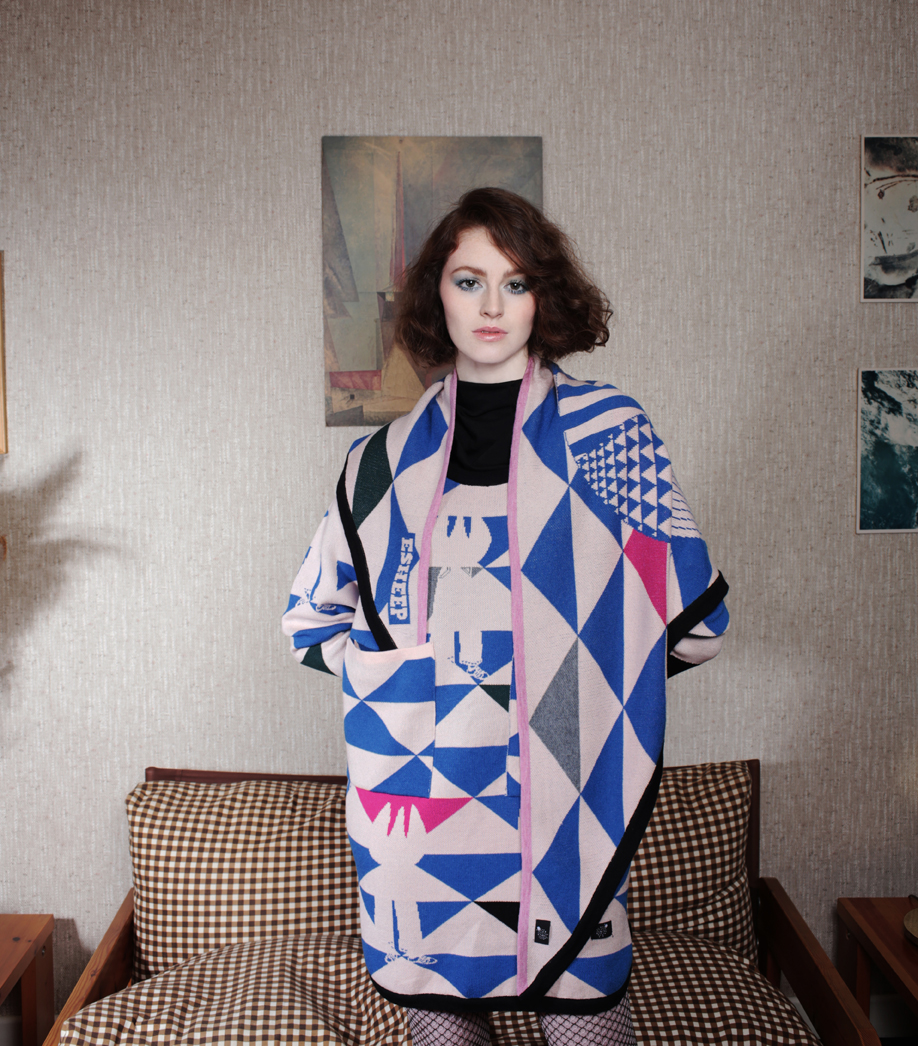 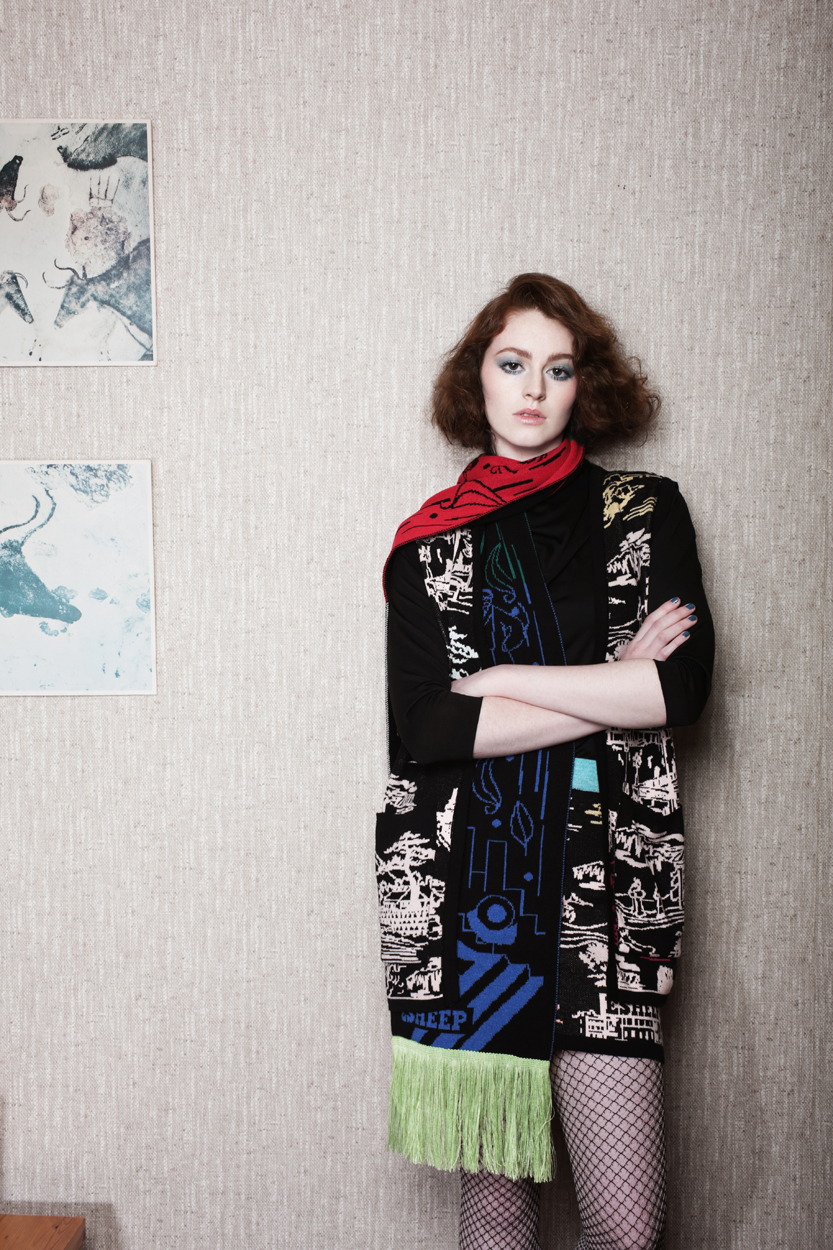 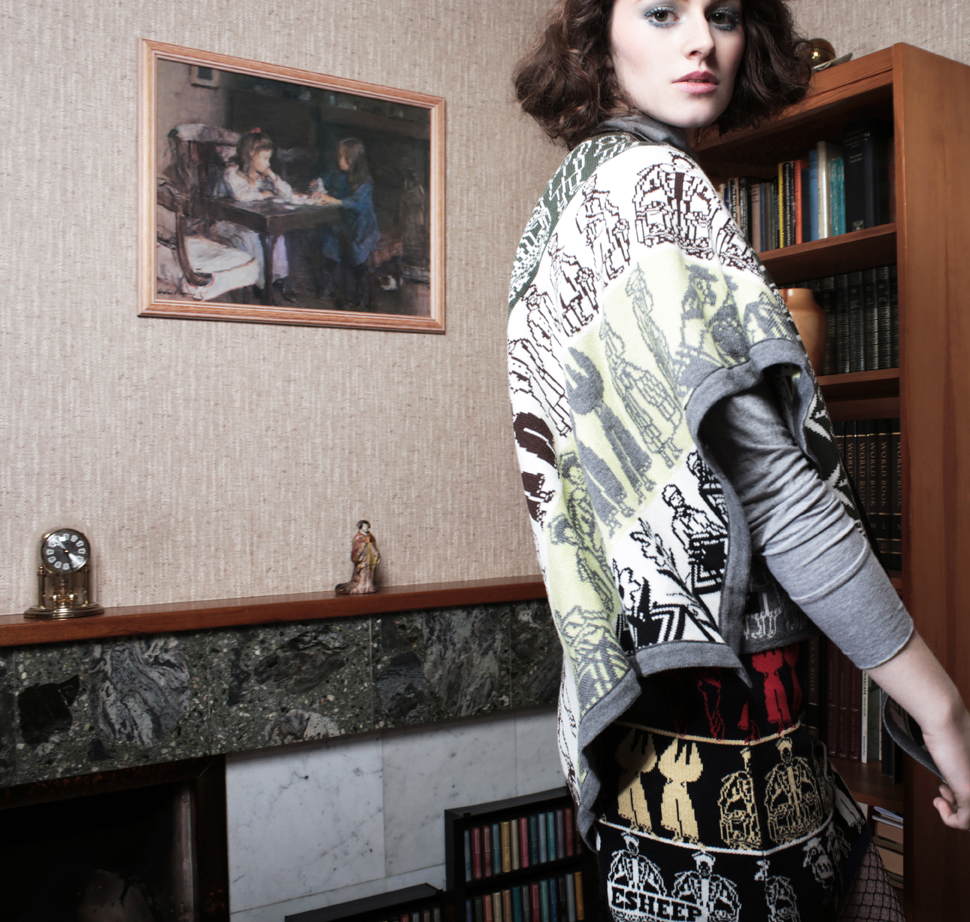 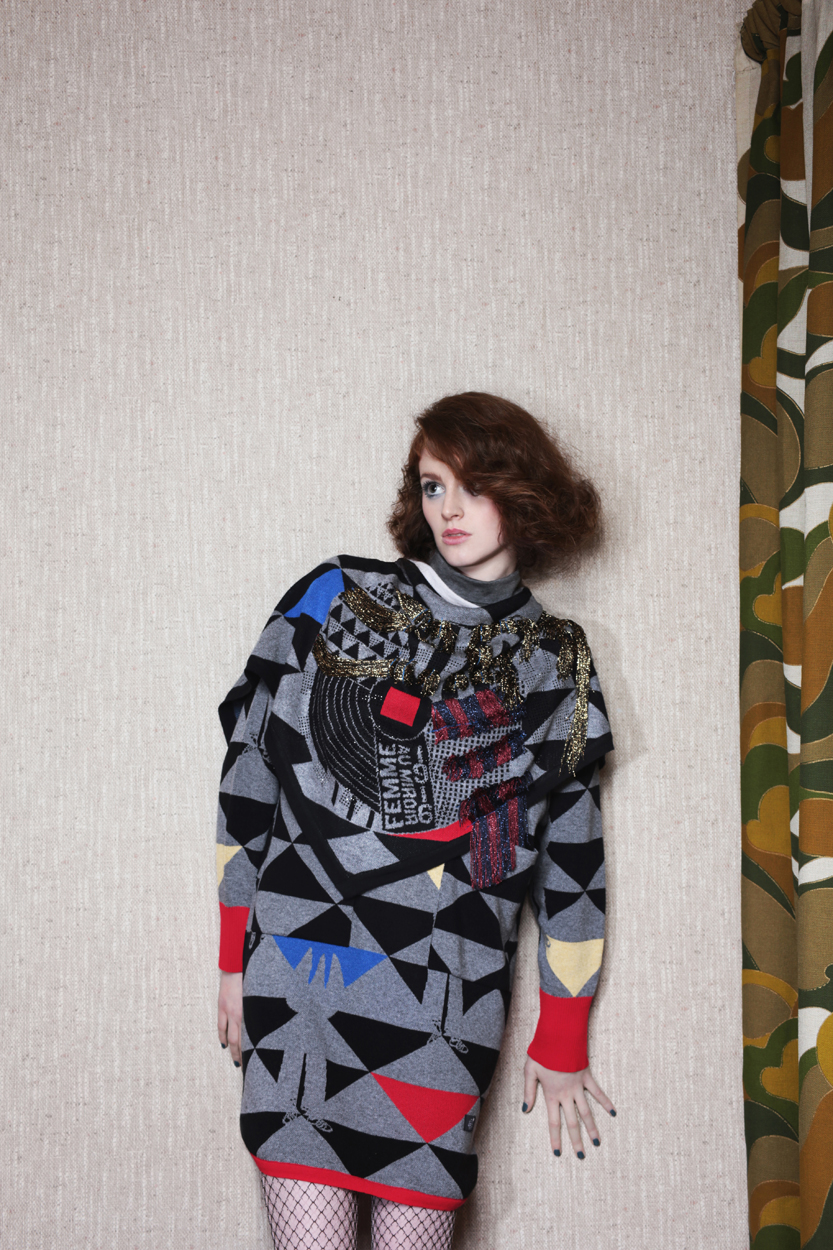 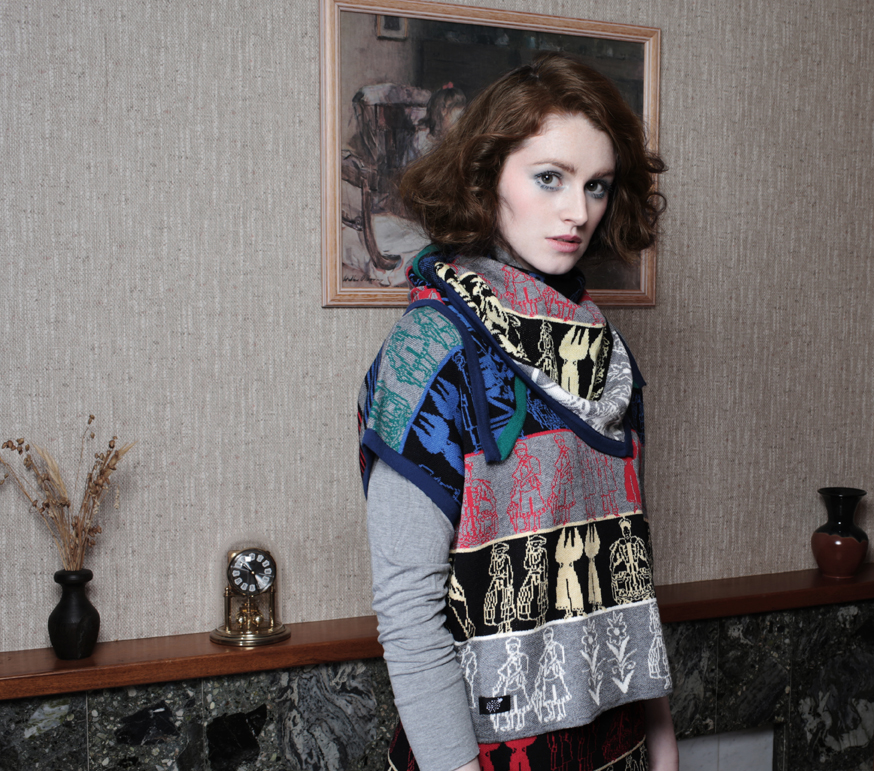 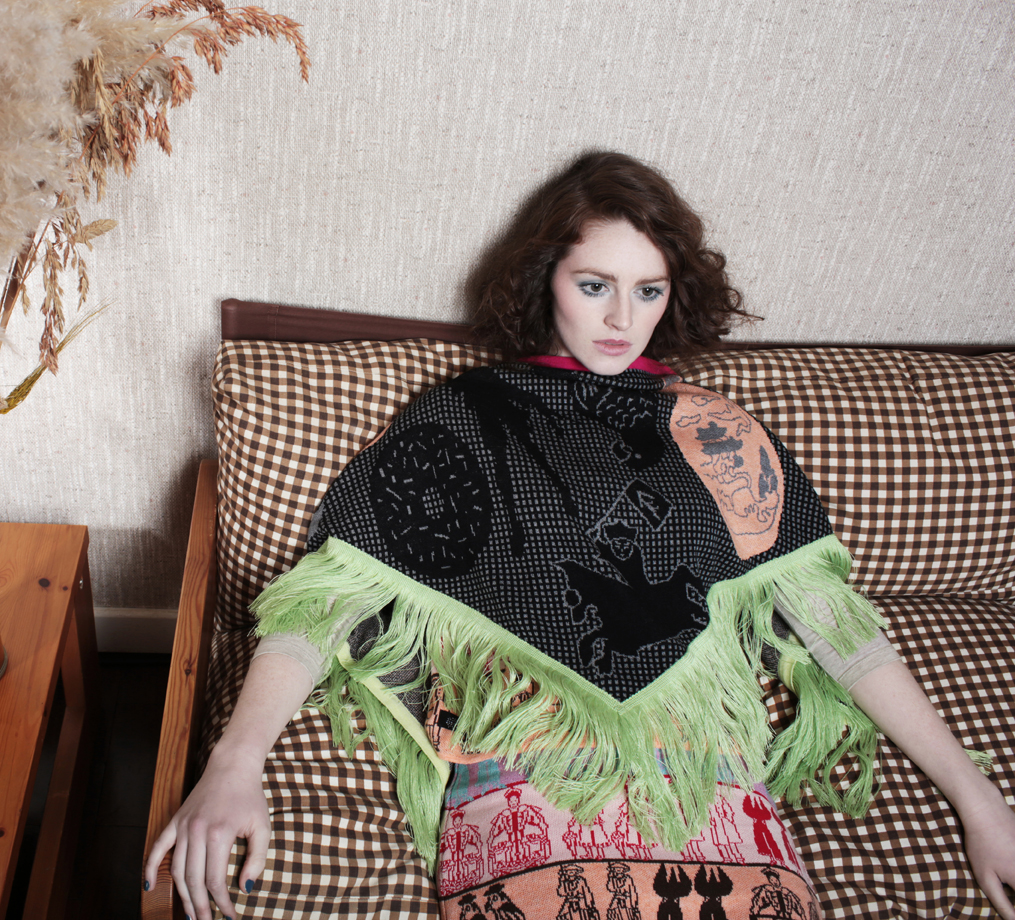 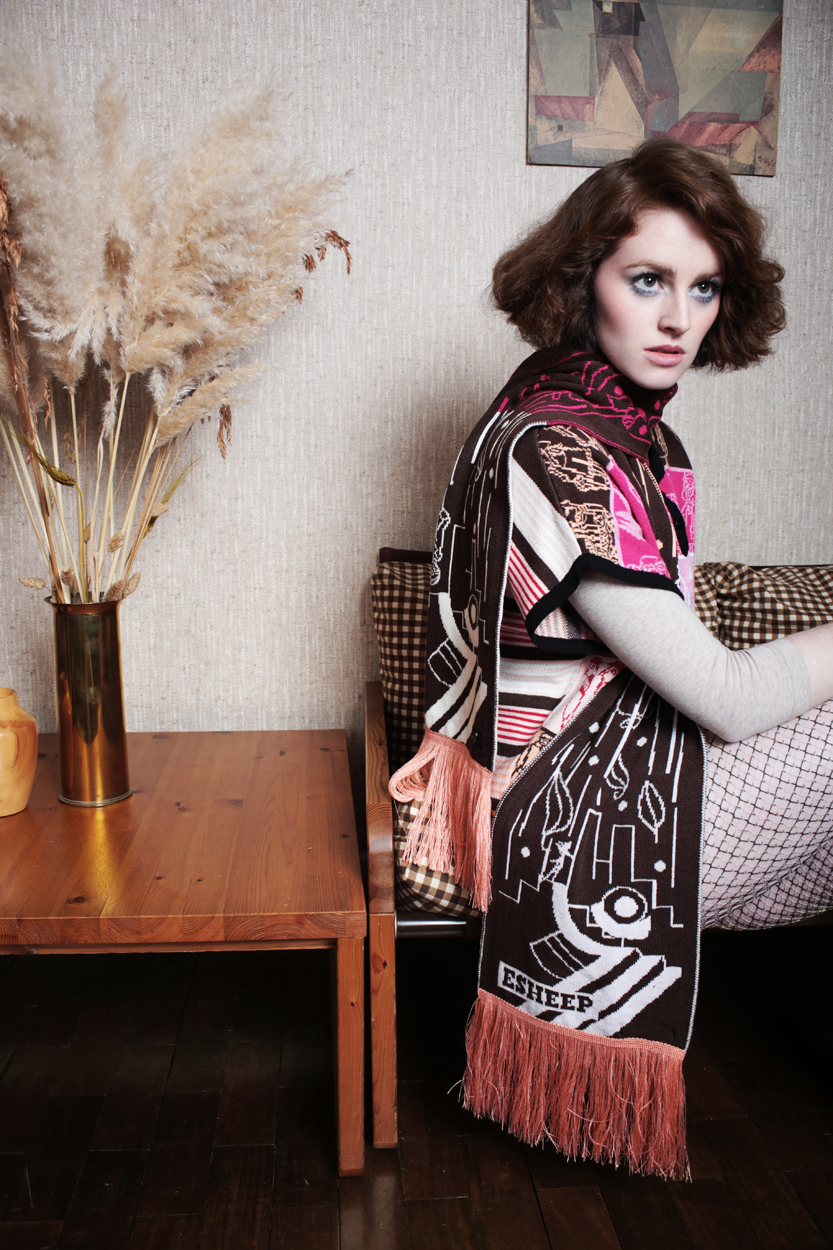 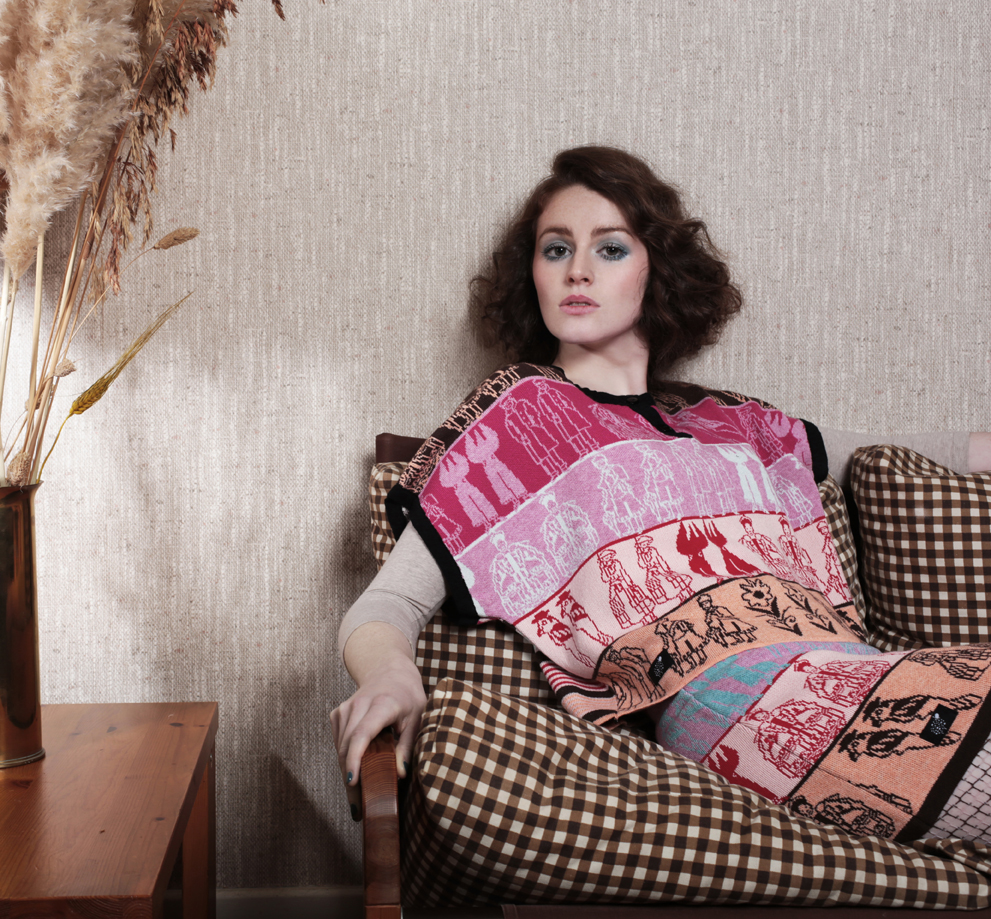 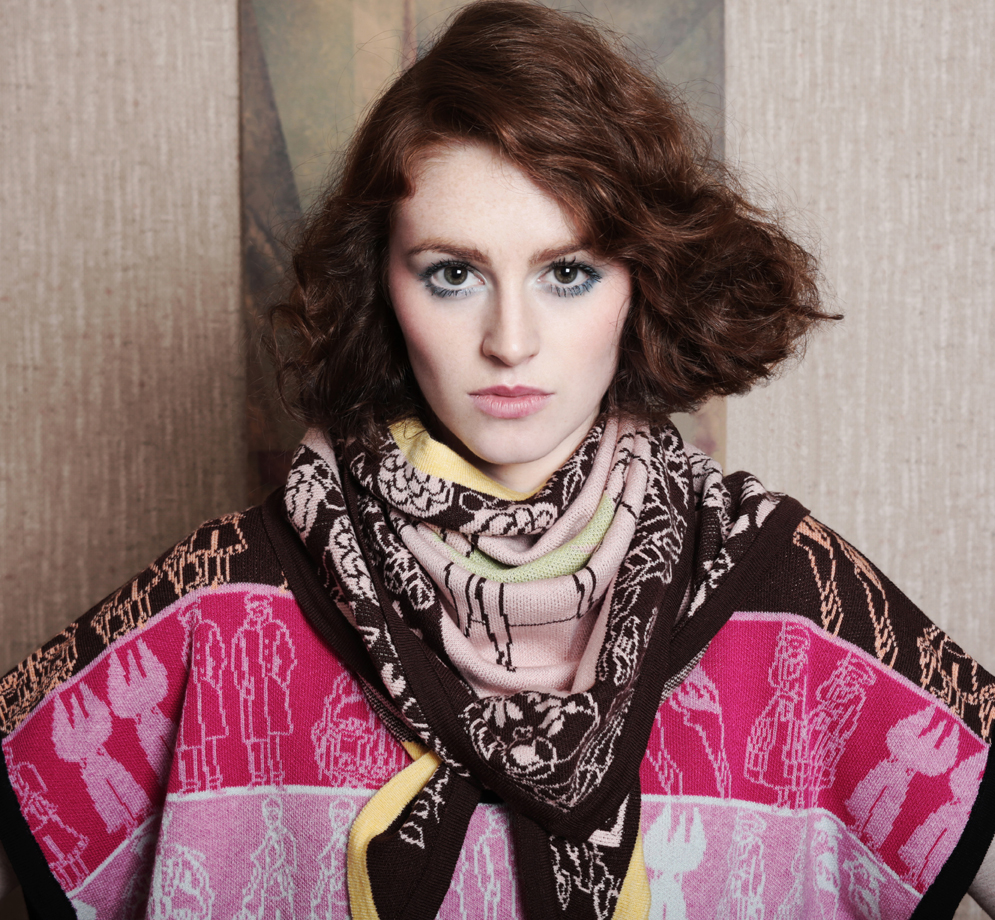 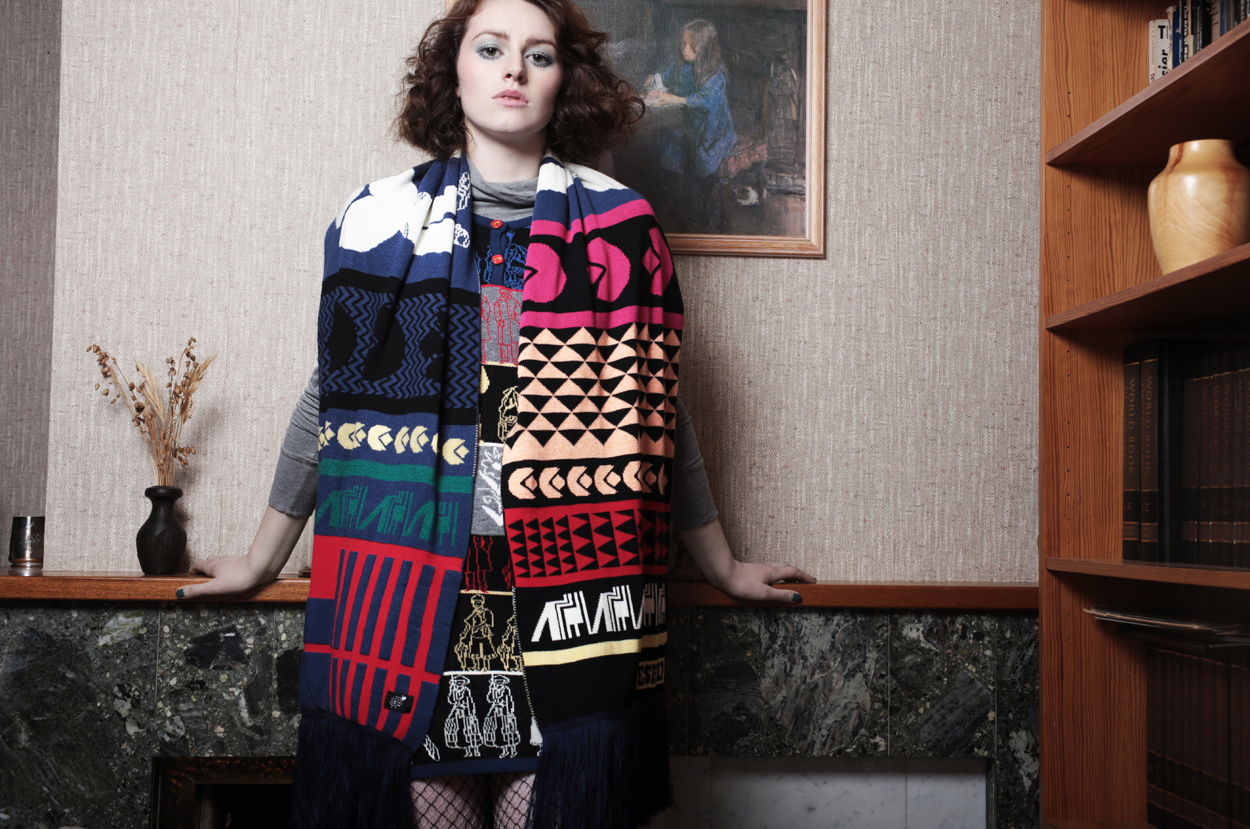 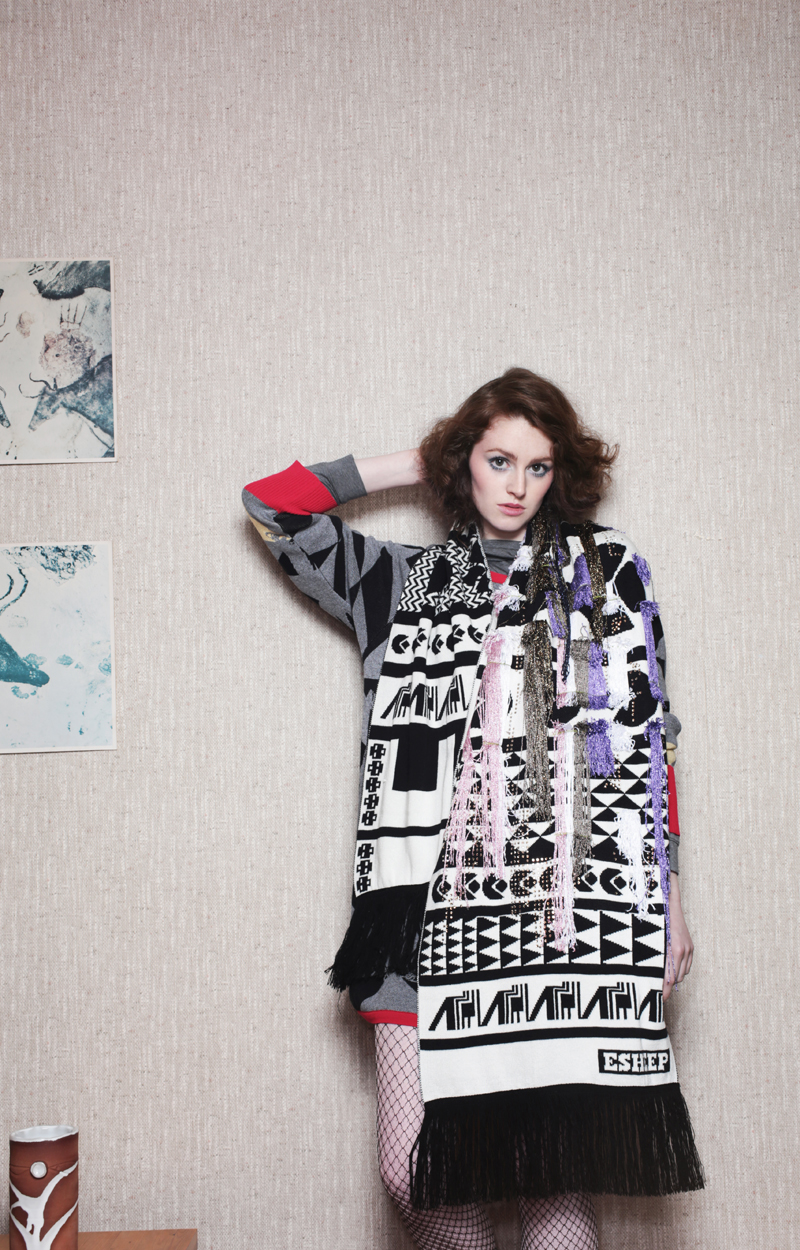 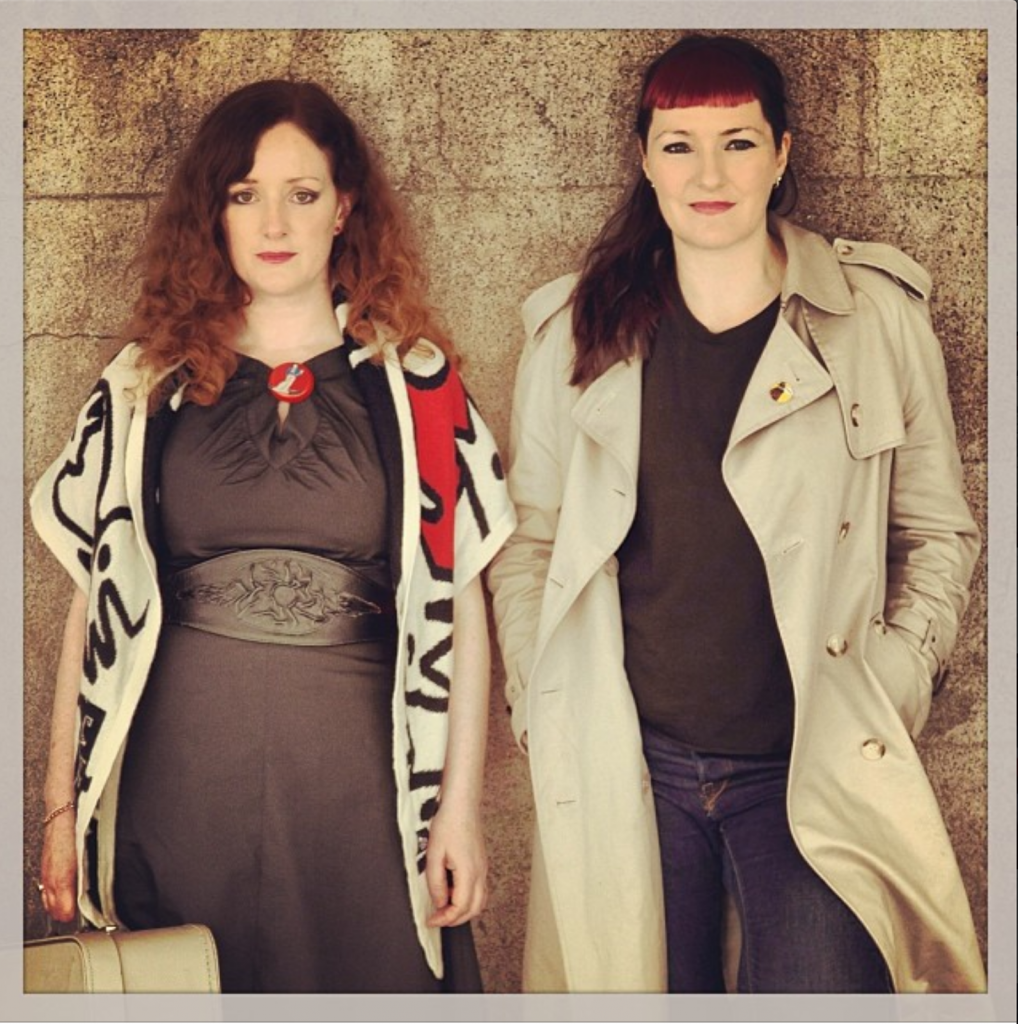 Designers, Brenda Aherne and Helen Delany, founded their authentically eccentric label, Electronic Sheep, from the rubble of nostalgia, history and childhood memories from the streets of Dublin.

Known for their knitwear with haunting faces, striking pastels and wonderful textures, their latest collection pays homage to Parisian Bohemia, with patterns and designs evocative of the retro streets of Montmartre, and the people filling the apartments of Gertrude Stein. From Picasso consuming platefuls of pasta, to punk rock Paris to meat cleavers, this label of punk-rock bohemian, underground cult status is quickly tapping into the British fashion and knitwear mainstream.

Allow these wickedly unique minds, which have been running the label since 1998, to speak for themselves. We had a quick chat with the duo about punk fantasies, controversial kitchen utensils and more…

How did Electronic Sheep come into existence?

Helen: Brenda won a knitwear design competition and with the award money the label began. Brenda wanted me to help out with graphics and we started to do graphic knits (jacquards) – it was just a natural progression of both our disciplines – knitwear and graphic design. We have a very similar aesthetic, which probably stems from the fact that we’ve been friends since we were eight years old. We grew up next door to each other, hung out, went to the same art school, etc. so something was bound to happen!

You’ve said that your AW16 collection is inspired by Gerturde Stein and Parisian Bohemia. Can you talk about that further?

Brenda: We were struck by how modern the bohemian creative scene in Paris is to life now even though it was 100 years ago. The cafés in Montmarte, the clothes, the parties, the relationships all felt kind of familiar to our lives now.

What piqued your interest in the subject in the first place?

Brenda: I was reading the book The Autobiography of Alice B.Tolkas by Gertrude Stein. It is in fact the autobiography of Gertrude Stein and is ‘a roll-call of all the extraordinary painters and writers she met between 1903 and 1932’. These include Picasso, Cezanne, Matisse, Hemingway and Fitzgerald. As soon as I started reading it I was really engrossed and influenced by it. When I spoke to Helen about the book it reminded us of all the artists who influenced us from our art college days, and it fit perfectly with our AW16 collection plan to celebrate 100 years from today back to 1916.

What aspects of the collection do you feel reflect Parisian Bohemia?

Helen: Firstly, our drawings (knitted jacquards) depict scenes that are inspired by the Parisian creatives of that time. For example, we have figures like Boy Capel (Chanel’s then boyfriend) standing next to a girl with a flower for a head. So it is a mix of our imagination and these bohemian characters.

The style of the garments was also influenced by the casual, though very considered style, of the artists of this era. The women on this scene also wore masculine clothes and had a strong sense of style. This can be seen in our cravats, tied triangles and matching co-ordinates – we even have a ‘three-set’ that includes matching skirt, top and waistcoat.

You certainly have some unique designs and pieces (Picasso eating a plate of spaghetti, to name one), which would you say are your favourites?

Helen: One of our favourites is a blanket scarf called ‘Artist Party’ and sums up the collection really. It is a massive illustration that we made up about a party that might have happened in Gertrude Stein’s house in 1916. We loosely reference some of the décor and art that she had on her wall, and include some of the characters that would have been there, like Picasso and his girlfriend. Then we threw in everything that we wanted to say, including some other women that we would like to be us. We added other historic pieces like a chair from 1916 by Irish artist Eileen Gray but mainly we wanted to have fun. For example, Marcel Duchamp being hit on by an androgynous barmaid, while he flirts with a woman on the stairway, Gertrude drinking absinthe and Picasso eating pasta…

Have historical moments always been a source of inspiration for the brand? If so, can you talk about the relationship between Electronic Sheep and history in general?

Brenda: Yes, very much so and often collections have been inspired from our own history. We grew up on the north side of Dublin on what is now the famous ‘Cedarwood Road’. Bono, Gavin Friday and Guggi Rowan all grew up on our street. So as kids we saw a lot of colourful activity in the area!

Our childhood directly inspired two collections ‘Red Lemonade’ and ‘Pussy’s Leap’. The first was about sugar induced birthday parties of the late 70s and all the crazy fizzy drinks, soda streams and penny sweets that were the centre of our world. The later ‘Pussy’s Leap’ was about a ‘true’ ghost story that Helen’s father told us with great sincerity, and terrified us into creative depictions. 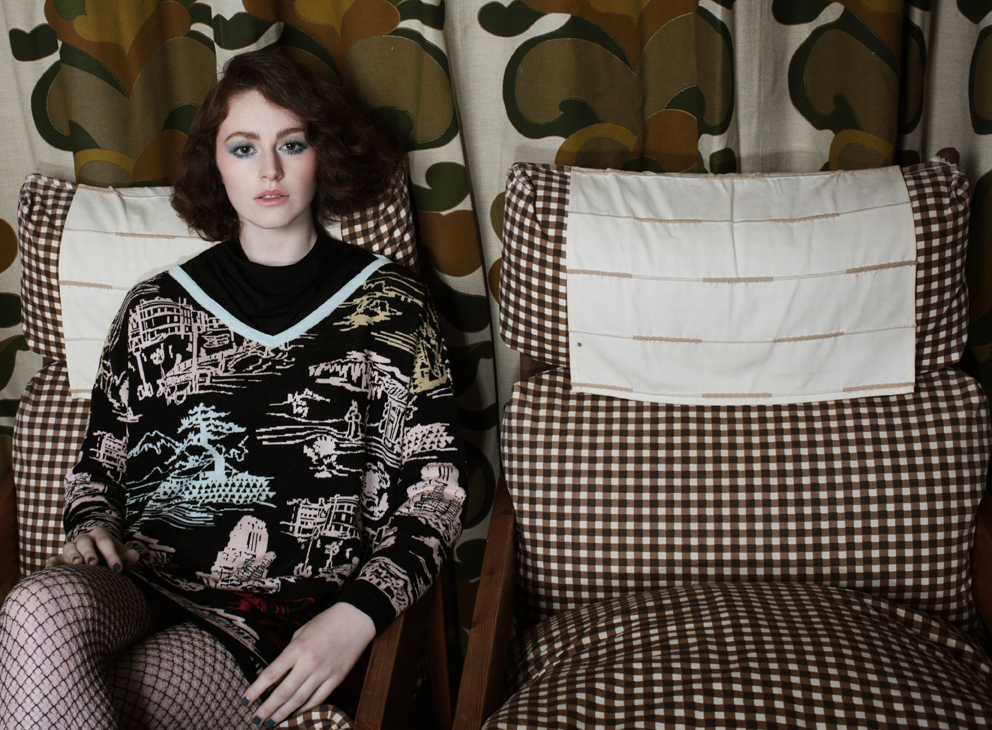 How has Electronic Sheep’s aesthetic transformed over the years?

Helen: I think our aesthetic hasn’t changed so much as our techniques and skills have. We have both worked in the design industry as well as on Electronic Sheep over the years, so we are stronger as designers because of time and we have applied ourselves and learnt as much as we could on our way. Brenda worked as a knitwear technologist as well as a designer and my background is in graphic design so all of that has transformed our work over the years. We have managed to make jacquards (illustrations) more complex and detailed than ever before by working hard on technique and design. We are also more focused now and our experimentation is based on our skills and knowledge rather than flights of fancy.

The AW16 collection consists of various collaborations with artists and historians, what would be your dream collaboration?

Brenda: I would love to do a collaboration with Miu Miu as I admire their work and think our aesthetic would work for the label. Helen would like to work on a film with Quentin Tarantino and have his leading heroine dressed in only Electronic Sheep.

What has been your most striking moment, either as a duo or for the brand itself, thus far?

Helen: One striking moment was when we won a design award for a collection that in general had been dismissed as a bit controversial. It was called ‘Homage to Butchers’ and innocently (we thought) featured meat cleavers, joint knives, etc. After producing an extensive collection, the money from the award couldn’t have come at a better time so it ‘literally’ saved our bacon!

What’s your relationship with music? We heard there’s some punk rock kicking around in there.

Helen: Brenda’s and my background is more your traditional rocker, but we did end up marrying punk rockers! As teenagers the plan was to run away with a rock band. Music has been probably the biggest influence on our work and lives but we never got into a band in the end. The closet we got is Brenda’s husband started a DIY record label called Greyslate, and mine was in garage punk band, Pet Lamb.

Where do you see Electronic Sheep in five years’ time?

Brenda & Helen: We would like the label to have lots more aspects to it, not just knitwear, but other clothing and accessories and creative projects. In this financially driven world we aim to maintain our integrity and genuine creativity and be recognised for that too.

And ideally we would like to have a manager to handle everything and anything boring so we would only have to do creative stuff!