The alternative rock quartet – made up of Toby Spysznyk, Milo Burgess, Jake Tullett and Mikey Laws – are all in their early twenties and were brought together by their love for grungy guitar sounds and soaring melodies. ‘Showdown’ showcases the minimalist riffs of Burgess with bleak and provoking lyrics. “Where’s your conscience now?” Spysznyk demands throughout the song’s dark undertones. Think Queens of the Stone Age, but then think again.

Experienced performers through previous attempts at the dream, the four blend together suburban anger of their youth with melodic songwriting centered on memorable hooks. Songs are born from ashes of heartbreak, growth and a determination to escape the small towns to some sort of impact on their listeners and further afield.

Catch Bisou Noir at their debut live show, where all of the above comes together under flashing lights, at The Finborough Arms on 15th December, and keep an eye out for multiple dates in early 2019.

‘Showdown’ is out now. 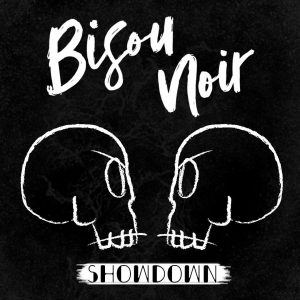