Reverend and the Makers: Jon McClure and Co. Seek Inspiration in Thailand for Their Often Unconventional Sixth Record

Reverend and the Makers are due to release their new album, The Death Of A King, later this month and it marks a strong, musically diverse return from a band that has long since shedded it’s basic indie landfill associations. The Death Of A King is the band’s sixth LP and follow up to the critically successful Mirrors. Mirrors was recorded in Jamaica and this time around the band decamped to Thailand for inspiration. The result is an album which does away with many of the typical conventions of an indie rock album.

The album opens with the one-two of the shuffling ‘Miss Haversham’ and the acoustic piano led ‘Auld Reekie Blues’ which swells with ’60s inspired doo wops, setting the tone for an album which explores diverse sounds and styles. The early transition into instrumental ‘Bang Seray’, which swells with sitars and eastern influences reflecting the impact of recording in the town of the same name in Thailand, is the first sign of the unconventional approach taken to so many compositions on The Death Of A King. ‘Carlene’ is a simple one minute love ode, whilst ‘Black Cat’ has vaudeville inspired horns, ringmaster-esque vocal interplay and some of the strongest writing on the record.

‘Too Tough To Die’ is the track with the most punch in the guitars, coming closest to their traditional indie rock roots, although they have always veered away from the typical sound of the bands they rose with in the mid-noughties. Tracks such as ‘Monkey See, Monkey Do’ have similar moments but are cleverly composed, with the ‘plugging in’ part way through elevating the track and its guitar solo to a standout moment on the record.

The video for ‘Too Tough To Die’ is an extract from a film shot by Shaun James Grant, following the band on their arrival in the country and the recording process as they arrived in a remote village only for the king of the country to die, and the track is driven by a sense of defiance that has long informed the bands work. The tracks on The Death Of A King also reflect Jon McClure’s changing outlook as he enters his mid-thirties and encounters a “new set of concerns” that are different to the man and band who made ‘Heavyweight Champion Of The World’. McClure sees, “the world in a different way now so I’m trying to be true to who I am today.”

The album is punctuated by McClure’s infamous drawl, delivering patronising tones on ‘Boomerang’  as he sings “you tried to sell ice to the Eskimos” with the kind of vitriol that few others from his generation can deliver. However, the group was founded as a collective of musicians and this spirit is revisited, with a number of guest vocalists and band members supporting; Joe Carnall on ‘Juliet Knows’, Ed Cousens on ‘Auld Reekie Blues’ and Laura McClure on ‘Black Flowers’. The deluxe version of the album features The Corals James Skelly and poet John Cooper Clark. The collective spirit was explored more broadly during the recording process as well, with the band members families joining in. Ryan Jenkinson‘s wife played bass on a song, McClure’s children also joined in with backing vocals

There is a question as you listen through the album of how much will stick in the memory, and some of the closing tracks (‘Time Machine’, ‘Juliet Knows’) tail off and do not have the same impact as the early stages of the album. Nonetheless, The Death Of A King is a really intriguing album, packed with ideas and stylistic changes, without sounding disparate or confused. With many tracks under three minutes, the album passes quickly but leaves the feeling of a band that has matured over the years and continue to go from strength to strength, without feeling the need to be the same band it was a decade ago. That said, they have still enjoyed critical success and consecutive Top 20 album releases, and The Death Of A King looks like being no different.

The album was recorded at Karma Sound Studios, Thailand and 2Fly Studios and 1984 Studios in Sheffield with production by Dave Sanderson.

The Death Of A King is released on Cooking Vinyl on 22 September and is available to pre-order HERE.

Will and the People support the band on tour this autumn. Dates below. 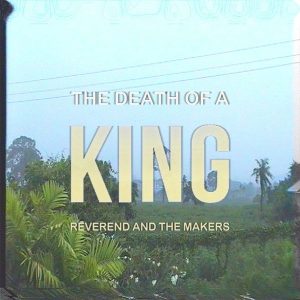