The Joy Formidable @ The Lexington: An Exciting Preview of What’s to Come from New Album, AARTH

North Wales’ The Joy Formidable continued their European tour with a stop at London’s The Lexington and delivered an exciting preview of what was to come from their new album, AARTH, and their Reading and Leeds Festival sets the following weekend.

The band emerged with searing one two of ‘Greyhounds In The Slip’ and ‘I Don’t Want To See You Like This’, instantly demonstrating their ability to utilise loud-quiet dynamics, instrumental layering, and lead singer and guitarist Ritzy Bryan‘s soaring vocals, to create the kinds of richly composed alt anthems which have endeared them to so many over the last decade or so.

The set-list transitioned from the defiant stomp of ‘I Don’t Want To See You Like This’, via the melody heavy, pop leaning ‘The Greatest Light Is The Greatest Shade’ and round to the experimental classic rock of ‘Passerby’ with ease. As a three piece they played with great natural chemistry. The musicianship was tight, the breakdowns controlled but played with a sense of freedom and their stage presence almost effortless, with guitarist and keys player Rhydian Dafydd providing notable backing vocals throughout. The strength of their relationship came across in both their performance and the interludes between tracks, with one segment discussing Ritzy’s clumsy nature and trolls particularly memorable.

The band also played a delicate reworking of early track ‘Ostrich’. Breaking the track down to a piano-led opening section added extra reverence to the message of self-exploration and forgiveness underpinning the track. However, the band sounded at their best on their most propulsive tracks, blending rich melodies, cathartic lyricsm, electro pop influenced synths and keys with thick guitar lines and the powerful and dynamic drumming of Matthew Thomas. The best examples of this on the night were ‘Cradle’, ‘Whirring’ and ‘The Ladder Is Us’, all of which drew fantastic reactions from a knowledgeable audience.

The setlist had all the makings of a warm up performance for their main stage appearances at Reading and Leeds, packing a number of their biggest hits into a relative short performance. That said, when you consider that some of the tracks missing include ‘The Leopard And The Lung’, ‘The Everchanging Spectrum Of A Lie’ and ‘Fog (Black Windows)’, it is clear that the band are capable of much bigger stages and their pending US tour supporting the Foo Fighters is testament to this.

There were also only space for two tracks from their upcoming fourth album AARTH on the night – second single ‘The Wrong Side’ and the dark, searing ‘Y Bluen Eira’. Both demonstrate the continued evolution in the band’s sound. There are the same intense rhythms, progressive songcraft and inventive guitar work that has been their trademark to date, but the album promises further evolution, with their time spent on tour recording impacted by global socio-political change, as well as the countries and environments they have found themselves. The result is a collage of influences funnelled into The Joy Formidable’s own unique brand of rock, leading to an explorative and often inward leaning record that has great promise.

AARTH is released on September 28 via Hassle Records on CD, download and LP as well as an extremely limited boxset, Indie retail exclusive vinyl and Rough Trade exclusive vinyl, which will be supported by in-store performances in Nottingham, Bristol and London in September  and October – details below. The album release will follow a US tour supporting the Foo Fighters. 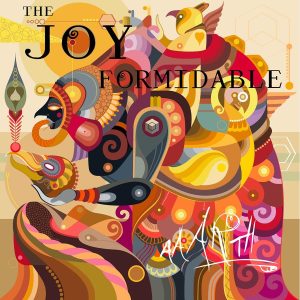