Motherwell’s The LaFontaines emerged as an effervescent bundle of passion and energy with their debut album, Class (2015), having formed earlier in the decade. Their widespread live and festival presence since has helped build a strong following across the UK and a signing to A Wolf At Your Door Records followed. This week saw the release of their sophomore record, Common Problem, which sees their frustrations with the society around them on the brink of boiling over.

The LaFontaines music merges rock riffs, punk ideals and hip hop rhytmns into a music melting pot. This may immediately bring to mind the often regrettable nu-metal moments of the late nineties and early noughties. However, their music is underpinned by a deeper social commentary, which informs their lyrics and on the whole this elevates them above any otherwise unwanted comparisons.

Album opener ‘Armour’ sets the tone, with crunching guitars providing the platform for the band to reintroduce themselves through the distinctive vocals of lead singer, Kerr Okan. There are also moments of reflection on the environment and society in which they have risen, with the boxing and religious motifs drawing common ground with many of the hip hop lyricists that have come before them.

However, these moments of social observation are often frustratingly fleeting and underdeveloped, with ideas of social welfare, familial breakdown, war and mental welfare all explored in the house influenced ‘Asleep’. None are given a full exploration, instead the band densely packs the track with messages, as though their frustrations are so deeply rooted and numerous they all boil over at once.

Nonetheless, the band show they are capable of more focused messaging on ‘Explosion’, a call to arms for the suppressed and alienated youth in a post-Brexit society, and musically it also provides one of the album standouts. There is rarely anything too complex in their compositions or instrumentation but the inclusion of a haunting vocal sample here and the growling guitars complement the urgency of the message. It is this message which dominates the record; the rebellion of the financially and socially repressed, suffering with real life issues such as interest rates and unemployment, relationship breakdowns and the helplessness that many feel in being unable to improve their own position.

Musically, there is more variation on their second record as they sound like fellow Scots, Twin Atlantic, on ‘What Do I Know’ and Paramore’s recent pop explorations on the title track (with its memorable funk infused chorus). It is these moments that sound musically best, exploring melodies and rhythms and furthest from the unfavourable nu-metal comparisons. This may be a reflection of the benefits of working with producer, Joe Cross, who has previously worked with The Courteneers and will have undoubtedly added to the musical palette in the studio. The group’s varied musical influences were clear on their debut but seem to be explored even more fully on this record, with Class a more straightforward modern alt rock record.

Kerr tows the line between singing and rapping throughout, and favouring spoken word to deliver his verses. Nonetheless, he proves his ability to sing on ‘Hang Fire’ and ‘Goldmine’, an equal to his many compatriots in the UK alt rock scene and label mates (past and present), such as Mallory Knox and Deaf Havana. The spoken word sections meanwhile allow for tone variation, conveying both anger and apathy in equal measure, and the delivery of their thickly packed messages. This double threat is the most immediate distinguishing factor for The LaFontaines, but it is their social observations which ultimately carry the album.

Common Problem is an album packed with rage and frustration, channelled through a genre melding hip hop rock fusion that sounds dated in places but delivers surprising moments of variety and musicality across the course of the record. The band’s second full length release is carried by the palpable sense of frustration and angst and it is these feelings which so many others will share with them, making them an important addition to the current music landscape. With their ever growing musical evolution and development they promise to become an ever more important and unique proposition in the alt rock scene.

Common Problem is out now via A Wolf At Your Door Records. The LaFontaines tour the UK in November in support of the release, with dates below and tickets available HERE. 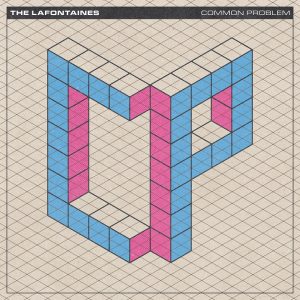